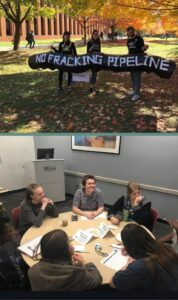 Justice Environmental Alliance (SEJA) is looking to make an impact, not just on Mason’s campus, but in surrounding areas of Northern Virginia. SEJA aims to empower students to take action for a healthy planet, build a diverse movement within the Mason community, and campaign for fair and equal distribution of environmental protection for all communities.

“While there are environmental groups at Mason, there wasn’t one focused specifically on Environmental Justice. The founders of the club hoped to close this gap and allow students to learn and get involved in issues surrounding inequity and the environment” said Treasurer Elizabeth Fortson.

The origins of SEJA trace back to the spring of 2017, when the name was originally the Virginia Student Environmental Coalition.

“Mason implemented a policy change so that we couldn’t include “Mason” into the title. We changed the word “Mason” to “Student” to be in compliance with this policy,” Fortson said. “The purpose of this organization is to campaign for the protection of the environment and its inhabitants through advocacy, activism, and education. We define the environment to include the physical, social, economic, and cultural conditions where we live.”

SEJA works directly on campus to do workshops with students on how to get involved with pressing issues such as the Mountain Valley Pipeline, a natural gas pipeline that is currently under construction and spans from southern Virginia to northwestern West Virginia. It is a current project that is being sued for environmental impacts such as erosion, and sediment impacts. These types of projects can cause vulnerable populations like minorities to be put at risk for climate change impact, fossil fuel production, and an increase in toxins.

“Virginia still relies heavily on fossil fuels, and poor communities/communities of color bear the brunt of the burden. Mega-landfills, pipelines, and other sources of pollution threaten community health and well-being and it’s difficult for people to seek justice or protection from these issues. SEJA hopes to raise awareness and contribute to other group efforts to combat these problems” Fortson explained.

“SEJA focuses on making sure Mason also embodies the principles of environmental justice. This can include projects to make the campus more “green” or projects to make “green” initiatives more accessible or better reflect all student needs” said Fortson.

SEJA has participated in protests like the Climate Rally in 2019, as well as Mason Pipeline Protest to increase awareness among students and others out in society.

“SEJA also has meetings about defunding MPD as well as VEJS and other opportunities that all pertain to environmental justice issues among society. Some future meeting plans revolve around ideas like fossil fuel usage, the link between Mason and the Koch Brothers” said Fortson.

SEJA is just one of the many unique clubs we have on campus that is looking to better our environment and create awareness.