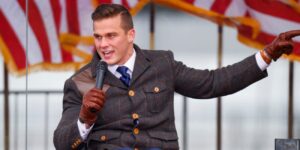 Has Mason lost its morals when inviting speakers to speak?

On Nov 18., the Mason chapter of Turning Point USA hosted Representative Madison Cawthorn of North Carolina’s 11th congressional district in The Hub Ballroom. As a part of the Congressional freshmen class of 2021, Cawthorn is currently the youngest member of Congress elected since Jed Johnson Jr. and the first to be born in the 1990s. Cawthorn had spoken at Turning Point USA events before, and according to TIME, “lightly threatened” patrons to support election integrity at an event in West Palm Beach, Fla. in December 2020. At that same event, Cawthorn stated that he would try to contest the 2020 presidential election results.

Representative Cawthorn’s short time in Congress has been notable for his controversial nature, which he later stated while answering questions at the event was a part of the “left-wing media’s attack” on him. Some of his controversies include lying about his Naval Academy application being accepted, over three dozen people alleging that Cawthorn harassed women in college, his position at Representative Mark Meadow’s district office, posting an Instagram picture at Adolf Hitler’s vacation residence, attacking journalist Tim Fiedler, addressing the crowd before Trump supporters stormed the U.S. Capitol and offering Kyle Rittenhouse an internship after his verdict among other controversies.

Cawthorn had started the event early because the vote on the Build Back Better Act was passed through Congress by a vote of 220-213, according to NBC News. Cawthorn was one of those 213 representatives to vote “nay” on the bill before it went to the Senate, which he stated in his speech.

At the event, the 26-year-old Cawthorn talked about how detached some politicians have become in Washington because of their experience.

“You know, most of them [politicians] have been in Washington longer than we have been alive, namely Mitch McConnell and Nancy Pelosi,” said Cawthorn. “For myself, I’m 26 years old, imagine how detached they are from what it is to be a normal American.”

Cawthorn explained the reason he ran for Congress was that he wanted to “save” our radically changing generation for future children. Following up with talking about Judeo-Christian values and the importance of self-governance.

Cawthorn remarked that there isn’t a set idea of what it means to be in Congress, “You don’t have to be 55 years old wearing pleated pants and castle loafers to get elected to Congress, you should go to Washington D.C. and you can make a difference”

He then called Speaker of the House Nancy Pelosi a “menace” and stated that he loves reminding her that she’s not God.

In terms of education, Cawthorn called public education “government schools” and “indoctrination camps”. He also stated that calling parents who voice their opinion at school board “domestic terrorists” is un-American and that they are trying to “break up the family unit”.

It is now three months later, and Cawthorn hasn’t let up on his controversial nature. Cawthorn is currently being challenged with running for re-election in North Carolina because he allegedly violated Section Three of the Fourteenth Amendment, known as the Disqualification Clause.

This section of the Fourteenth Amendment was implemented during the Reconstruction Era against former Confederates trying to reclaim office in Washington. Cawthorn will have to prove that he is not an “insurrectionist”, or he will be disqualified from holding office by the Constitution, according to The New York Times.

Meanwhile, his mentor and former White House Chief of Staff, Mark Meadows, is currently facing charges for not complying with the Jan. 6 Committee. According to CNN, the House voted to recommend that the Department of Justice pursue criminal charges for failing to appear for a deposition.

So why did Mason allow Cawthorn, with all of his controversies, to speak here? Mason has to be more mindful of who it allows to represent the university. And while the Mason chapter of Turning Point USA has every right to hold events and assemble together to speak about Republican issues, a line has to be drawn when inviting public figures to speak at Mason.

Democracy in the United States was attacked on January 6th, 2021, and if the preservation of democracy is to continue, alleged insurrectionists must not be in office, or speaking at Mason.

LETTER TO THE EDITOR: TO IMPROVE LABOR AND LEARNING CONDITIONS, WE NEED WORKLOAD REDUCTIONS FOR WRITING-INTENSIVE COURSES