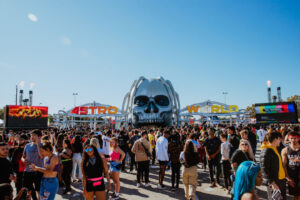 As 10 victims have been confirmed from the festival, where did Astroworld go wrong?

On the evening of Nov. 5, rapper Travis Scott’s third annual Astroworld Festival was held on the grounds of NRG Park in Houston, Texas.

Encouraging fans to “Open your eyes to a whole new universe,” the festival promised a weekend of letting loose to music from one of the country’s most popular rap artists. After a violent crowd surge trampled multiple attendees under a sea of concertgoers during Scott’s headlining performance, 10 people, including two minors, have lost their lives.

Having operated for two years prior to this installment, Astroworld Festival was quickly recognized as one of the wildest and most anticipated festivals in rap music, with this year’s show featuring performances from Scott, SZA, Young Thug, Roddy Ricch, Baby Keem and Don Toliver — just to name a few.

Early in the day, during the sets of Don Toliver and Master P, reports of the crowd’s energy and density were cause for concern amongst festival attendees as the high density of the moshing crowd left some with bruises and other small injuries.

It is important to note that this can be normal as everything from moshing, jumping around or “raging” are expected when attending concerts of high-energy genres.

However, there are also many reports of fans jumping over fences and running through security checkpoints, making it difficult for security to control the number of attendees.

Similarly, in 2019, many people were seen knocking down fences with hopes to find a good spot to see the show, whether they had a ticket or not.

Additionally, prior to the show, Scott stated in since deleted Tweets and Instagram posts, “NAW AND WE STILL SNEAKING THE WILD ONES IN,” implying that fans without tickets could still find another way into the show that Scott and his security team would approve of.

While all of this (moshing, hopping fences, etc.) can be considered normal concert behavior, this relies even more heavily on the expectation that security, event management and medical teams know exactly what they are doing in this setting — and Astroworld seemed much more permissive of the safety issues they encountered, rather than being interested in engaging in harm reduction.

As the day continued, not much seems to have been done as a result of the earlier reports as fans awaiting Scott’s headlining performance reported being so tightly packed together that moving around to escape the crowd had become impossible. As the crowd continued to compact, many attendees reported having difficulty breathing.

During this time, a countdown in the center of the main stage continued preparing concertgoers for the show’s impending start as the crowd continued to compress.

Between the show’s start and the 70 minutes before it ended, many guests were trampled, killing 10, as of Nov. 17, and injuring hundreds more before the night was over. As Scott’s fanbase appeals to younger audiences, some of the youngest victims were a 14-year-old and a 9-year-old, with the oldest victim being 27.

This should never happen at a concert. This should not have to be said, but clearly it needs to be. One might believe, as I had, that we have come a long way since the concert violence of the past. After all, many of the concert tragedies Generation Z are familiar with relate to mass shootings and terrorist threats, while trampling tragedies such as this are quite rare.

The most deadly trampling event at a concert, as of Nov. 17, remains The Who’s 1979 concert disaster in Cincinnati, Ohio, when an onslaught of fans brought on by the sound of the band warming up inside Riverfront Coliseum pushed through the doors of the venue — killing 11 people in a stampede.

While Astroworld 2021 remains just one casualty shy of breaking this record, I personally find this event much more traumatizing as it occurred in the midst of the show while people were doing exactly what they came to do.

Additionally, Astroworld fans were trampled during the many instances of fence jumping and security rushing that occured. It seems that, while other concert tragedies seem based in isolated instances, Astroworld festival allowed for every possible crowd problem to occur as it even promoted aggressive behavior through Scott himself.

It seems the event was so poorly managed and so horrifically executed that many people were simply unsatisfied with the notion of this being accidental. During the show, Scott couldn’t even be bothered to take a break to respond to the screaming crowd, desperately pleading for help.

Due to this, some engaged in a satanic panic, alleging that Scott sacrificed these fans for eternal success. While others were sucked up into a conspiracy about an attendee running around injecting guests, including a security guard, with an unknown drug.

If you ask me, all of this serves as a distraction from the real problem with this event: lack of harm reduction and crowd control. Given that high-energy concerts often attract rowdy crowds and rampant drug use, it is up to the individual artists and event promoters to know their crowds in order to ensure safety for their very own fans. This is why every festival should have at least one medical tent to provide support and hospice for those who are injured, overdosing, overheating or whatever the problem may be.

Additionally, given the history of violence at Scott’s shows resulting in multiple injuries, it seems it was only a matter of time before an uncontrolled problem such as this unfolded and Scott could have easily stopped the show at the first sign of discomfort in the crowd.

In the minds of festival promoters, it should be even more important to promote a level of safety, as reducing the number of injuries or deaths experienced at a show will help build the case for holding it again. Now, because of this, the Astroworld Festival might never return.

Had the concert been better managed, with more safety precautions and an escape plan for guests when the crowd became too intense, it is possible the attendees who lost their lives would have returned home with a positive story about the preparedness of the festival. Instead, their surviving families and friends may never feel comfortable attending a concert again.

THE EFFECTS OF FACEBOOK AND MISINFORMATION ON MASON STUDENTS