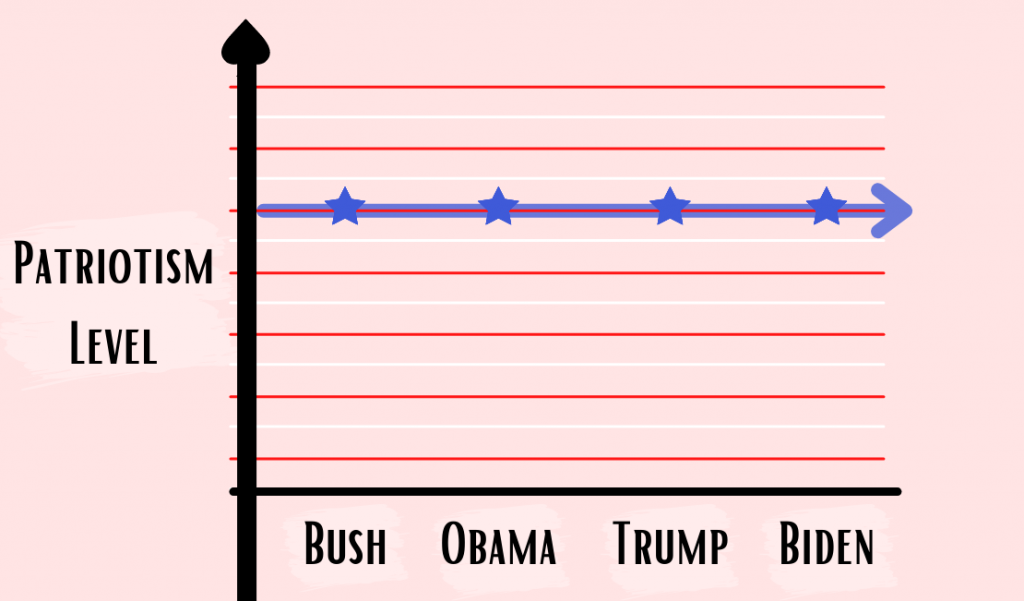 What does it mean to be a patriot? Here at George Mason, we refer to ourselves as patriots, and even the school historians aren’t sure why. Sadly, I see many people’s feelings of patriotism for their country depend on who wields the power. If your patriotism waxes and wanes depending on which party is in control, what you are feeling is not real patriotism.

If someone felt patriotism when Obama was president, then flipped when President Trump won the election and believed America was a thing to be hated, only to flip back when President Biden was inaugurated, that is not patriotism, it’s a light switch of feelings. When elected officials or members of the military enter their positions, they take an oath to preserve and defend the U.S. Constitution, regardless of who is the president.

Patriotism ought to be directed towards one’s country, not the institutions that make it up or the leaders who run it. That would be closer to nationalism, which seeks to preserve the institutions of the nation as they are subjectively perceived, rather than the values that built those institutions. What spurs one to action are the values espoused by the country, both at its founding and at key victories in the history of its progress. A true patriot is awakened when those values are attacked or neglected.

So why should we call ourselves American patriots? Why should we even be patriotic? Because if we don’t have any pride for our identity, we will either hate ourselves or the group our identity is tied to — probably both. Without a love of something, there is no desire to improve it or get to know it better so that it improves us.

As I’ve previously indicated, the November election did not produce the results I hoped for; nevertheless, I still love my country. I believe true patriotism does not consist of loving our leaders, nor every aspect of our history, nor all traditions, nor all institutions. Rather, it is a love for the ideal a nation strives towards. For America, that is, as Thomas Jefferson penned, “life, liberty and the pursuit of happiness.” We’ve never perfectly achieved this goal for all, but we strive towards that ideal. My great concern is that too many of my fellow Americans don’t see patriotism as an exercise in pursuit of an ideal, but as a scramble for who controls the state.

Although I disagreed with virtually all of President Obama’s domestic policies and much of President Trump’s conduct, I never lost my patriotism for America. My patriotism is tied with my nation’s values, not with the flawed people who steer the ship. Patriotism is the conviction of staying the course.

We all want to lay anchor in the harbor of justice and prosperity, but I carry no expectation of arriving at perfection with an imperfect crew. Patriotism is the drive that helps us weather the storms of lies and fight against the currents of hatred. Sinking the ship because you hate the current captain causes us all to drown.