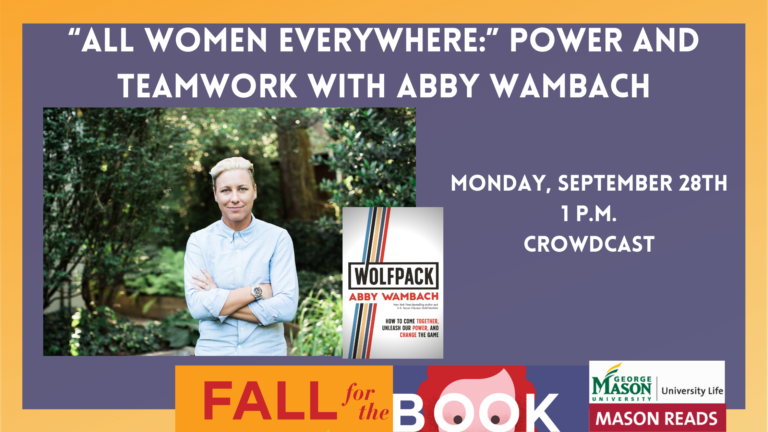 Every year Mason freshmen are required to read a book intended to inspire community and conversation around a specific, timely topic. Whether the book is on civil rights, feminism or climate change, each Mason Reads selection holds a lesson — or many — that are valuable to not only freshmen but to all Mason students and faculty. This year was no different.

On Monday, Sept. 28, Abby Wombach talked with President Gregory Washington about her book, this year’s Mason Reads selection, “Wolfpack: How to Come Together, Unleash Our Power, and Change the Game.”

During her decade-long career as a soccer player, Wombach won two Olympic gold medals and led the U.S. Women’s National Team to victory at the 2015 FIFA Women’s World Cup. Known to be a force on the field, Wombach was a leading international goal scorer for most of her career. Now she is a New York Times bestselling author.

“Wolfpack” is a book of lessons on leadership and community, specifically on how women can change the way leadership is seen and sought in a world largely ruled by men.

During her talk with President Washington, Wombach described the moment when she knew that she was going to dedicate her life to activism.

Wombach talked about her final time on the stage as a professional soccer player, while accepting the FIFA Awards with Lionel Messi in 2013. As she walked off stage, Wombach worried about how she was going to pay her mortgage now that she was retired — a worry she realized her male counterpart would never face.

This launched her decision to speak on issues that affect more than just female soccer players. Pay equity is a cause for women everywhere and Wombach is committed to ensuring a future where women are empowered and paid for what they’re worth.

“You need to have like-minded individuals to hold you up and walk your life with you,” Wombach said. Finding your community is a key element that she discusses in “Wolfpack.”

To Wombach, it is important to find people who will hold you up and support you in life, along with people who challenge you to change for the better. In other words, “find your pack.”

Regarding leadership, Wombach pointed out confidence as the key. Drawing from her experience as captain of her team, she talked about the many times she doubted herself and how it ultimately hurt her team.

“People can see when someone doesn’t trust themselves,” she said. “No one wants to follow that person.”

Like everything of value in life, finding the confidence and the community you need is a journey, and not an easy one at that.

Wombach warns that If you choose to “level up,” expect discomfort. “So much discomfort that you want to take your ball and go home,” Wombach said.

Though Wombach is no longer a leader on the field, she has dedicated her life to making sure that every other woman gets the same shot she did.

Culture
books Fall for the Book mason reads so