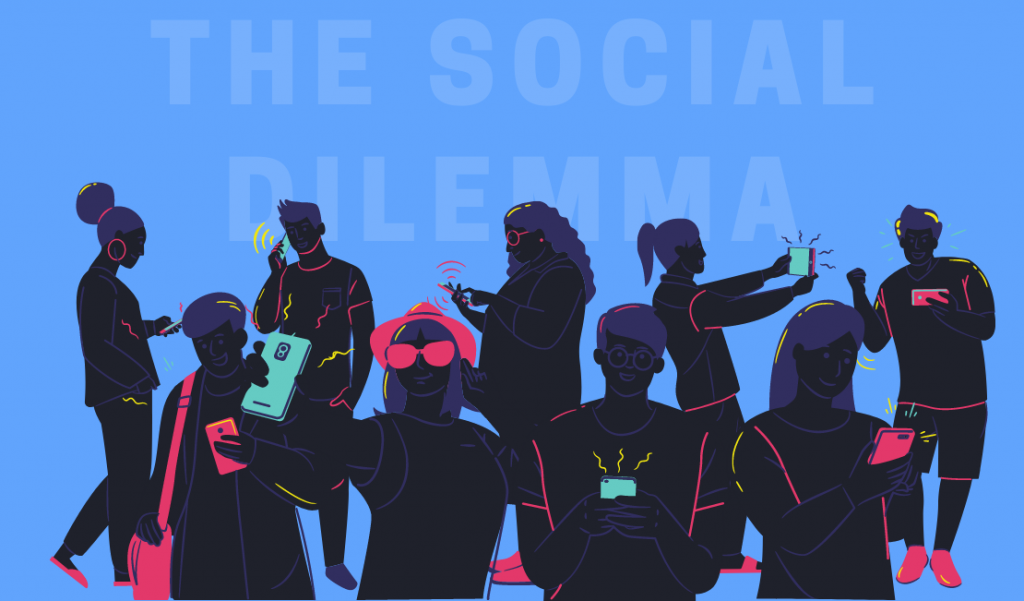 Some people dive into swimming pools headfirst. I prefer to dip my toes in the water, hoping for the right temperature. The online whirlpool of social media always felt too hot for me. It took years for me to wade in and get a social media account.

Once I was in the pool, I realized the temperature wasn’t quite right. I began to spend more time on my phone while my in-person interactions suffered. I became addicted. It got so bad that I had to ditch all of my social media accounts at the beginning of last year. The new Netflix movie “The Social Dilemma” attempts to go in depth about why this happened to me — and others. The key word here is “attempts.”

I’m someone that was aware of the dangers of social media before watching the movie. Being more of an outsider to the online environment gave me a different view. That’s probably why I hated watching this movie. I was surprised to learn that the movie has accumulated many positive reviews from both critics and audiences.

I rolled my eyes so much that I thought they were going to fall out of my head. It’s an over-dramatized, over-budgeted movie that had so much potential to be so much more.

My frustration with the film is amplified by my own failure to stay off social media. COVID-19 has locked us all away from each other and I turned to technology to hold onto some sense of connection. During this pandemic, many others have turned to social media like I have.

The greatest problem this movie had was its obsession with imaginary narratives. Infusing fictional scenes into a “documentary” completely undercuts the entire point of a documentary. Documentaries dramatize truth, not fiction.

For some viewers, the movie could conflate truth with fiction to the point where they leave the film not being able to remember what was real and what wasn’t. That’s especially disheartening because confusing truth with fiction is exactly something that the movie is trying to warn us against.

I felt as though the creators were worried the audience would get bored of the content. Online socialization is something most viewers can find relatable. In America alone, 81 percent of people have a smartphone. The movie’s content was already interesting. They didn’t need the theatrics to keep our attention.

The most painful part of this “documentary” is how much potential the filmmakers had to make their arguments land without all the nonsensical gimmicks. They had great interviews with credible guests. There are many studies that prove how we are growingly addicted to our phones. But instead they chose to spend half the movie’s runtime on a fake narrative.

They should have solely relied on all the real-world examples of how social media can dangerously affect our offline worlds. This year alone has been a minefield of misinformation with COVID-19 conspiracy theories. From the misleading viral film “Plandemic” to the misinformation campaigns to influence our presidential election, there is no shortage of lies online.

Those examples should have been used in the movie. It would have showcased to the viewer that they may have been the victims of this pattern as well. Additionally, the filmmakers should have shown people how they can verify information on their own. It’s not enough to warn your viewers, you have to empower them. Without a solution, people will just resort back to their old habits.

Watching former tech industry employees talk about the data mining atmosphere was one of the movie’s strongpoints. They were giving vital firsthand experiences that elevated the credibility of the movie’s message. Sadly, they just kept this consistent “your phone is hacking your mind” tone that only scares the audience. All the points they made were valid, but the film strung their messages together in an overly apocalyptic fashion. The filmmakers should have asked these guests how we get out of this mess. I kept waiting for a little ray of hope, but it never came.

The film could have shown the potential the internet has to do positive things. Social media has been used for mutual aid campaigns to feed the underprivileged. It’s allowed for new forms of creative expression. Platforms have been a new area for empowering advocacy. I wish the movie pointed out what parts of social media should be built upon, rather than torn apart.

Given its important subject matter, “The Social Dilemma” could have been among all-time great documentaries like “Man on Wire” or “Blackfish.” Instead, the filmmakers made a movie with loads of style to keep your attention, but no substance to get you to act. Movies like these need a clear, impactful message that motivates people to spread it on and off the internet.

As the days dwindle to Election Day, early voting ramps up nationwide