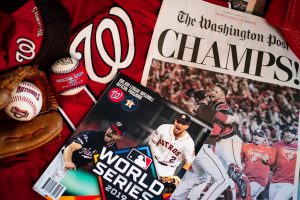 What Went Wrong With the 2020 Washington Nationals

A record of 19-31 doesn’t have the same ring to it this year as it did last year.

In 2019, it meant the beginning of one of the greatest turnarounds in MLB history. It brought the “Go 1-0 Everyday” mentality into the spotlight. It meant a miracle run through the playoffs to a World Series championship.

However, in 2020, it means a devastating reality.

The 2020 Washington Nationals were not a good baseball team. They finished fourth in the National League East with a record of 26-34.

After following bumpy roads to a beautiful place in 2019, the Nationals are left searching for answers after a disappointing 2020 campaign.

While a 60-game season does raise the valid point of sample size, the Nationals posting a .433 win percentage despite having most of its World Series core intact undoubtedly raised a few eyebrows across baseball.

So, what went wrong with this year’s team?

Most of these types of discussions revolve around injuries, so let’s start there.

This season, injuries across the MLB increased at an alarming rate, especially to pitchers. The Nationals didn’t see big cluster injuries that other teams saw. However, the injuries the team did sustain were highly significant.

World Series MVP Stephen Strasburg managed only five innings of work this season before hitting the injured list and eventually getting surgery to fix carpal tunnel neuritis in his right hand.

Sean Doolittle, another standout pitcher, threw three ineffective innings before landing on the injured list with right knee soreness, sidelining him for more than two weeks. He came back at the end of August and allowed one run in his next six appearances. However, the injury bug struck again, this time an oblique injury. With the Nationals well outside of the postseason picture, the team decided to shut him down for the year.

Lastly, the Nationals had a gaping hole in the left side of the infield as Anthony Rendon signed with the Los Angeles Angels in free agency. The team applied a band-aid by signing Starlin Castro to shore up the position. However, the band-aid got ripped off quickly when Castro broke his wrist in the middle of August and did not play again.

When any team suffers an injury, one phrase is often repeated: “Next Man Up.”

And this is where the 2020 Nationals faltered. For the past few years, the Nationals’ stars have kept the team well and alive, giving the young guys the time they need to develop. Even if they struggled, the Nats had enough firepower to win games.

But this season, the young players did not step forward as many anticipated they would.

When Strasburg went down and Joe Ross opted out of the season, Erick Fedde was immediately thrust into an every fifth day role in the starting rotation.

He did not respond well, posting an abysmal strikeout rate of 12.6 percent, which is one of the worst in baseball. While his ERA finished at 4.29, his advanced metrics suggest that his true ERA is two runs higher. 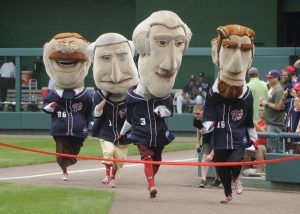 Photo by Scott Ableman for the Let Teddy Win blog. Link for License.

After Fedde, the Nats turned to Austin Voth, who started 11 games for the Nats. His ERA is 6.34 in 49.2 innings pitched (and the advanced metrics agree that is the correct number).

Perhaps the biggest disappointment of them all was Carter Kieboom. Granted, Kieboom is the youngest player mentioned thus far at 23 years old. However, he is also the most highly touted. MLB Pipeline rated Kieboom as the Nats’ No. 1 prospect entering the season, and No. 3 back in 2017 (behind Victor Robles and Juan Soto).

Kieboom only has 157 plate appearances at the major league level, so it is far too early to make any definitive decisions regarding his true talent. But a prominent prospect starting his career with a slash line of .181/.309/.232 and a strikeout rate of 30 percent is worrisome.

The Nationals’ bullpen problems from 2019 did not subside either, as manager Davey Martinez continued to rotate pieces without success.

One example of this is rookie Dakota Bacus who started his MLB career with four consecutive scoreless outings. But he ended the season with more walks than strikeouts and an ERA near 8.00.

Eventually, Martinez found one thing that did work. The one bright spot through all of the mess from this season is that the Nats found their closer of the future: Tanner Rainey.

Rainey’s biggest issue is his control. But his pitches have some of the best movement and velocity of any reliever in baseball. He posted a 7.08 BB/9 in 2019, but he more than halved it down to 3.10 in 2020. His strikeout rate of 42.7 percent is uber-elite; it is almost unachievable with a created player in the game MLB: The Show.

Even if the walks creep back up in 2021, the strikeouts are legit and here to stay. He’s going to be an all-star before too long.

With the Nats’ regular season over, they’ll get a head start on the 2021 offseason.

The Nationals quietly re-signed Mike Rizzo to a three-year contract extension earlier this month so the architect of the team will continue to work his magic.

This past Friday, Jon Heyman reported that the Nats and Martinez agreed to an extension as well.  Incredibly, Martinez will become the first Nats manager in the team’s short history to manage four consecutive seasons.

The Nats will have to make some decisions regarding impending free agents, most of whom are veterans, including Ryan Zimmerman, Sean Doolittle, Kurt Suzuki, Michael A. Taylor and Asdrubal Cabrera. Additionally, Anibal Sanchez and Adam Eaton have club options for 2021.

Regarding the open free agency period, don’t expect any fireworks. Remember, the Lerners were reluctant to break the bank to keep both Rendon and Strasburg on the team last offseason. Expect the usual high-value, low dollar deals.

For the past decade, the Nationals have been laden with veteran presences guiding the team to the postseason. This offseason might signal the changing of the guard as a youth movement attempts to inject life into Washington’s baseball team in 2021.

Testosterone limits and the policing of women’s bodies in athletics