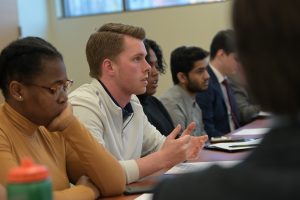 It’s all hustle and bustle in Suite 2300 of the Hub as student government preps for future initiatives and the upcoming elections.

Scholarship of the Week is one of the larger initiatives in student government’s second session.

The Mason Core Survey is a current student government effort that has been advertised across their social media. Partnered with the Associate Provost Office, specifically Bethany Usher, the ten-day survey is meant to collect opinions from the student body regarding the Mason Core curriculum.

Examples of proposed questions are “What is the best experience you have had in a Mason Core class?” and “What additions or changes would you like to see made to the Mason Core?” Students are then asked to rate the presence of outcomes such as civic engagements and critical thinking skills and their effectiveness within the curriculum.

Student Body President Camden Layton described the purpose of the survey, saying it was made “to get a general — kind of a broader view of how students feel about it.”

A campus cleanup program introduced last spring by student government and in collaboration with other RSOs is “Maintain Mason.”

Although the program was created by student government and other RSOs, any Mason student can join in on the initiative.

“We’re working with the Dean of Students to revitalize campus spirit, because that’s been low, especially with the construction,” Layton said.

Every quarter, senate members make amends to their code. A recent addition to the code is the housing board, which is made up of different constituencies who meet with administration.

“We felt like there was a lack of on-campus advocacy,” Layton explained. “So we created a student housing board where we speak with Dr. [Chris] Holland.”

Chris Holland is the assistant dean of University Life and the chief housing officer of Housing and Residence Life.

Layton continued, “We’re going to start meeting soon. We’ve got many applications, and kind of going through that is the beginning process, get people on board.”

Layton spoke on his role as the student representative in the now-ended presidential search process.

“When interviewing with them [presidential candidates], I kind of had to be the voice of all of the students,” he said.

Layton met all presidential candidates “many times” and was given time to look over resumes and the opportunity to participate in interviews.

“I think it went very well, and I think all constituencies are very happy with who we ended up picking — he was one of my top three from the start,” Layton said.

When asked about what Mason students should know about student government, Student Body Vice President Adia McLaughlin said, “Our office hours! We’re here for the students and we sit here for hours a day. These doors are always open.”

She continued, “So all we want is for people to tell us what they want to see … It’s important that if students have a complaint, or they want to see something changed or adjusted, that they come talk to us … we’re here to represent you. That’s our job.”