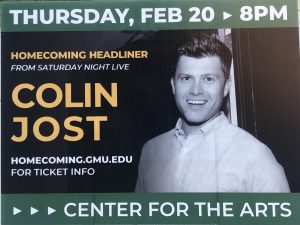 On Thursday, Feb. 20, “SNL” writer, actor and comedian Colin Jost took the stage at Mason’s Center for the Arts to discuss politics, college life, Starship robots and more. Most recognized for his role as the news anchor in the popular “SNL” skit Weekend Update, Jost displayed the more humble aspects of his comedic career as he performed a 30-minute stand-up performance for the Mason population.

The comedian opened up his set with warm, light-hearted pokes at Mason. He joked about our strange tradition of rubbing George Mason’s toe for good luck, mentioned a few odd quirks and facts about Mason history and even poked fun at the food delivery robots.

“Last week I was at the Oscars, and this week I’m in suburban Virginia; all my childhood dreams have come true,” he said.

Jost’s show mirrored that of typical comedians. He joked about mundane life such as the annoyances of technology and the struggles of traveling, but there was also depth to his humor. He masked serious commentary on the political atmosphere underneath witty anecdotes about everyday life.

For instance, Jost light-heartedly joked about the insanity of Domino’s advertising for “pizza insurance,” right before diving into contentious commentary on the political atmosphere within American society.

“I want to go back to when politics was boring,” said Jost. “Like hey, white guys, you don’t always have to speak.”

Through a thick layer of humor and entertainment, Jost prompted insightful and thought-provoking questions about controversial topics like toxic masculinity, Republicanism and discrimination within the liberal community.

The overarching theme of the show was not only politics, but also a humorous and relatable depiction of college life and culture.

Through his clever anecdotes and political commentary, Jost portrayed the essence of college life in the most entertaining and relatable fashion, including his personal experience in switching majors and having quirky roommates. He also discussed heavier topics such as what it’s like to be wary of drugs in a culture that pressures its usage, as well as the “tribulations” of online dating.

“I thought the show was hilarious,” said freshman biology major Darien Reyes. “I didn’t think he would appeal as much to the college life and lifestyle as much as he did. It was very surprising, at least for me.”

Jost focused on the normality and relatability of what life is like as a college student. He included the ups, downs and embarrassing in-betweens that make up the chaotic milestone that is the college experience.

“You really learn a lot from the people in college,” Jost joked. “You get to see people from different worlds, people that aren’t from Fairfax, but also Alexandria or Arlington — people from vast places. And I think that’s the true beauty of college.”

Culture
Colin Jost Mason's Center for the Arts Stand Up