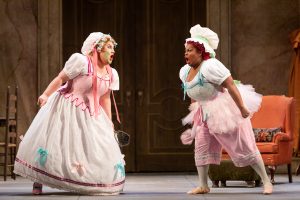 Subtitles, singers and symphonies, oh my! Gioachino Rossini’s “Cinderella,” a two-act opera directed by Kyle Lang, opened this weekend to an energetic crowd in the Center for the Arts. The last time this opera was performed by the Virginia Opera was in 1990.

To open the show, the orchestra, conducted by Artistic Director Adam Turner, set the atmosphere with a beautiful overture. The lighting and set design were a huge plus from start to finish. As the music and the mood changed onstage, so did the lights reflecting onto the red curtain, changing to a deep purple, blue, and anything else that fit the glorious orchestral sounds and sights.

After the spell-binding opening performance, the curtain rose and the story of “Cinderella” began. One of the features of the show that greatly helped was that, because the entire opera was performed in Italian, they showed supertitles above the performers so that audience members could follow along.

Rossini’s story is just a little bit different than the tale that we are all familiar with. Instead of glass slippers, Cinderella, known as Cenerentola in Italian, was outfitted with two bracelets, giving one to the prince so he could find her after she ran off. Another difference was that Cenerentola had an evil stepfather rather than stepmother.

Alyssa Martin and David Walton were an amazing pair as Cenerentola and Don Ramiro, the Prince of Salerno. Other standout performances were given by the two evil sisters Clorinda and Tishe, played by Symone Harcum and Whitney Robinson.

The comedic presence that the two sisters created onstage was perfect. They felt just as animated as the evil step-sisters in the old Disney movies viewers may have watched as kids. They were truly cast perfectly for the role.

The second standout duo was the Prince and his squire, Dandini (who pretended to be the prince in order for Don Ramiro to see the true character of the women of Salerno) played by the aforementioned Walton and Joseph Lattanzi respectively. Their playful side conversations with each other were hilarious and added tremendously to the many comedic elements present in the opera. Often times, Don Ramiro had to remind his overzealous servant to tone it down in order to make sure that their ruse wasn’t uncovered.

No role went unappreciated, whether it was the crew of squires singing and dancing with Cenerentola’s intoxicated stepfather, or the prince’s wise guide as the fourth-wall-breaking narrator.

The small differences did not take away from the opera — rather, they added to it and helped give the opera a fresh feeling, distinct from the old “Cinderella” you all know and love.