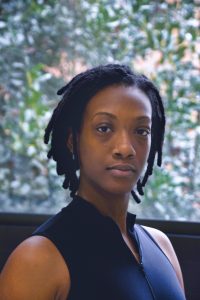 As a dance major, what is your day like?

I obviously dance all day. But with that, I am taking two technique classes a day. And then I take improv classes, choreography classes. As time goes on, we have dance history. And [my] senior synthesis, that’s when you have the time to really think about your future, your career — where you wanna go, how to budget things and different companies you’re looking at. And I am also rehearsing and doing student choreography pieces.

How do you come up with student choreography pieces?

Personally, I always have an idea in mind. Whether it’ll be an emotion I’m feeling deeply at the moment, or something that stuck out to me at any point in time. Or it could be I’m not feeling anything but I do want to move and I do want to create.

What do you see yourself doing with a BFA in dance?

With my BFA, I would love to be in a company for a little bit because my heart really lies in choreographing. And I would love to have my own company and really make a space for dancers that look like me — a true space. I would like for them to be young adults up until however old I feel like going. There’s no age when you can stop dancing because it’s all up to you. I want to start there and as time goes on, I want to open it up and go to a younger demographic. And maybe open up a second company or a youth ensemble for them

What kind of dancing do you have in mind to teach?

I would love to teach the classes that I took growing up. So that includes ballet, tap, jazz, African, hip-hop, some pointe classes in there … And I also want to bring in some flamenco, it seems pretty cool. I think that’s it but I am not closing off anything else. I’m very open to other classes that may pop up or other styles of dance that I may encounter in my future to incorporate that into my center.

Did you always want to be a dance major?

I knew I always wanted something in the arts. I didn’t really take dance seriously until I was 9. And it sounds weird when I say it because usually some people are like, “I didn’t take dance seriously until I was like 13.” But I knew at a very young age that dancing was what I wanted to do. This was where my heart was. I didn’t know in what area of dance I wanted to be in. But I knew I wanted to dance, I knew I wanted to move. I knew that sitting at a desk, typing on a computer wasn’t my thing.

What advice do you have for dance majors/minors or those who want to dance for fun?

My advice is to just do it. The dance world can be really brutal at times and can discredit you. Or make you uncomfortable just for even trying to be yourself because you don’t look like a certain person or a certain dancer. You don’t fit the stereotype. So everything along those physical attributes don’t matter. Just be yourself and continue having that passion. Because there will be times where you feel burnt out but you always have to remind yourself [of] your own reason for doing it. And I can’t answer that for everybody, you have to take the time out to really look at yourself and ask your own self: ‘What am I doing this for? Why am I doing this? Am I doing this for fun or am I doing this because this makes me feel a certain way? And what does it make me feel?’ So, I think everybody should stay true to that and don’t pay attention to what people have to say, unless it’s in a technique class, that’s the only way. But other than that, it doesn’t matter. 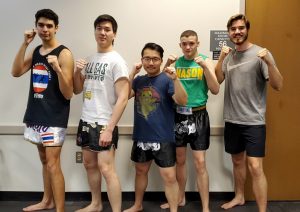 How did you get started with the Muay Thai Club?

It was about a year ago now, I had been doing martial arts all my life and I took the MMA class at the RAC. After class, I was talking with one of the other students, Justin Yang, and we realized we both did muay thai. He was like, ‘We should start our own club,’ and I thought it was a great idea. That’s how the idea got started. We found some other people from the MMA class who were interested, Khoa Pham and Dev Ghosh, and we branched off from there. I think our membership was about 60 or 70 members at the end of last year, so it’s a fast-growing club.

What makes muay thai special or different from other forms of martial arts?

We call it ‘the art of eight limbs.’ We use two fists, two elbows, two knees and two feet. It’s almost like kickboxing but the Thai kick is definitely different from any other martial arts. It takes people a while to learn because it uses the shin area and you use kind of an ax motion. Elbows and knees aren’t something that many other forms of martial arts use, it’s pretty unique to muay thai.

Do a lot of the new members have experience with martial arts?

It’s varied, we get some people that have done taekwondo, jiu-jitsu, boxing and some have done muay thai, but the majority of our members have never done martial arts, never even thrown a punch. We accept everyone, we want you to come join and you don’t need experience, it’s not a requirement. We’re going to teach you how to do muay thai from scratch. The stance, throwing a jab, cross, hook; all of that we teach.

It’s a free club, we don’t charge dues, and we’re completely open. No discrimination is allowed. We accept any Mason student. If you want to learn martial arts, get in shape or learn muay thai, we accept everybody. There’s no judgment.

Do you get to see a lot of improvement in new members?

We have some members that have been with us from the very beginning, and you can definitely tell that they’ve made a lot of improvement; they have good technique and good form. It makes me really happy to see students that start out not knowing anything and now they can throw punches and kicks correctly. I can see what they’ve learned.

How do you get to incorporate the culture behind muay thai?

We try to incorporate a few Thai words. I have everyone line up shoulder to shoulder and we give them a phrase in Thai to learn that translates into “greetings” or “hello”. Sometimes we try to say something about the culture. When I was learning muay thai I learned a lot about the culture of Thailand and of muay thai, how it’s evolved throughout history.