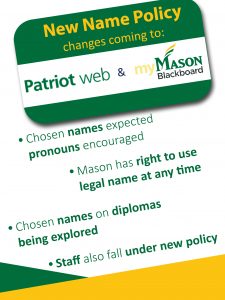 When Jax Ohashi came to Mason last semester to pursue an MFA for Speculative Design, he went to the Card Office to get an ID. While there, Ohashi was asked if his name was spelled correctly on the ID. He looked down and saw it was his birth name printed — not his chosen one.

When asked if his chosen name was a nickname, Ohashi answered affirmatively, not wanting to out himself as trans. He was told that they could only put the name he was registered under on the ID and was directed to the registrar’s office, where he was then sent to fill out the Student Preferred First Name Authorization Form, which only changed his name on Blackboard.

At the end of last semester, the Chosen Name and Pronouns Policy was updated online. Banner 9, a software update to the system behind Patriot Web, will give users the opportunity to designate the name and pronouns they use. Blackboard is at the forefront of the policy change, as well as other systems that students use often like Mason360, Student Health, Counseling and Psychological Services and the Office of Disability Services.

“It’s not just for one community that needs this access, it’s for a large number of people who want to be able to use a name that better reflects who they are as people, rather than kind of what is on legal documentation,” Associate Director of LGBTQ+ Resources Josh Kinchen said.

Transgender, non-binary and gender non-conforming students believe that the new policy is a step in the right direction.

“I hope that it makes me get deadnamed in class less,” junior Integrative Studies major Cassidy Pollard wrote about the policy’s impact. “That’s definitely a big thing, but on a larger scale, I hope it generally makes it easier for trans and gender non-conforming students to have university systems and class rosters display their real names.”

Currently, students cannot change the name on their student IDs. At this time, they are treated as legal identification, so student’s legal names are put on the IDs, even if, like Ohashi, they have not gone by it for many years.

“It’s just uncomfortable because you’re hiding your ID,” freshman Music Technology major Travis Braunfeld said. He had his name changed on both his email and Blackboard accounts, but when trying to do the same for his ID, was told he couldn’t change it. “I am a music student. And I have to swipe into practice rooms, and I’m with people all the time. And it’s like, ‘Don’t look at my name on my ID,’ which is just weird.”

“I’ve written a lot of emails explaining stuff, and it’s nice but it never does the job because it makes you feel like you did something wrong,” junior Theater major Jacob Horowitz said. “I messed up because I’m changing my name, I messed up by wanting to be called ‘he/him’ or ‘they/them’ or ‘she/her.'”

Braunfeld emails his professors before the semester begins to make sure they know his correct name and pronouns. This semester, he has had issues with them getting back to him. It’s led to situations where he has to tell professors that don’t completely understand his name and pronouns after class.

Braunfeld is also concerned about the timeline of the policy.

“I reached out right after enrolling at Mason over the summer in regards to this whole situation and kind of went in circles with people,” said Braunfeld. “I emailed back and forth with several different administrators trying to figure out what I could do and have each time gotten a little bit of, ‘Oh, this is good. We’re moving towards something,’ but nothing has changed since then. So, the fact that it’s another semester and they’re just still saying it is a little bit concerning.”