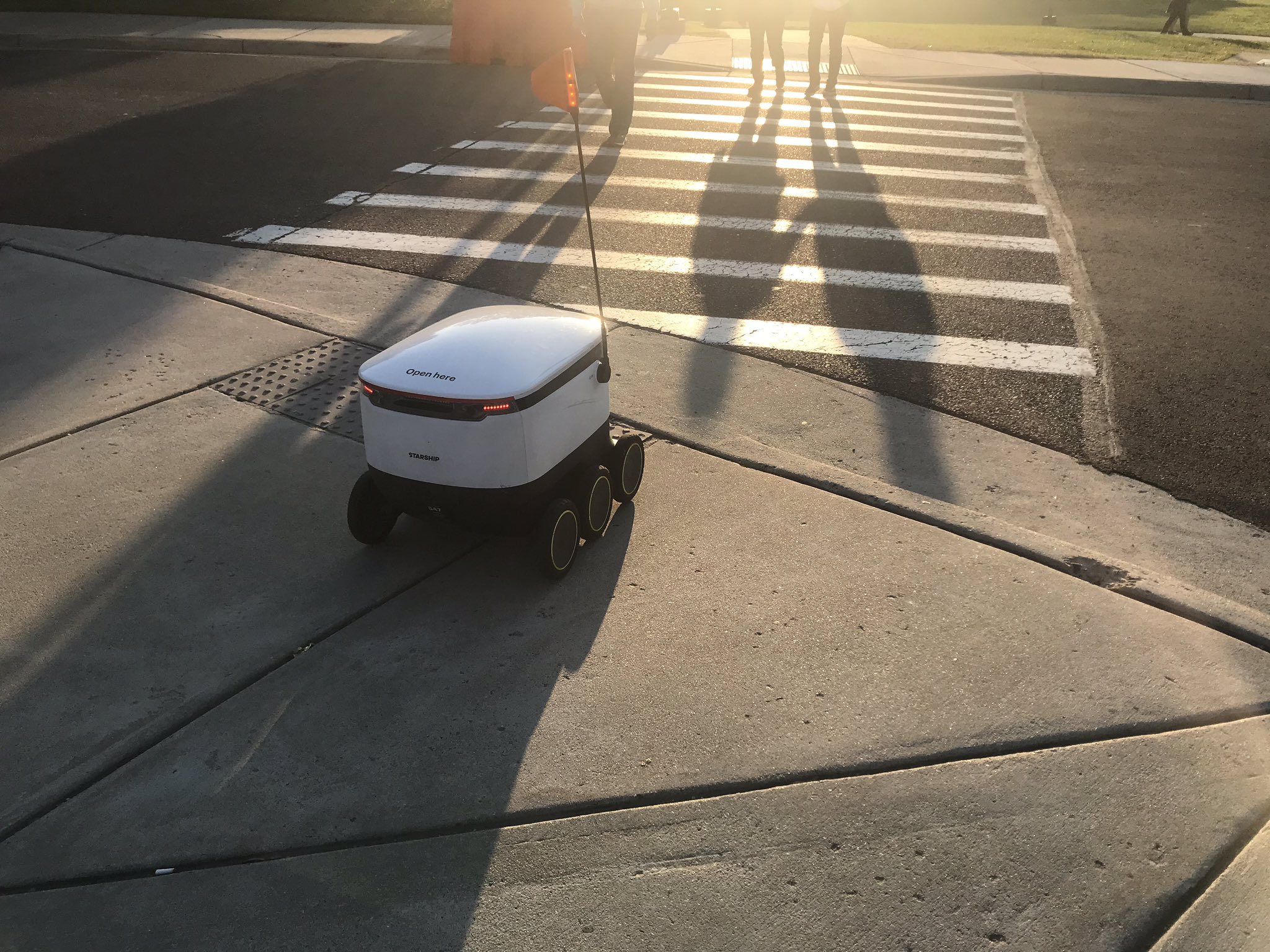 The concern that electrical and computer engineering Ph.D. student Brian Jarvis holds about Starship robots on campus is simple.

Jarvis is physically disabled and uses a power wheelchair to get around. If he is on campus and one of the robots stops in his path, Jarvis feels he could become stuck with no easy way to navigate around it.

“It’s a hypothetical problem still,” Jarvis said. “But I mean, I kinda have thought about, ‘Well, if I had to, would I just ram this thing off the road and tip it over?'”

Since their release last school year, many members of the Mason community have expressed fascination with the robots.

However, some students are concerned that the food delivery service may also pose a threat to accessibility on Mason’s campus.

The robots can block the curb cuts that allow disabled students to go from road to sidewalk, as well as to the sidewalk itself. One student, Mary Ellen Buckner, has seen this occur before several times in the past few weeks.

Buckner has taken multiple photos of robots waiting in curb cuts to cross the street at the intersection near the Northern Neck Starbucks.

“I’ve seen [the robots] a few times waiting to cross the street,” Buckner, who is able-bodied but wants to amplify disabled student’s concerns about the robots, said. “And they just don’t seem to be able to tell that they can cross the street.”

Last month, the University of Pittsburgh paused robot testing on campus after a student posted a thread on Twitter that went viral stating that she was “trapped” by a robot. It was later reported by The Pitt News, University of Pittsburgh’s student newspaper, that the student was able to travel past the robot with some difficulty. After the original reply, Starship changed its statement to exclude an apology.

Mason’s robots have been on campus since January, when Starship and Sodexo partnered to bring them to the university. Starship Technologies is directly in charge of the robots and all programming decisions related to them.

Since the launch, the Starship-Sodexo partnership has expanded to other schools. In March, Northern Arizona University began to roll out Starship robots.

Other members of the Mason community who are disabled believe that the Starship robots can increase accessibility on campus.

Kristine Neuber is the IT accessibility coordinator in Mason’s Assistive Technology Initiative. She is in charge of making sure that technology on campus is accessible for students and faculty with disabilities, and personally uses a service dog for issues related to balance.

Neuber has worked with Starship to make sure the company’s equipment is accessible for disabled students. She enjoys the responsiveness of Starship on issues such as the accessibility of their app. Since coming to Mason, the company has made changes to how the app is used, including additions that have helped users with vision impairments navigate the program.

“It’s definitely a moving target, accessibility in the electronic arena,” Neuber said. “But the fact that they’re willing to — they’re asking for feedback and actually making changes because of that is a big plus.”

Neuber also believes that the robots add accessibility to the Mason campus. “Thinking about the amount of time it would take you to go over to the Johnson Center, stand in line, order your food, get that back, eat it and get to class — it can be a significant amount of time if you use a wheelchair, if you have another mobility issue or if you’re visually impaired,” she said.

When reached for comment, a Starship spokesperson wrote, “Anytime a new technology is introduced, whether that is an automobile, airplane or robot, there is going to be a period of heightened interest. That is what is happening with delivery robots. We want our robots to be courteous and convenient for everyone.”

The spokesperson also said that Starship will continue to improve its technology to “make life a little bit easier” for those that use the robots.

As for Jarvis, his opinions about the robots are mixed.

“I think that they are a cool technology,” Jarvis said. “I see the merits of what they’re doing, you know. I’m all for that kind of innovation and experimenting with new things. I think it’s sometimes companies rush to just get out there without thinking through the ramifications for the entire population, though, and it’s just a case of that.”

He continued, “So, I’m not opposed to them being on campus, I think they just need better rules in place — and I say rules, I mean programming rules, so the robot knows how to better share the road.”