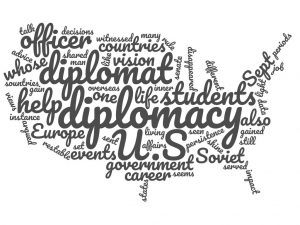 A firsthand look at the life of a foreign service officer

In an effort to help students broaden their views and gain insight into different work fields, Mason hosted Government Week from Sept. 16–20. The week included resume workshops, networking events and lectures held by distinguished government employees. One of these events included Insights into Diplomacy, a talk by former service officer Carol Stricker held on Tuesday, Sept. 17, in the Johnson Center.

Stricker, a lifelong diplomat whose job focused on diplomatic security, provided students with valuable insight and advice on the inner workings of the State Department and what life is like as a foreign service officer.

The stated vision of the U.S. State Department is the promotion and demonstration of “a free, peaceful and prosperous world.” The State Department works towards this vision by collecting accurate and relevant information on the current state of affairs in countries all over the world. They also analyze this data in order to allow the U.S. government to make informed policy decisions.

At a time when diplomacy seems to be taking a backseat, Stricker argued that it could not be more important. She provided many examples of how diplomacy has served both the U.S. and the international community at large.The aid package sent to Europe to alleviate the destruction of World War II, the Marshall Plan, is a key instance of how diplomacy worked to restable much of Western Europe after one of the most destructive periods of history.

Stricker also shared with students a story she witnessed while serving overseas in Georgia.

In 2003, a local employee whose father had disappeared under Soviet rule volunteered to go to Baghdad and help set up the U.S. embassy there. He did this because he had personally seen the impact U.S. diplomacy had on Soviet states, and wanted to help other countries who had still not gained their freedom. For the man, U.S. diplomacy helped shine a light on the oppression they were living under.

Stricker admitted that the life of a foreign service officer is a challenging one. Anyone wishing to be a career diplomat needs to go on everyday with “passion, persistence [and] knowledge.” She stressed how rewarding the career has been for her.