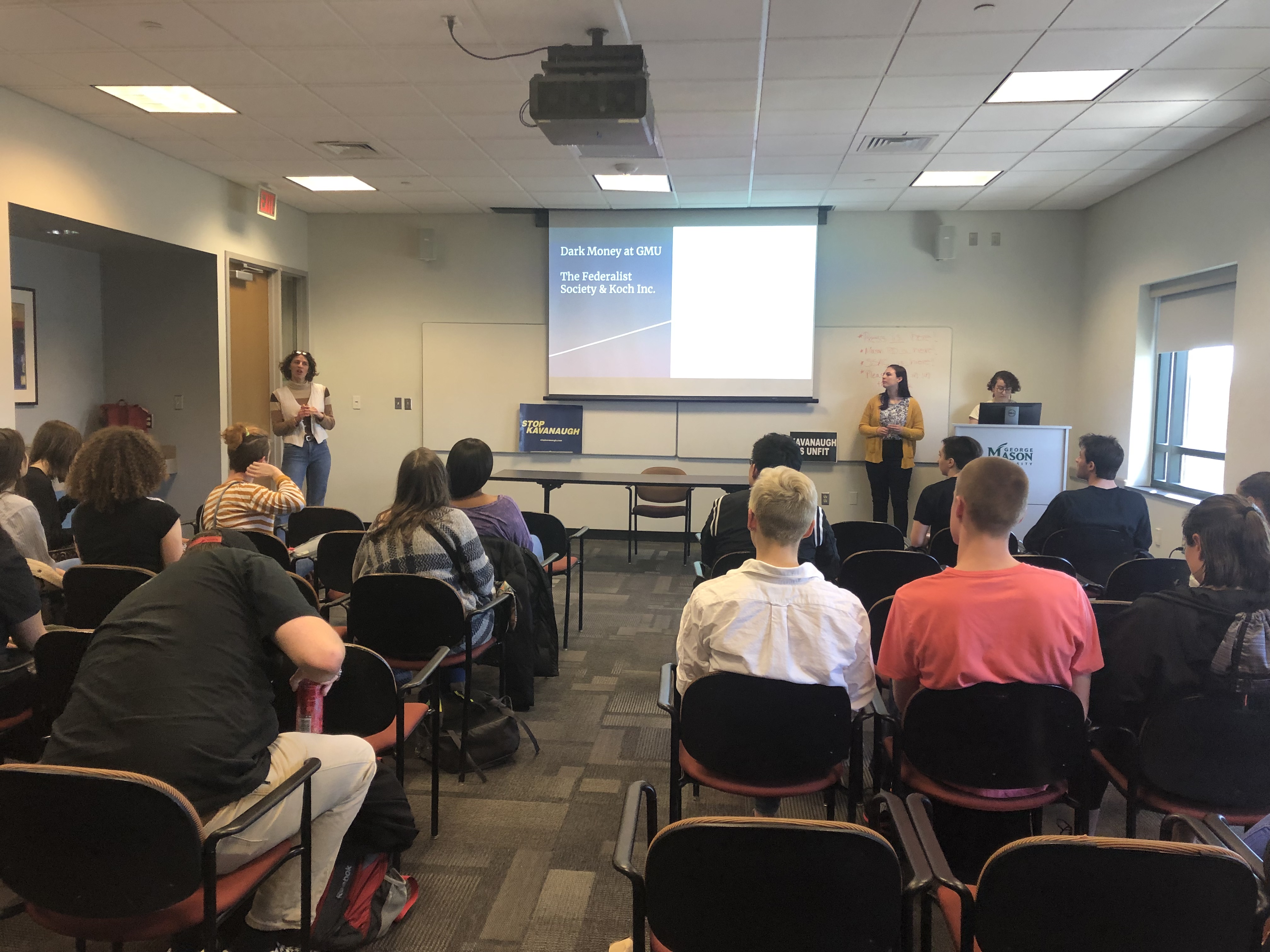 Though some defended the decision to hire Kavanaugh, many students felt as if the choice, which comes in the midst of Title IX complaints on campus, was inappropriate. Students took to Facebook and Twitter to express their anger and disappointment with Kavanaugh’s hire.

Students around Mason gathered on Saturday, March 23, to offer support to survivors of sexual assault. The gathering led to the creation of Mason for Survivors.

In a tweet, Mason for Survivors (@Mason4Survivors) explained its purpose, saying, “Mason For Survivors is a student advocacy organization dedicated to cultivating a safe space for survivors of sexual violence through the reform of Title IX, dialogue on the systemic corporate influence in higher education, and the disaffiliation of Mason from Brett Kavanaugh.”

The group hosted a teach-in Thursday, March 28, where students addressed concerns over Kavanaugh’s hire and Title IX resources, and trained for a direct-action response.

Students from different programs and majors came out to the teach-in, expressing their concerns with Mason’s decision to hire Kavanaugh and their own decision to join Mason for Survivors.

One Mason student, Michaela Pereira, described her reason for joining. “I’m here because I feel really strongly about this … [sexual assault] often feels inescapable, and it shouldn’t be.”

During the meeting, the organization emphasized how important it is to lift up survivors in all the work they plan to do in the future. “No one else should be the lead voice on sexual assault or harassment other than survivors,” said Gabriella Hutchinson, Mason for Survivors’ direct-action co-lead.

Members of Mason for Survivors discussed their petition―which issued a list of demands toward Mason President Ángel Cabrera―at the teach-in. Demands include that Kavanaugh be fired, a better amount of resources on campus for survivors, free access to rape kits and the option for a student to relocate if they report an incident of sexual misconduct in their residence hall. The petition has over 1,500 signatures.

On-campus resources that the group calls for include additions to the staff in Mason’s Title IX office and changes to the police department, such as a 24/7 Mason PD sexual-assault response coordinator and trauma-informed training for the department.

“‘Trauma-informed’ is basically exactly what it sounds like,” student leader Sara Deriso explained. “So when police are working with survivors, they know how to talk to them and interact with them without re-traumatizing them. That is imperative to the rightful pursuit of justice to these survivors and their cases.”

The student senate passed a resolution Thursday to “Support a Better, Safer Mason” as Mason for Survivors filled the student senate meeting. The resolution aligned with the mandates of Mason for Survivors, which made it known that the teach-in would not be the only event to take place in the wake of Kavanaugh’s hire. The group plans to speak at the upcoming faculty senate meeting set for Wednesday, April 3.

Gaspari continued, “It’s really damning that this happened … and that it was broken by a student paper and not announced to us.”

Other student groups on campus, such as Transparent GMU and the George Mason Democrats, also denounced Kavanaugh’s hiring.

The Antonin Scalia Law School released a statement defending its decision to hire Justice Kavanaugh as a visiting professor: “It is a rare opportunity for students to learn from a U.S. Supreme Court Justice and we believe that contributes to making our law program uniquely valuable for our students.” Senior Associate Dean Allison Price said in an email that the statement reflects the views of herself and of Dean Henry N. Butler.

Cabrera reiterated the decision of the law school in his own statement, explaining that Kavanaugh’s hire does not dilute the university’s commitment to removing sexual assault from Mason’s campus.

“This decision, controversial as it may be, in no way affects the university’s ongoing efforts to eradicate sexual violence from our campuses,” Cabrera said. “We remain firmly committed to this goal, and I want to encourage students who feel strongly about sexual assault prevention at Mason to continue to raise their voices and help us move forward.”