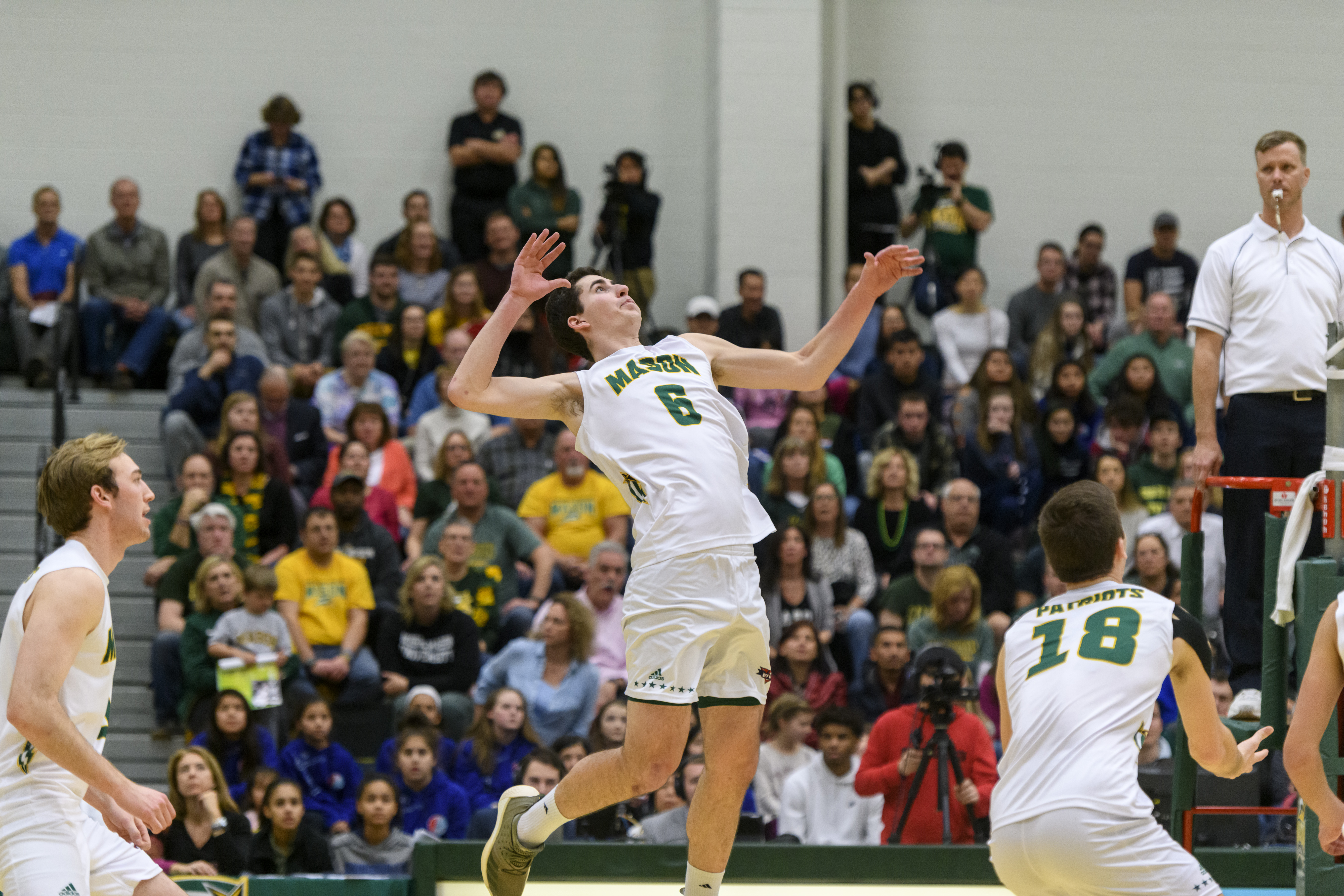 Men’s Volleyball’s Sam Greenslade has embraced his role on the team in his breakout season and aims to make every play in every game count. With his teammates’ heads held high, the junior is now hoping that a long championship run is on the horizon.

“We had a strong team last season,” Greenslade said in reference to last year’s strong season and performance in the EIVA Tournament. “Obviously we didn’t get as far as we had wanted, but it’s about what we’ve built.”

After four years of volleyball success at Penn Manor High School, splitting his time and athleticism between volleyball and basketball, Greenslade decided he knew what his true passion was. With three years of college volleyball at his back, he still speaks of the sport as impassioned as ever, demonstrating both his knowledge of the game and understanding of how to succeed as part of a team.

As a freshman, Greenslade was active, playing in 24 matches with 14 starts for a total of 70 sets. He accumulated 126 kills (1.80 per set) on a 0.237 attack percentage with four double-digit performances.

Greenslade also had 19 service aces (0.27 per set) in his first season, the third-best mark on the team with eight assists. Greenslade notched 64 digs, the fourth-most with 0.91 digs per set, and 28 blocks (four solo, 24 assists; 0.40 per set) on the defensive end.

As a sophomore, the outside hitter had several achievements, including an ace against Princeton on Feb. 17 and again against Penn State on April 7. Greenslade had a career afternoon against Harvard on April 14, where he registered 21 kills and four aces for 25 total points.

Four aces in a set marked a record of the highest amount by a Patriot in 2018, which earned him a VolleyMob Player of the Week Honorable Mention. Greenslade’s sophomore year as an up-and-coming star helped set expectations regarding team success. He filled out the team’s outside hitters, which significantly helped its attack.

Greenslade has littered his statistics books with career highs, including five aces against McKendree University on March 3, 2017. He set a career-high in blocks, with four against Coker College the following night. He rounded out his freshman season with a total of 161 points, 2.3 points per set.

The Millersville, Pennsylvania, native was fourth on the team in total kills and kills per set last season. Also, his .458 hit percentage against Sacred Heart on April 1 was the third-highest individual performance of the season among outside hitters.

He hit the mark again this season against Charleston before beating out his best with a .500 against Sacred Heart on March 1. The key, as Greenslade divulged, is in succeeding together. Everyone must buy into the system to succeed, from Greenslade to his teammates and his coach.

For Greenslade, this understanding of the path to success rings true, as it has been the path to success for him in the past. Sam’s parents, Gary and Joan, tried to raise their three kids with a strong emphasis on both hard work and teamwork. Sam grew up with an older sister and brother, and smiled as he retold his mother’s story of his brother Andrew, the eldest, handing him a basketball and encouraging him to play.

His brother would go on to complete as a decathlete at Slippery Rock, while his sister, Jessie, would go on to great success as a Mason Women’s Volleyball student-athlete. Jessie graduated the year before Sam’s first year on the volleyball team, but her track record and experiences with Mason solidified Sam’s desire to come to Mason for school and athletics.

Greenslade has played every game this season, making him an indispensable component of their success. So far, he’s accumulated 158 kills on a 0.287 attack percentage, with seven double-digit performances in 19 games. With six games left in this season, he has notched over 37 total blocks, 32 block assists, 92 digs, 10 assists and 203 points.

When asked what he would like to improve in his game, Greenslade reflected for a moment and then described how the number-one thing he would look to improve would be consistency. He said, “The better I perform, the better the team performs as a whole.” 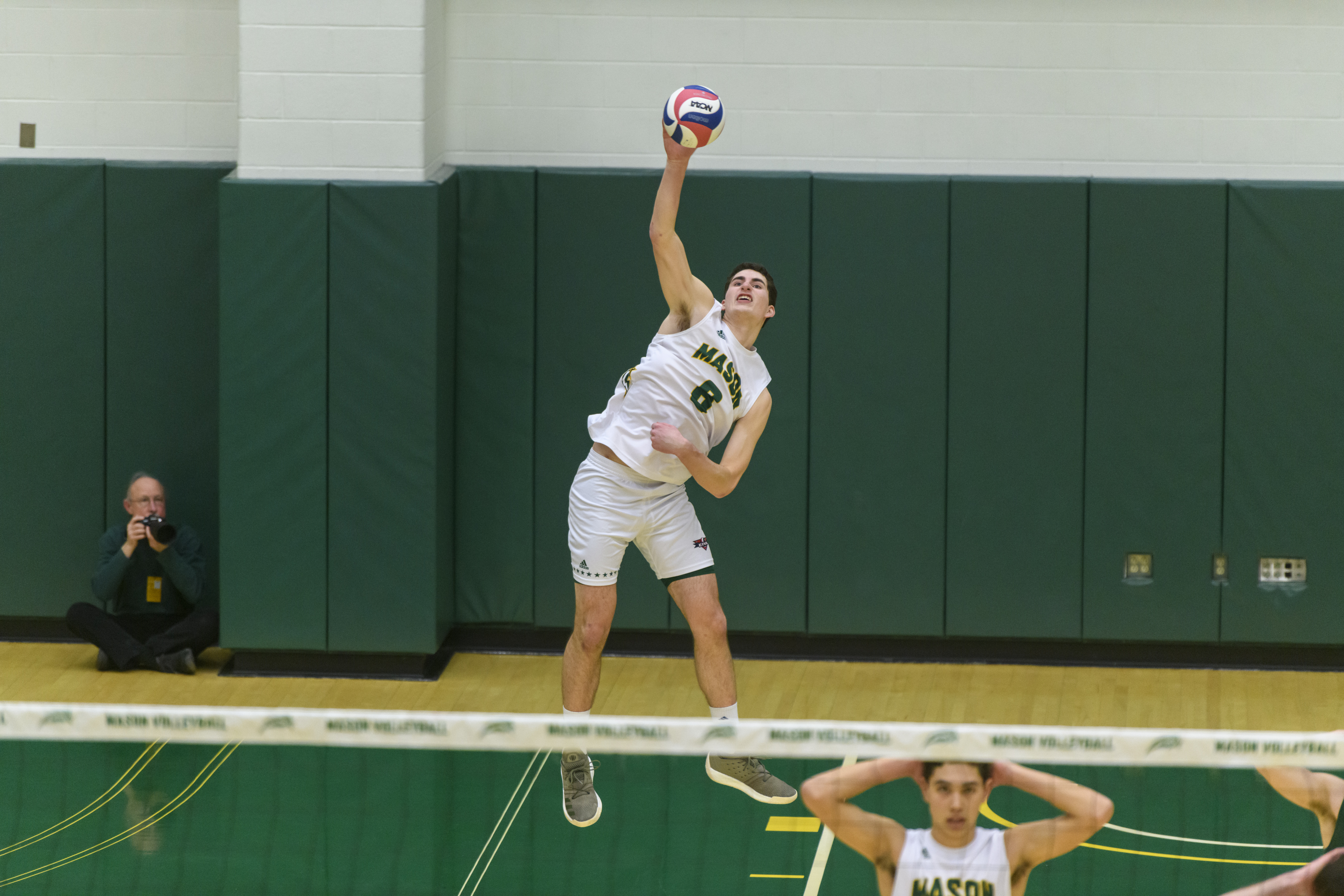 This, he says, contributes to how well the team plays overall. That way, Greenslade jokingly says, he and his team can focus on “big-boy volleyball,” or getting the key plays in the moment they are needed for the win.

Over a spring break trip Greenslade is unlikely to forget, he recalls head coach Jay Hosack opening up his family’s home to the team where everyone relaxed, swam and enjoyed each other’s company.

Greenslade excitedly described Hosack as “super passionate,” continuing, “You’ll see other coaches are more quiet. … [Our] coach is never quiet when we are on and making big plays. Everyone who goes to our games sees that.”

This enthusiasm and passion for the game that Hosack instills in his players bleeds through the players into the game. Greenslade says he lives for the moments of pressure when your family and friends are yelling and the excitement level is high.

With an overall record of 13-6, the team is now anxiously looking to bring the Patriots back to the NCAA tournament for a second time during coach Hosack’s four-year tenure at Mason.

Unsurprisingly, Greenslade, a mathematics major, has been calculating his chances at success in the big leagues and has been looking into the possibility of playing professionally, although he lamented that that would take him oversees away from his family.

Having coached volleyball in summer camp for years at Spooky Nook near his home in Pennsylvania, Greenslade looks fondly toward the future with hopes of continuing to play, with him eventually growing into a coaching career.

View all posts by Erik Sather →