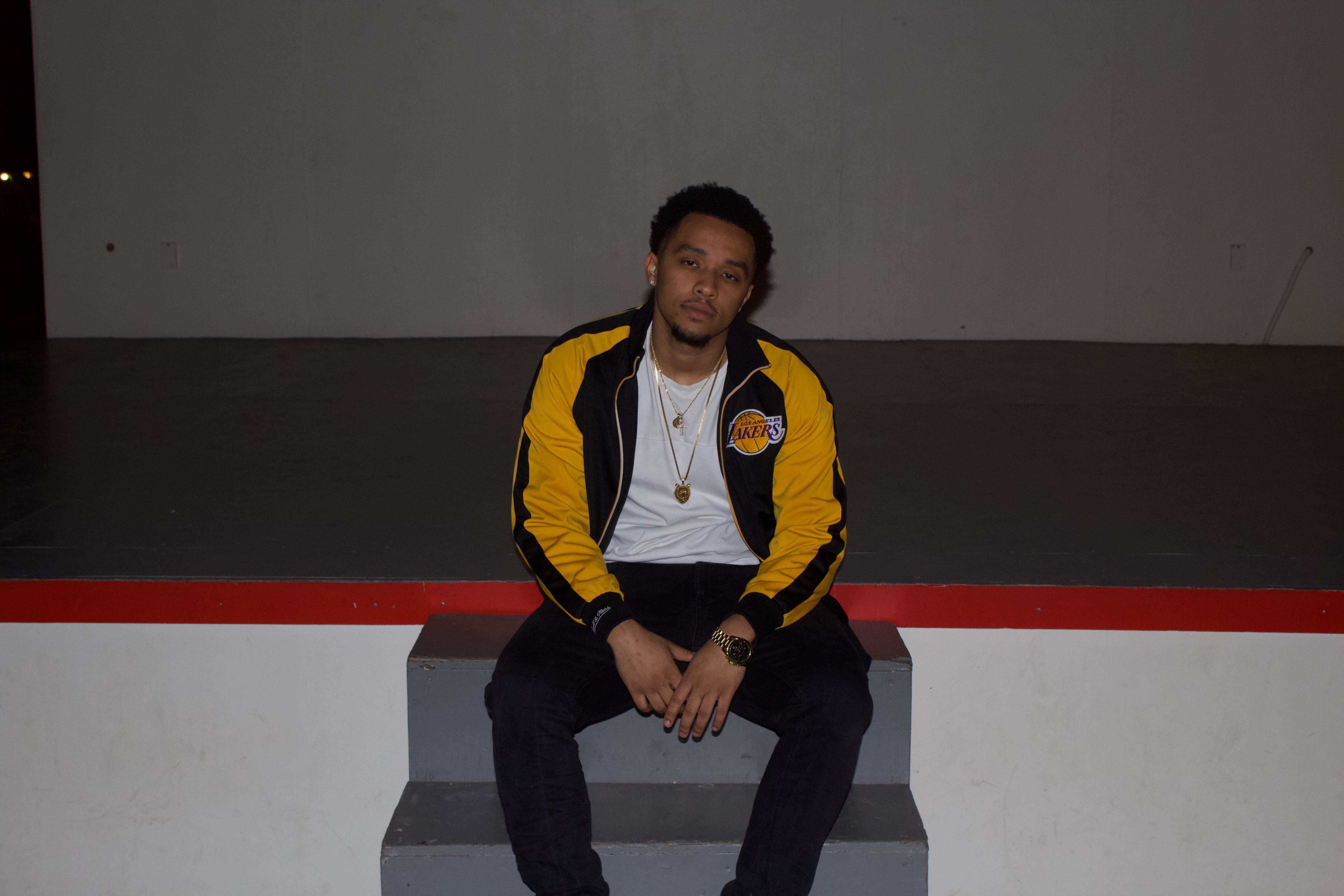 I am an integrative studies major with a concentration in legal studies. I like history, so I’m getting a minor in that too.

AS AN ARTIST, WHAT INSPIRED YOU TO JOIN THE MUSIC INDUSTRY?

I’ve always loved music. It’s been a part of my life since I was a kid, but I honestly didn’t [start] making music until my friend said [that] he was making a mixtape and I hopped on the track. From there, my love and passion drove me to do more.

HOW WOULD YOU DESCRIBE YOUR STYLE OF MUSIC?

Kanye has good music … well, I make great music [too]. But seriously, I would say that I make chill hip-hop. Ranging from a slight turn-up [to the music that] might get you in your feelings a little. Just a wide range of hip-hop variety.

WHICH ARTISTS IN THE INDUSTRY DO YOU IDOLIZE AND WHY?

I don’t like the word ‘idolize’ because you have to remember [that there] are other artists that are just regular people at the end of the day. That being said, I have a lot of respect for Drake and Kanye. Those are definitely my two favorite artists. The type of craftsmanship behind their work is just something to respect, and I love their sound. Definitely would love a track in the future with them.

WHAT ADVICE DO YOU HAVE FOR SOMEONE WHO WANTS TO PURSUE A CAREER IN MUSIC?

Hard work pays off, but it is hard work. If you love it, [then] it’s worth it.

DO YOU HAVE ANY UPCOMING PROJECTS THAT MASON STUDENTS CAN LOOK OUT FOR?

I have two singles [that] I’m dropping soon. An exact release date is not set yet, but expect the [singles] to drop before spring break.

WHAT IS YOUR FAVORITE SONG THAT YOU’VE RELEASED?

Hmm, that’s tough! I definitely like the rawness of ‘She Know.’ ‘Said It Right’ and ‘Doped Up’ were tough singles. ‘Heartbreaks’ is probably my favorite track out now, but [the] new singles [that] I have coming out might be my favorite.

WHAT IS YOUR FAVORITE PART ABOUT BEING AN ARTIST?

It’s just been a great outlet to express myself. It’s also been a great motivator in pushing me to explore new things and do things I wouldn’t normally do.

WHAT MAKES YOUR SOUND UNIQUE?

It’s like I have the Krabby Patty Secret Formula, the secret sauce that can’t be replicated. 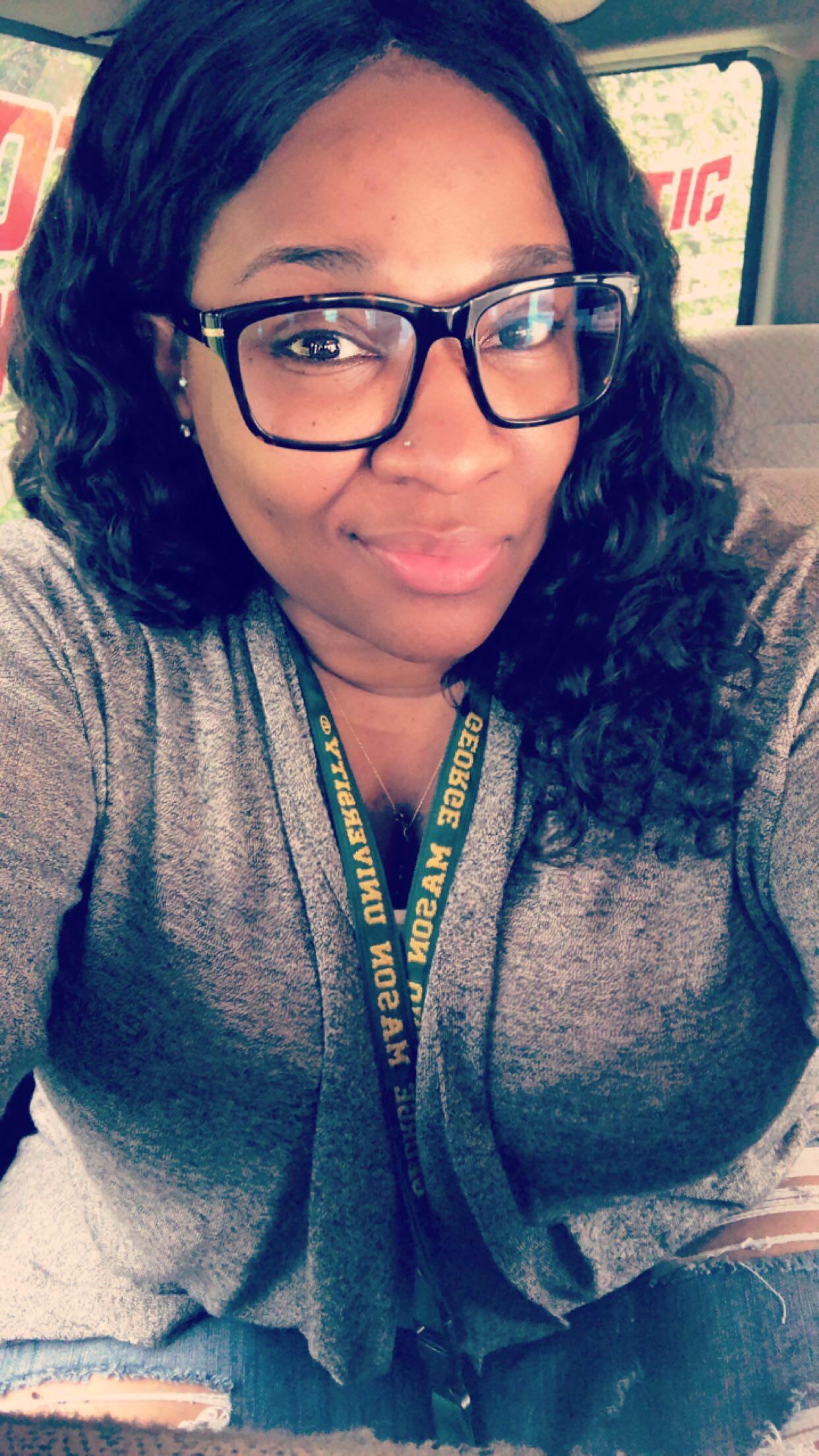 WERE YOU ALWAYS INTERESTED IN HAVING A CAREER WITH THE FEDERAL GOVERNMENT?

WHAT CLASS DID YOU TEACH ON CAMPUS? WHAT MOTIVATED YOU TO TEACH THIS CLASS?

As a peer advisor, I co-taught a UNIV 100 course with a faculty member my sophomore through senior year. I started school extremely introverted and vowed not to let that hinder my college experience. So I immersed myself in extracurricular activities that pushed me to be more social as well as help with my fear of public speaking. Some of my best friendships during college were formed out of the UNIV 100 course I took as a freshman. I wanted to continue being involved with a program in hopes of fostering that for other incoming freshman students.

I HEARD THAT YOU LOVE TO TRAVEL. WHAT HAS BEEN YOUR FAVORITE PLACE TO TRAVEL SO FAR?

I loved the experience [of] living in Germany. My family did not initially live on the military base and instead lived in a German neighborhood. I was fully immersed in their culture where no [one] spoke English and that, in turn, created an opportunity and interest in learning [the] language. Trips to many neighboring countries ignited the “sponge’ in me to learn, see and eat … all that was offered … Don’t get me wrong though, I love a good tropical place and the beach too. I’m quick to go on a cruise to Florida where I have family or out to sunny California where I’ve also lived before, and [I] love to vacation.

WHAT ARE YOUR BEST MEMORIES FROM MASON?

Some of my best memories at Mason include being a member of GMU’s Program Board, being a Resident Advisor and the randomness of hanging out in the JC. Planning events like Mason Day and spending the day outside on the quad, enjoying Homecoming week and doing everything in [the] JC, from grabbing a bite to eat with my roommate or friends, studying, working and more, created memories for a lifetime.

WHAT IS CONSIDERED TO BE YOUR BIGGEST ACHIEVEMENT?

Purchasing my first home. We all know the DC area isn’t a cheap area to live in. I was 28 and about to make the biggest purchase of my life by myself. It was scary, but my goal was to do it by the time I was 28 and I did just that. 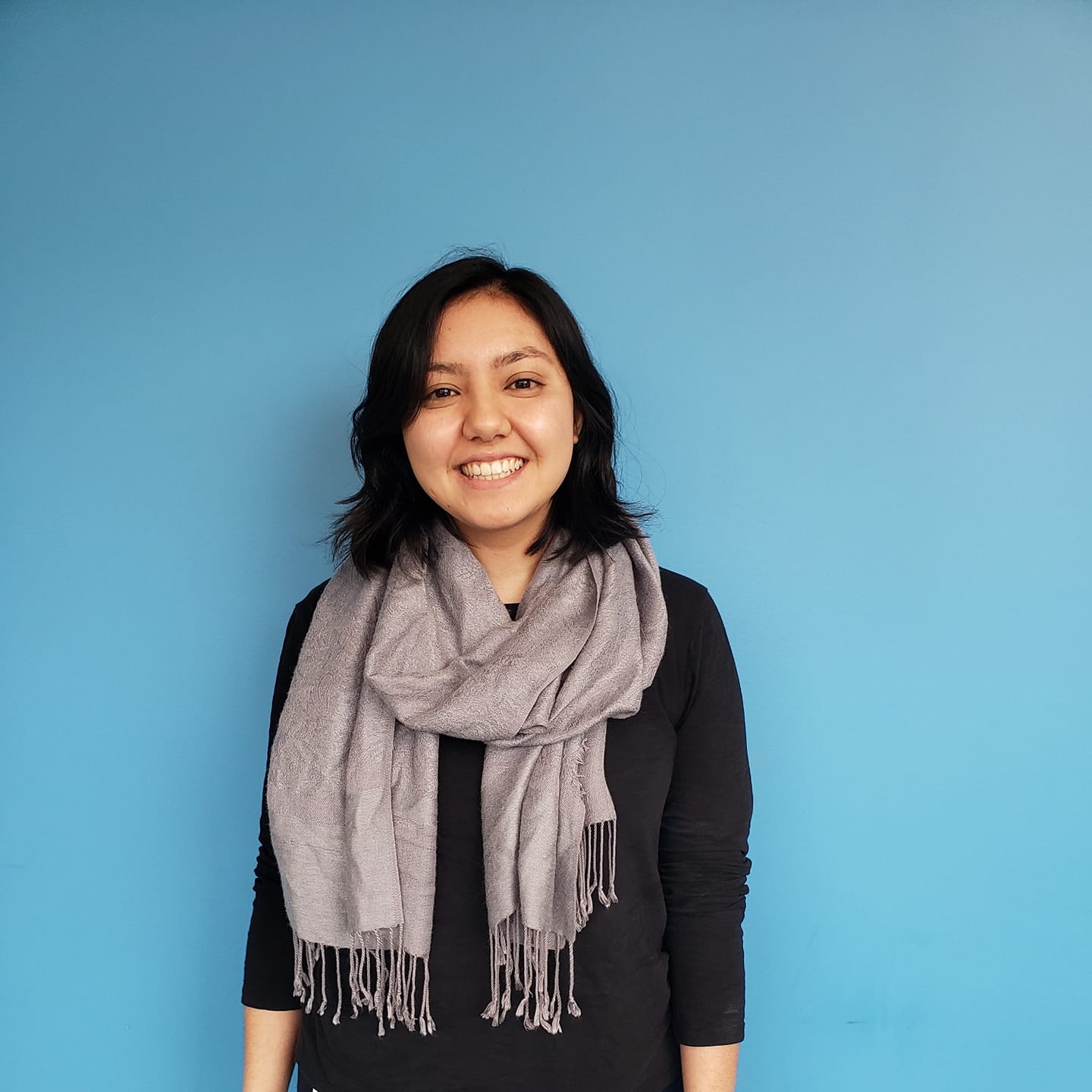 WHAT DO YOU DO AT NPR AS THEIR SOCIAL AND PARTNERSHIPS INTERN?

It’s called the Social and Partnerships internship for NPR music, and pretty much what I do is two-part. The first part is the social media aspect, where I schedule social media posts for the Instagram, Twitter, Facebook and also the YouTube [channel].

The other half is the Partnerships part, which is managing constant communication with member stations because—so NPR music is the headquarters, but we are in contact with all the music member stations around the country like KCRW or KEXP or WGBH, there’s a lot of thing (sic) with that. We like to bring light to the different music tastes from each different music station, like what they have to offer. Something that we did recently was we did a new initiative or mixtape called Station Breaks, which is a monthly playlist put together by member stations, and it’s just a pick of an emerging artist that they think is really cool.

WHAT WOULD YOU SAY YOU LEARNED IN YOUR PROFESSIONAL CAREER SO FAR SINCE GRADUATING?

My main takeaway is to never lose sight of what you’re passionate about, and also being patient is really important too. For me, right out of college, I didn’t take a music/radio position. I worked at a homeowners association (HOA) doing communication work there. But at the same time, I also volunteered at a radio station. I volunteered at WAMU in my free time because I just really enjoy the operation of radio and music as well, and I took a risk. I [also] took a risk and applied for the NPR music internship not thinking too much of it, and it led me to this point. I’m truly grateful for the opportunity. Being patient and never losing sight of your passion.

A lot of it is connected to what Roger [Smith at WGMU] told me when I was in college. He always told me, ‘Do what you love, the money will follow’ [laughs]. It’s so true. I’ll never forget that about Roger. It just stayed with me.

WHAT’S YOUR FAVORITE THING ABOUT WORKING IN RADIO?

I do like keeping in the know in terms of music. Seeing everything coming to life, whether it’s about music or any other topic. It’s really cool to see the process of how everything comes to life and takes form. A lot of it does require research. But once you put that research into a product, I think it’s really valuable … My first byline was about Jorja Smith with Maverick Sabre. They made this song called ‘Slow Down’. So just pitching that, being able to write about it and then seeing it and having it published, it’s like a brain child. I think it’s really cool, having that creative outlet in a sense … I’ve sat in on a couple tapes of a couple shows. Seeing the live-air stuff is pretty dope.

WHAT’S A FAVORITE STORY OF YOURS THAT YOU’VE COVERED OR SOMETHING YOU’VE WORKED ON?

I haven’t worked on too many stories, but my favorite story was when we did a piece about the songwriting behind Ariana Grande’s new album ‘Thank U, Next.’ I was able to interview Tommy Brown who wrote ‘Thank U, Next,” the song, along with “7 Rings” and “Needy.” He’s been with Ariana for such a long time, like worked with her, and it was really cool to handle the bookings and interview process of that along with writing the interview questions and conversing with the music editor. It was really cool. 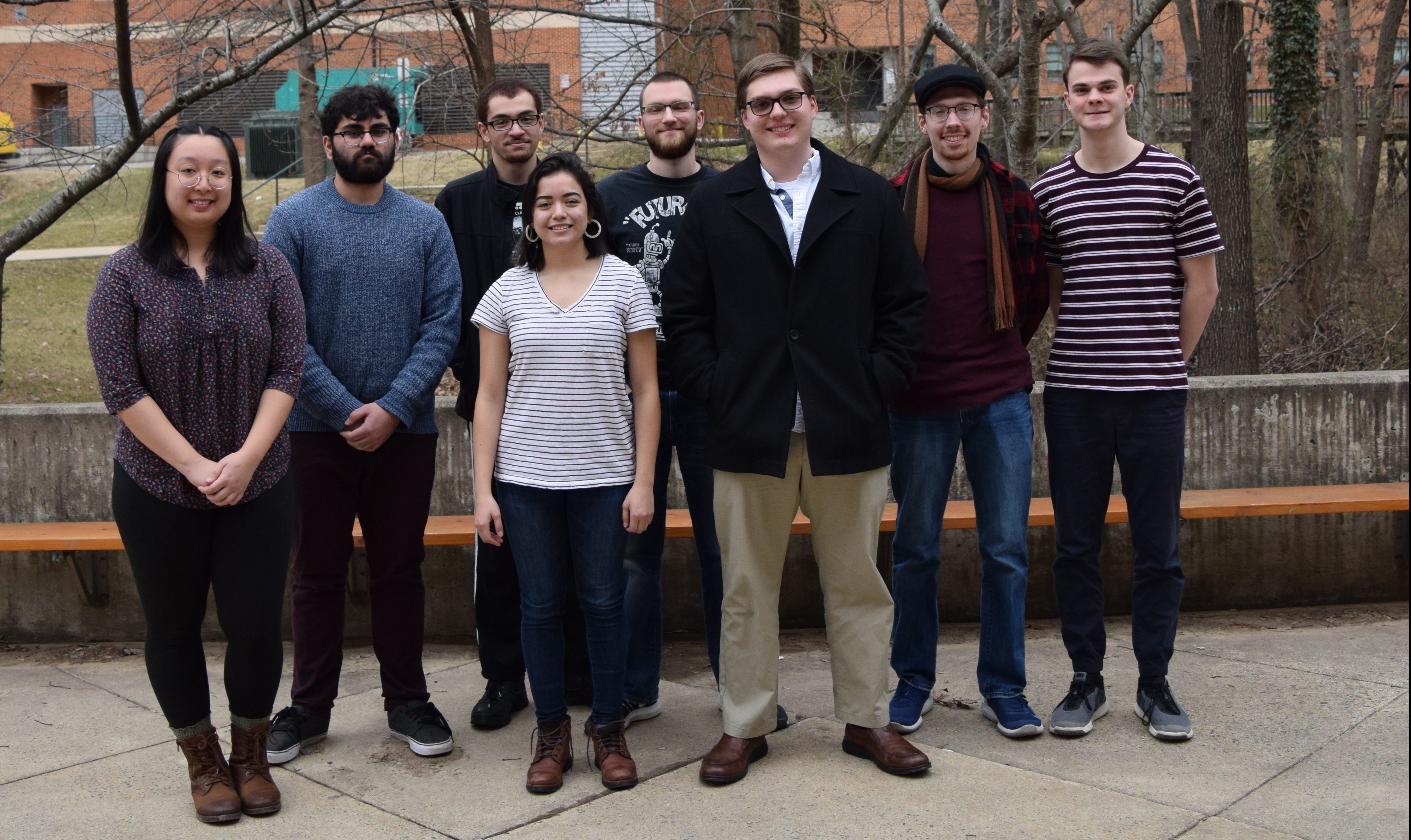 WHAT IS “THE FORGE?”

So, “The Forge” is a fantasy and science fiction magazine. It focuses more on poetry, micro-fiction and shorts stories as a literary submission topic. So we accept submissions from both our staff writers, who constantly work every week submitting stories, and we also accept submissions from both people on George Mason and outside of George Mason. It’s kind of akin to “Volition,” so it’s a literary journal.

WHAT MADE YOU GUYS START “THE FORGE?”

So what happened is when I submitted the idea to Kathryn, the director here, I looked on the different publications that we had and I saw that we didn’t have any science fiction or fantasy related things. So I just pitched the idea one day and Kathryn accepted the idea and it’s just been smooth sailing ever since. This was I think April of last year, yeah, so we’ve been working to get our first issue out for quite a bit now.

WHAT CAN PEOPLE EXPECT TO SEE FROM “THE FORGE?”

People should look for primarily short stories and micro-fiction stories, but we also do poetry. Like I said, we’re a fantasy and science fiction related magazine, so all of the submissions will be in those two genres. But some different issues that we’ll have, like for our October issue, we’ll have like horror genre stuff mixed in with science fiction and fantasy.

WHAT MAKES “THE FORGE” UNIQUE?

I would say it’s unique in the fact not really any college in this day and age has really done this too much. George Mason did it a little while back, but it was kind of like a partnership with another place. But there hasn’t to my knowledge—in recent years there’s been a lot of colleges I’ve looked at, there hasn’t been a student-led science fiction and fantasy literary magazine. But I think that it’s special because it gives both my staff writers and editors a great perspective of what it is to work in a magazine, and it also gives them something that they can use to build their resume. So I think that’s mainly why I founded the magazine, to help people that write fantasy and science fiction.

HOW CAN PEOPLE JOIN “THE FORGE?”

They can email me at ereynol@masonlive.gmu.edu. They can do that, or they could reach out to one of the other staff members. A lot of our staff members have actually reached out to other people. That’s how they joined our team. Word of mouth is really strong. So if they want to do that, just contact me at that email, we’ll set up an interview and we’ll get to you as soon as possible.