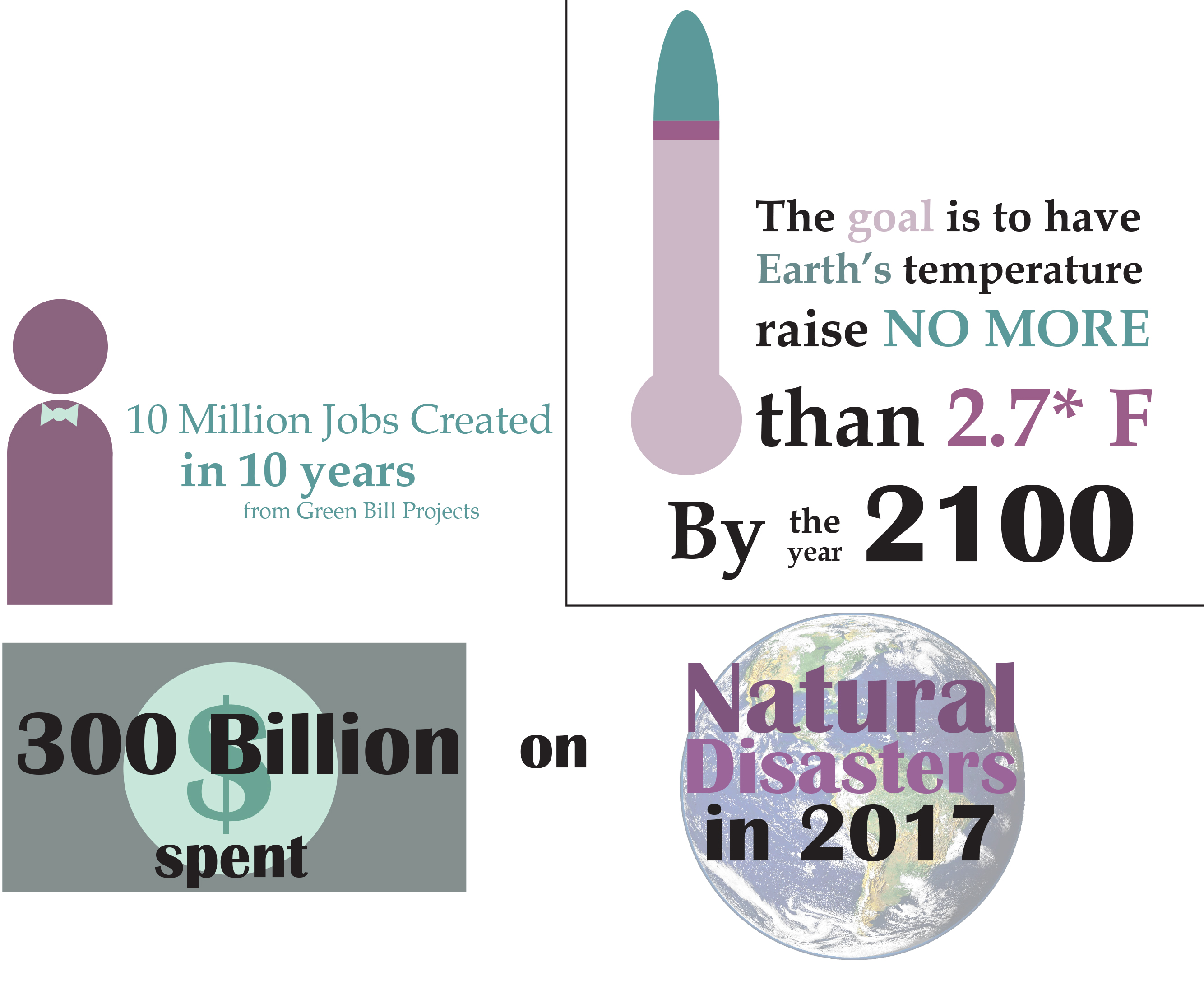 The Green New Deal website describes the program as “moving America quickly out of crisis into a secure, sustainable future. Inspired by the New Deal programs that helped us out of the Great Depression of the 1930s, the Green New Deal will provide similar relief and create an economy that makes our communities sustainable, healthy and just.”

The resolution aims not only to end America’s dependence on fossil fuels, but also to create millions of jobs and boost the country’s economy.

New York Rep. Alexandria Ocasio-Cortez, along with Massachusetts Sen. Ed Markey, introduced the Green New Deal resolution seeking to align with the Paris Agreement. Its goal is to drastically cut U.S. carbon emissions, which will prevent the globe from warming more than 2.7 degrees Fahrenheit by 2100.

According to Ocasio-Cortez and Markey’s resolution, global emissions must be cut in half by 2030, leaving just 11 years to accomplish this. In addition to the bill making the U.S. 100 percent reliant on completely renewable resources, it also works through five main goals that will create nearly 10 million jobs in the next 10 years.

Environmental scientists have remarked that 2030 may be a bit of a lofty goal, but with a rigorous plan in place it would be possible to reach the resolution’s goals by 2050.

The first goal of the resolution is “to achieve net-zero greenhouse gas emissions through a fair and just transition for all communities and workers.”

The second is to “create millions of good, high-wage jobs and ensure prosperity and economic security for all people of the United States.” FDR’s New Deal during the Great Depression initiated the creation of jobs and programs to pull the country out of economic crisis. The Green New Deal plans to create millions of jobs on projects changing the country’s dependence on fossil fuels to systems powered by renewable energy.

The third goal of the Green New Deal resolution plans “to invest in the infrastructure and industry of the United States to sustainably meet the challenges of the 21st century.”

The fourth goal of the bill is “to secure for all people of the United States for generations to come clean air and water, climate and community resiliency, healthy food, access to nature and a sustainable environment.”

Ocasio-Cortez’s office wants not only for the demand for energy in the U.S. to be met by clean, renewable resources, but also to move away from the use of nuclear energy.

The resolution seeks to protect groups of people who are more susceptible to climate change and major economic shifts, which it referred to as “frontline and vulnerable communities.”

NPR pointed out that this is a nonbinding resolution, meaning that while its passing would hold great significance symbolically, “it wouldn’t itself create any new programs.”

The resolution has found support with progressives such as 2020 presidential candidate Kamala Harris, as well as Mason students who are following its progression into Congress.

Elijah Nichols, a freshman at Mason, gave a presentation on the resolution to fellow Mason students at a George Mason Democrats (GMU Dems) meeting on Tuesday, Feb. 12.

Nichols told Fourth Estate that he wants to educate his peers on this topic because of his background.

“As someone who comes from an area that is on the cusp of an urban scene and a more rural area, I was intrigued by the Green New Deal,” Nichols explained.

He continued, “Tackling an issue like climate change does not have to negatively impact the market of jobs out there, especially when we have smart public investments like this resolution calls for.”

Despite the support from prominent Democrats and Americans who are following the resolution closely, it could still be harder to sell in Congress.

One of the reasons why the resolution may face an uphill battle for bipartisan support is the cost. Forbes described the Green New Deal as “nothing short of a wholesale re-imaging of our national economy.”

Ocasio-Cortez’s office also told NPR they plan to “upgrade all existing buildings” in accordance with higher standards for energy efficiency. Their goal is to support family farms and “promote universal access to healthy food.” They also want to guarantee a job and high-quality health care for every American.

Within the next 10 years, the resolution aims to complete the following 14 programs to eliminate all greenhouse gas emissions: