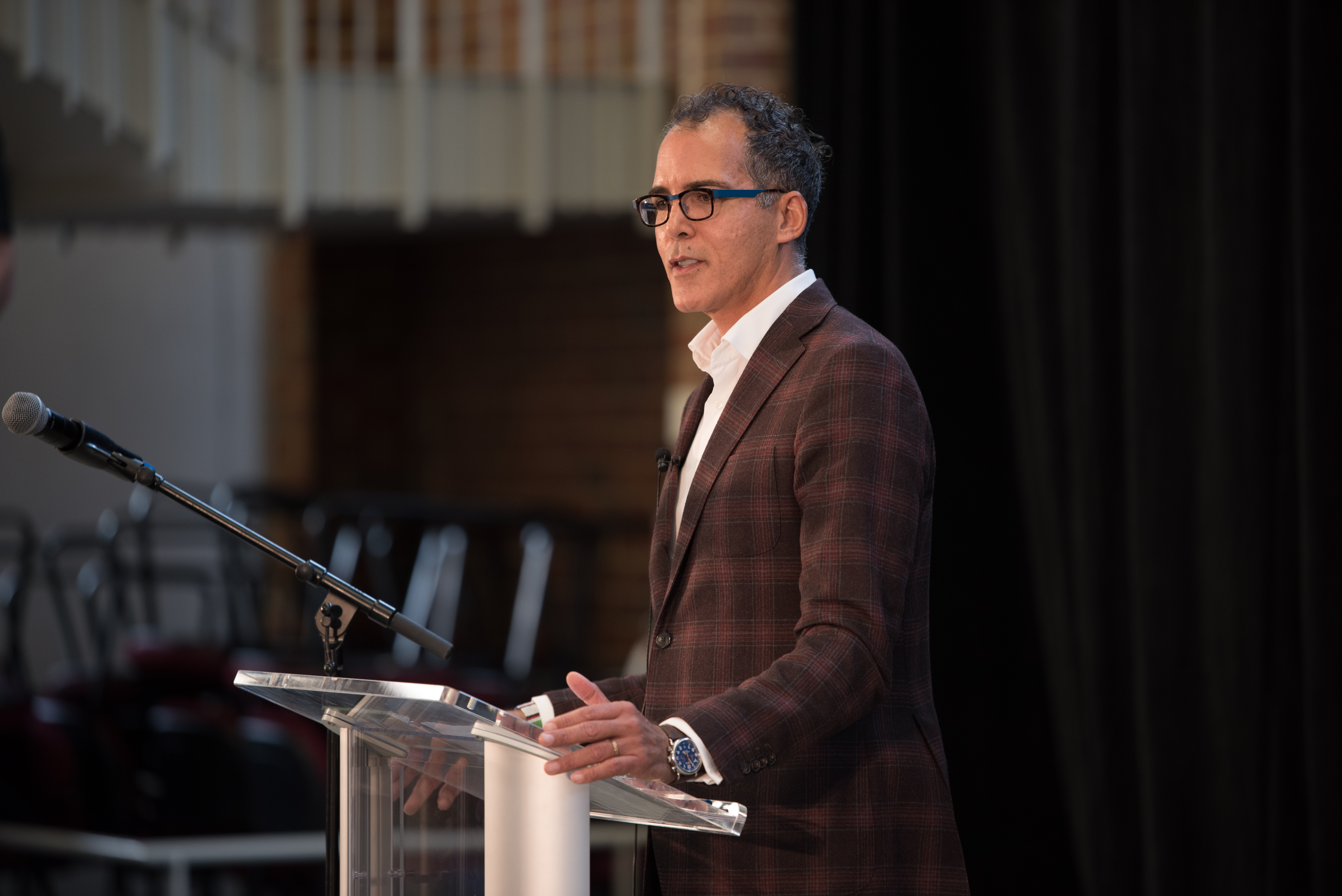 James Forman Jr. gives a lecture on the mass incarceration of African Americans

*Not actual name for confidentiality purposes

Social justice is one of Mason’s greatest values. Many dedicated students and faculty are motivated and passionate about the societal problems that plague America and the world. Roger Wilkins, a civil rights leader and history professor at Mason, was no exception. Therefore, the Philosophy, Politics and Economics Department has dedicated a lecture series in honor of his achievements.

James Forman Jr., a law professor at Yale and author of “Locking Up Our Own: Crime and Punishment in Black America,” was the inaugural speaker for this first annual series.

Before Forman gave his lecture, both Professor Matthew Scherer, the director of the Philosophy, Politics and Economics program, and President Ángel Cabrera spoke about Wilkins and his importance at Mason and in the world. Afterward, Wilkins’ daughter, Amy Wilkins, spoke about her relationship with Forman and attested to his dedication to the same issues that her father fought against all his life.

For most of his talk, Forman outlined the many points he made in his Pulitzer Prize-winning book and his motivations for writing about this injustice that affects millions of African Americans every day.

In addition, Forman’s experience in the criminal “legal” system as a public defender motivated his writing. He called it the “legal” system because, he said, “it doesn’t deserve to have the word ‘justice’ in it. Not yet.”

One of the most impactful stories he gave was about his experience defending a young African American man, called Brandon*. Brandon was being tried for possession of marijuana. Forman, the son of former Student Nonviolent Coordinating Committee (SNCC) members who marched alongside Martin Luther King Jr., was shocked to see the judge twist the civil rights movement into a “perverse rationale for locking up Brandon,” he said. All these experiences pushed Forman to research and write about the unfair and disproportionate incarceration of the African-American population.

Forman spoke about the constraints that reformers and activists face in reforming the current legal system. History is one of these constraints. Forman said, “Slavery is most of American history … not a unit.” He spoke about “White-people rule, [which] has been 85 percent of American history,” as well as the heroin and crack epidemic of the 60’s and 70’s. The epidemic had a disproportionate and overwhelmingly negative effect on the African-American population.

Additionally, he spoke about the constraint of politics on reformation efforts.

Forman talked about the “all-of-the-above strategy” that many Black elected officials have, which includes fair housing, more jobs and better health care for the African American population. He said, “For 50 years, [Black elected officials] have been going to Congress with the ‘all-of-the-above strategy’ and have been coming back with funding for one of the above—police and prosecution.” In other words, the over-policing and prosecution of Black individuals adds to the mass incarceration problem that America faces.

So how does one enact change? “Jury service,” Forman said, because the right to serve is “right next to voting … it is a different place to vote.” He knows that many dread jury duty and find several, sometimes creative, ways to avoid it. He urged all to participate in this right, because “if you avoid the jury, then the jury will be full of people who are alright with the criminal justice system.”

After his lecture, the floor was opened for any questions or comments from the audience. Professor Wendi Manuel-Scott was the moderator, and a few people came up and presented challenging yet insightful questions for Forman to answer. Afterward, a book sale and book signing commenced. A freshman student in the audience, Jessica Vasquez, said, “as a Mason student, I am proud that we don’t back down from talking about the issues that affect our nation.”

James Forman Jr.’s book, “Locking Up Our Own: Crime and Punishment in Black America,” is available to purchase on Amazon.

As the Days Get Shorter