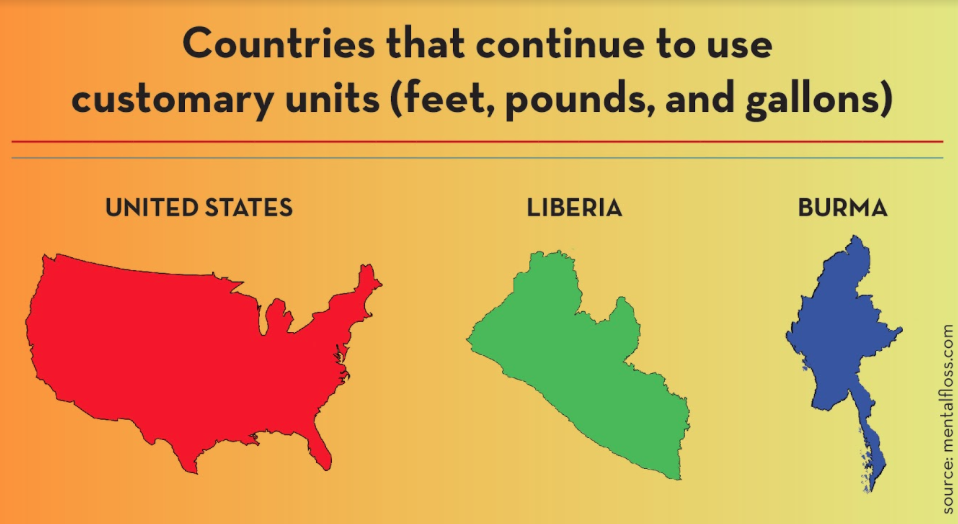 May 20, 1875 was a dark day in human history.  On that fateful day, a gaggle of diplomats convened in Paris — where all disastrous diplomatic gaggles convene — and erased centuries of human history in one fell swoop.

I am, of course, talking about the catastrophic signing of the Treaty of the Meter.  It established the General Conference on Weights and Measures, an intergovernmental organization tasked with cleansing measurement of any sense of historical significance.  The eleventh meeting of this organization in 1960 was responsible for the imposition of the International System of Units, or SI units.

Anyone who has taken a science class is familiar with this system, commonly called the metric system.  We have all heard it: “It’s base ten, so it’s easier!” and, “The rest of the world uses it, so we should, too!”

Let’s dispense with these seemingly obvious points because if you give these aspiring tyrants an inch, they will take a mile — and probably an ounce and a pound, too.  First, we measure time on a base 60 system, and the absence of tens there doesn’t seem to bother anyone. Second, has your mother never asked you that timeless rhetorical question: “If everyone else jumped off a bridge, would you follow?”

We should heed this motherly scolding.  The origins of the metric system are in the tumultuous tyranny and terror of the French Revolution.  The idealized, utopian nonsense that passed as intellectualism at that time produced the meter and the kilogram as a way to stick it to King Louis XVI, whose regime used measurements from the age of Charlemagne.

Contrast that with the origins of the US customary system.  As the name suggests, the origin is custom and tradition. Many units arose from specific professions like farming, brewing, weaving, and surveying.  These were regular people making units that were useful to them in their day-to-day lives.

For example, an acre is a US customary unit that was created to express how much land one farmer could plow with one yoke of oxen in one day (it has since been standardized as 43,560 square feet).  I don’t know a whole lot about farming, but I could roughly envision how large that is. I don’t have any good conception of what a square kilometer is. That is because it has no origin in anyone’s conception of anything: the meter is defined as the distance traveled by light in a vacuum in 1/299,792,458 seconds. Because that makes sense.

I would much prefer the acre. For example, Mason’s campus is 817 acres. That means that if I got a yoke of oxen, it would take me 817 days to plow the whole campus. Or, on the contrary, I could get 817 yoke of oxen and hire 816 other people, and together we could plow the whole thing in one day.

But the use of the metric system denies me the ability to conceptualize how amazing that would be and instead imposes upon my wandering mind the strictures of the diktats of some committee that thinks it knows best how everyone should measure everything.

The US customary system is beautiful because it was standardized from the bottom up.  No committee meetings were called. No treaties were signed. Conversion factors were eventually made uniform, but the units themselves arose naturally from people doing their jobs who just needed a good way to measure stuff.

And that still happens today. It isn’t farmers who are making units anymore. Now it’s computer scientists. The bit is a unit of information that is either a one or a zero. Eight bits make a byte. Oh, the horror, it’s not base ten! It’s not an SI unit, either! And guess what? It worked just fine to be the unit of measurement that allowed our current information revolution to take place.

A customary system of measurement allows us the flexibility to think and create and grow from the bottom up.  The metric system introduces a superfluous intergovernmental bureaucracy to control measurement from the top down.

It is out of that opposition to tyranny that I am hereby declaring May 20 to be Customary Units Appreciation Day to thumb my nose at the Treaty of the Meter and clap my hands for the greatness of the inch.  And I can’t think of a better way to celebrate than with a cold drink — from a 12-ounce can.

OPINION: Maintaining Your GPA and Your Sanity