Why he chose Mason and his take on school gun violence

Virginia Secretary of Education Atif Qarni is still a math teacher at heart. On National Pi Day, he walked a sizable slice of cherry pie straight to his receptionist before noticing us in the waiting room.

As pie was passed around the office, Qarni shared why he chose Mason for his Masters, his focuses with preventing gun violence in schools and the importance of visiting classrooms as a government official. 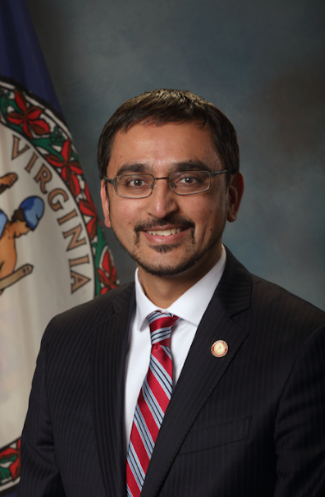 Courtesy of the Office of the Secretary of Education

Nearly a decade ago Qarni wasn’t thinking about politics when he crossed the campus clock tower on the way to history class. After graduating in 2009, his Masters in history and teaching license from Mason brought him to Prince William County public schools, where he taught civics and economics among other subjects.

“I had no intention of going into politics […] I’m a third-generation teacher, a lot of family members of mine are in the education field,” said Qarni.

He was frustrated with the quality of education, which he felt was declining – along with teacher salaries remaining stagnant after the recession and large class sizes where he taught. He was defeated in his run for state Senate in 2015 and House of Delegates in 2013.

While Va. Governor Northam was campaigning, Qarni said he was in the peak of his educational advocacy and caught Northam’s attention in his selection of the education secretariat.

“I got involved with organizing efforts and talking to school boards and different decision-makers, really advocating for quality education,” said Qarni, “that just resulted in running for office and ending up in this position.”

Now, he has much more to consider in the breadth of education concerns. We spoke just hours after hundreds of thousands of students nationwide walked out of class at 10 a.m. for #NationalWalkoutDay, to demand gun law reform and to honor the 17 lost victims of the Parkland, Fla. shooting.

His message to students is that “school safety is a top priority for us.”

He says his office regularly meets with other agencies that are concerned with school safety, such as the office of homeland security and the office of health.

Sitting across from caricatures of his two children on the windowsill, Qarni says “we want everyone to feel safe in a school setting so we can have quality education. We don’t want anyone to have anxiety or feel unsafe.”

“Schools are not meant to be combat zones, they’re not meant to be prisons,” said Qarni. “We are there to focus on good quality instruction for kids so they can grow intellectually, grow as critical thinkers.”

Qarni mentions that schools cannot be seen as one unit when considering security measures.

“Schools have regional differences, how the layouts are, so there’s so many details. Some schools do a very good job for safety measures.” He says when schools and local law enforcement have successfully averted these dangers, it’s not talked about.

“Our approach is to look at things that are working very well and how we can take those models and share and apply them elsewhere to enhance safety features, whether it’s getting more secure buildings or more [security] presence.” Qarni said.

He then turned the conversation to the importance of “behavioral health supports,” meaning increasing the ratio of school counselors and psychologists to students.

“I believe we’ll really see improvements” if schools invest in better trauma-informed education, Qarni said. Part of that means teachers need to be better equipped to work with kids who might’ve suffered trauma.

With National Walkout Day practiced in public schools everywhere and March For Our Lives in D.C., Qarni added that Governor Northam has supported students’ first amendment rights to express their frustrations.

When it comes to higher education institutions, Qarni says universities are given a lot of autonomy so things like tuition rates are up to the individual schools, but the office tries to work through the State Council for Higher Education to make sure tuition stays affordable.

Qarni said affordability is a priority, “we want kids across the commonwealth, all Virginians, to have affordable accessible college education if they choose that route.”

He mentioned that sometimes there’s a perception that universities might be a big business, and while that could be a case, “oftentimes when tuition rates go up and universities are taking funding from – whether it’s out of state or in state students –  a lot of the funding is being used to provide financial aid for students who can’t afford those tuitions so it is being put to good use.

His other priority with universities is predictability, meaning better planning in higher education institutions to prepare students for the jobs of the future.

Qarni said through his recent interactions with Mason he sees the university’s approach, “is very innovative, very creative –it’s really heading in the right direction.”

He’s confident Mason is continuing to create a strong alumni base that can come back and continue to help it out.

When recalling his time at Mason, Qarni said he chose it because it “had a very good, established history program and teaching licensure program, both of the areas I was very interested in.”

He had a great experience there, enjoying the classes and professors, specifically remembering Dr. Hold, who he had a few classes with.

Qarni liked that the teaching licensure program matched him with a high school in his local area.

RETURNING TO THE CLASSROOM

While former university presidents have assumed the sec. of education position, Qarni said going from a k-12 classroom to his position is unheard of.

As a member of Northam’s cabinet now, Qarni believes in returning to the classroom.

“Having a teacher at the head of the table really makes a big difference because it’s a different perspective that was really missing in the past.” Qarni said, “the governor really believes it will benefit his decision making and I agree with him. I feel that I provide a perspective that’s really necessary.”

Starting this year, the Northam administration will make it an annual practice to go into classrooms during Teacher Appreciation Week, May 7-11, including the governor and first lady.

“About 100 [Va. government members] across the commonwealth going into a classroom at the same time in the short span of one week, that’ll really elevate the issues of education and they’ll have a statewide conversation.” Qarni said.

Qarni will substitute in five different schools due to his credentials, while other government members will shadow teachers. 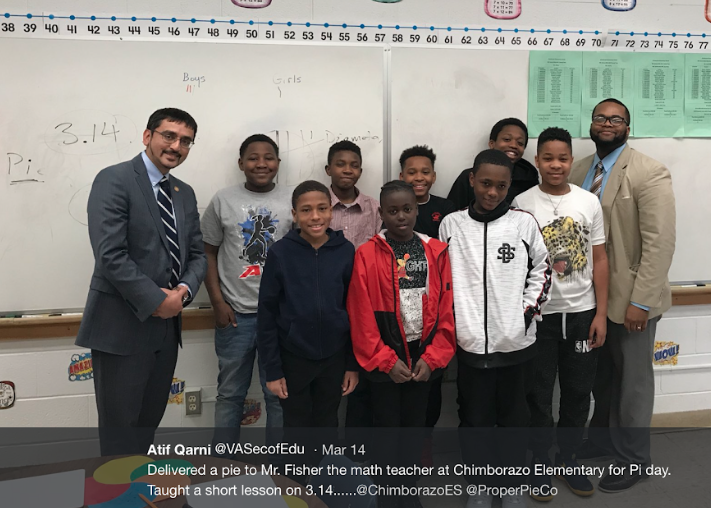 Making clothes out of condoms

Making History with the Mural Festival