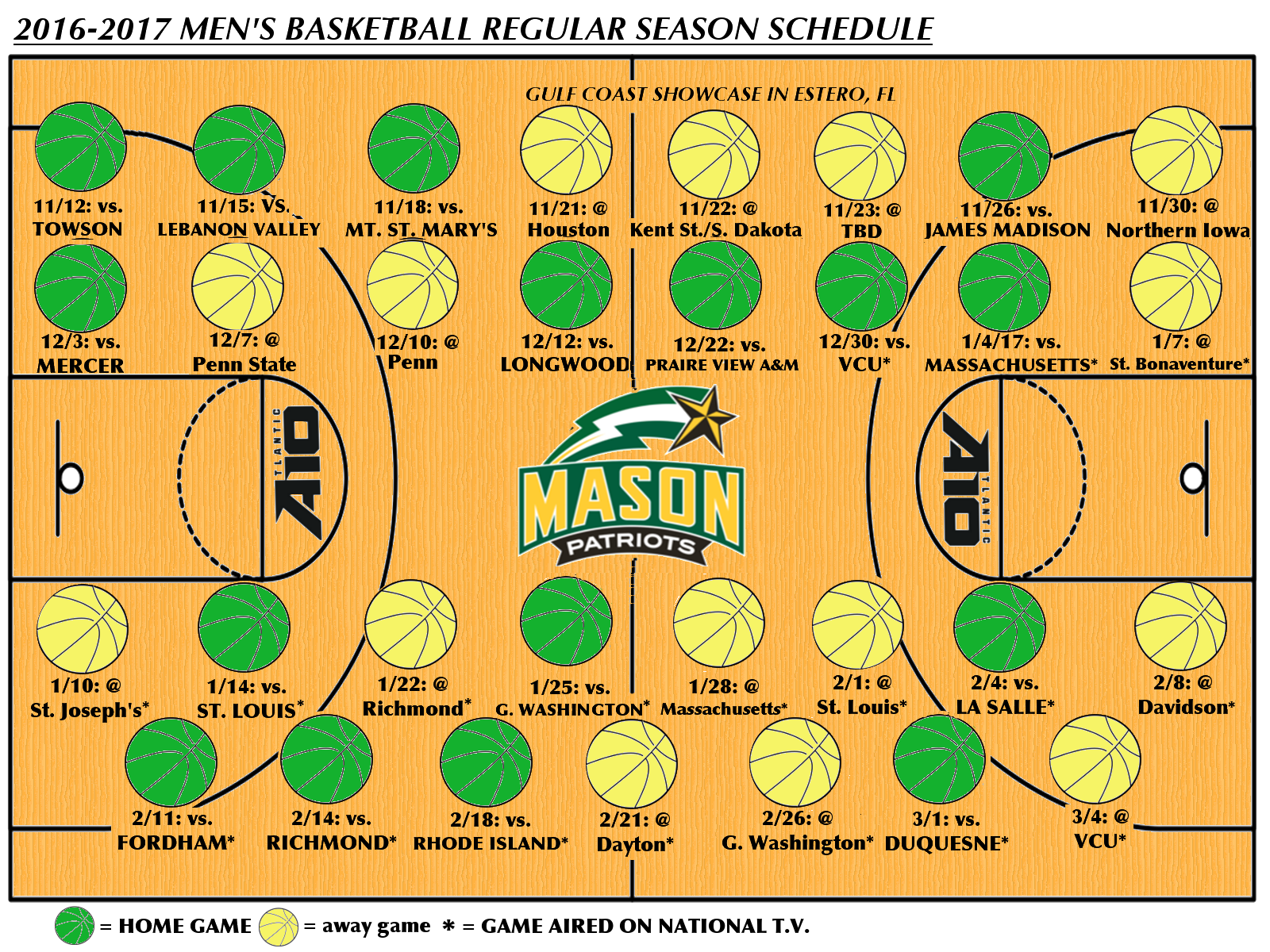 The men’s basketball team’s regular season schedule was released on Sept. 6, and it features nine games that the Green and Gold will contest on national television.

The team’s 2016-2017 campaign will begin on Nov. 12 with a home game against Towson University, and will end on March 4 with a road game at Virginia Commonwealth University.

The men’s basketball schedule is divided between non-conference and conference play. The Patriots will play teams that are not in the A-10 Conference until Dec. 30, when they host VCU.

That matchup will be the first of nine games to be featured on national television, which will appear on CBS. Other games will also be shown on NBC and the American Sports Network.

The Patriots’ schedule includes a three-day excursion to Estero, Florida, where they will participate in the Gulf Coast Showcase from Nov. 21–23. The Gulf State Showcase is a tournament that includes eight teams which will square off to highlight their abilities and their programs.

Their matchup with Houston will be among the most challenging games this season, Livingston said, who also listed games such as their Dec. 3 matchup hosting Mercer University and their Feb. 21 matchup visiting the University of Dayton.

The last time the Patriots played Dayton, “they came in here, scored 98 points on us, blew us out by 36,” Livingston said. “That was a tough matchup. They kind of just did everything right.”

But Livingston noted that every game will be a challenge in its own way. “I think [the A10] is the sixth-ranked conference in the country, so every single game is going to be a tough game,” he said. “But I’m really happy about that, though.”

The key to victory, he said, “is being all-in for each other, and wanting to get the ‘W,’ which is the most important thing for the team.”

The team also needs “to play how we want to play, not letting the other team dictate how we play, playing our basketball, which is unselfish, and I think we might want to go uptempo a little bit.”

Shooting and preventing turnovers are also crucial, as well as strengthening their defense, improving their shooting accuracy and overall amplifying their abilities.

The Patriots will ultimately play 31 games throughout their season, 16 of which will be home games. The end of the regular season on March 4 will herald the beginning of March Madness, which itself will end April 3 with the national championship.

“Overall, I’m really happy [with the schedule],” Livingston said. “Non-conference is tough. It’s going to get us prepared for the conference. And the A-10 conference schedule is always a great schedule, we play a lot of tough teams.”
Head coach Dave Paulsen could not be reached for comment.