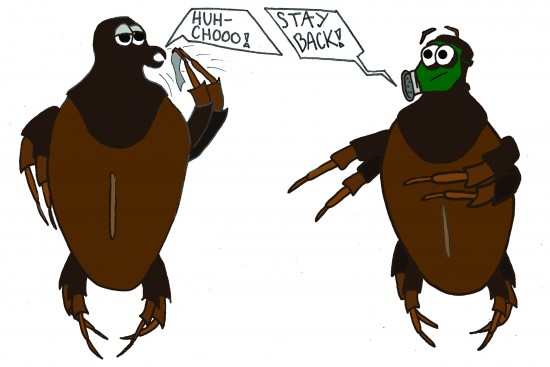 According to Lance Liotta, co-director and medical director of the Mason-based Center for Applied Proteomics and Molecular Medicine (CAPMM), this study was the largest of its kind that explored early indicators of Lyme disease. The study examined 300 patients, Liotta said in a recent Mason Newsdesk article.

The study was funded by the National Institutes of Health (NIH) and CAPMM worked with Ceres Nanosciences Inc., a privately owned life sciences company founded and run by Liotta and co-director Chip Petricoin, to complete the research. While the technology used in the study is licensed to Ceres, the research was done through CAPMM under the direction of tenured Mason systems biology professor Alessandra Luchini.

“If you are bit by a tick, you can’t be sure if you will get Lyme disease — that is the biggest problem right now,” Luchini said in the same Mason Newsdesk article.

The early detection test involves taking a sample of the patient’s urine and applying Ceres Nanotrap technology to find the earliest traces of Lyme disease. The test can detect the disease even when traditional diagnostic tests cannot by detecting proteins produced by Lyme disease-causing bacteria.

“There is an invasion of the pathogen in our skin first and then it goes into the blood, and then the organs … everything that exists in the blood that needs to be exited is filtered through the kidneys … And what the Nanotraps do, they occupy all the volume of the urine and separate the bacterium. In other words they act as a vacuum cleaner, they suck up all the proteins,” Luchini said.

According to the Centers for Disease Control and Prevention (CDC), Lyme disease is caused by the Borellia burgdorferi bacteria, which is transmitted to humans who are bitten by infected blacklegged ticks. Symptoms include joint and muscle aches, fatigue, fever, headaches and swollen lymph nodes, according to the CDC. In some cases, the erthema migrams rash, which resembles a bullseye, can also be present. However, a bite from an infected tick does not always result in Lyme disease.

Traditional Lyme disease diagnoses work by measuring the patient’s antibody response to the disease. However, it takes about four to six weeks for infected patients to develop this response, so tests often come back negative, according to the Mayo Clinic. Sometimes, patients who have been given a false negative diagnosis in the past will return to their doctor years after being infected, convinced that they have Lyme, Liotta said. The new early detection test aims to change that.

“Most infectious diseases are treated with Serology,” Luchini said, “which means you try to detect the immune response [to the disease]. This takes some time, so the problem is early diagnosis. You cannot do diagnosis early enough because it takes time for the body to realize the pathogen is present and to create the response.”

Luchini said another challenge with Lyme disease is knowing when the patient is cured and when to stop antibiotics.

Luchini said that the early detection test can also be used to monitor a patient’s progress and see when the proteins stop appearing in the patient’s urine.

“You can [use the early detection test to] monitor for treatment success. In other words, you can have a good idea when to stop antibiotics,” Luchini said.

According to Luchini, her laboratory is certified by the College of American Pathologists (CAP) to perform the test and researchers have all the certification they need to perform the test and diagnose patients. However, before CAP can grant other research groups access to the test, the test must receive approval from the U.S. Food and Drug Administration (FDA). In order for FDA approval, Luchini said, Mason researchers need to develop a device or diagnostic kit that can teach external researchers how to use the technology. Luchini said that she and her team are currently working to create such a kit.

“Our future, very short-term test plan is to create a device to perform the test, and get FDA approval. … At this moment, we run this in our lab, so it’s a lot of workload,” Luchini said.

The team is also working to create early detection tests for diseases such as Ebola, malaria, tuberculosis and Chagas disease, Luchini said. They are also looking to create early detection tests for cancer and schizophrenia by searching for biomarkers. For example, one future test may be able to determine if someone is likely to develop schizophrenia by searching for biomarkers in their sweat. Biomarkers are characteristics of biological processes that can be measured and evaluated as indicators of pathogenic processes or pharmacological responses, according to the National Institutes of Health (NIH).

Luchini said the idea for the early detection test actually was inspired by the search for an early detection biomarker test for cancer and the concept of applying the technique to Lyme disease came from a student whose family had been affected by Lyme disease.

“I think it’s a nice example of teamwork, perseverance and following your ideas. I think it makes for a nice story,” Luchini said.

Liotta and Petricoin founded CAPMM in 2005. The center’s biomedical research team is made up of 15 scientists and nine fellows, whose backgrounds include medical technology, chemistry and biomedical engineering, among others. The center is located within the College of Science, in the School of Systems Biology on Mason’s Science and Technology campus.

The mission of Ceres Nanosciences, according to its website, is to deliver innovative products incorporating the Nanotrap technology to provide diagnostic solutions and research applications that will benefit humanity.

CAPMM urges anyone who thinks they may have Lyme disease to talk to their doctor about participating in the study.