The Flyers led for all but the first four minutes in Saturday’s contest en route to a 98-64 victory over the Patriots, who played without leading scorer Marquise Moore due to an ankle injury.

Dayton took the lead just over four minutes into the game and never looked back. Although Mason was able to hang around for the majority of the first half, the Flyers closed out the half on an 11-2 run putting them up 47-31.

Paulsen said he thought his team was playing good defense early on, but Dayton was able to make tough shots. The Flyers shot 63.3 percent from the field including 7-12 from three in the first half, Charles Cooke and Dyshawn Pierre leading the way for Dayton with 18 and 10 points respectively. 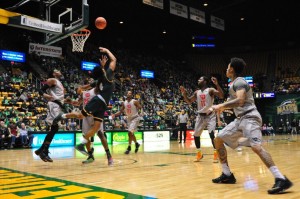 Otis Livingston II finished the half with 14 points, and Jaire Grayer added seven points on three of four shooting for the Patriots, who were 11-29 from the field and four of eight from three-point land.

Dayton’s head coach Archie Miller, when asked how this offensive performance compared to other games, said that is was “probably as complete a game as we’ve had all season.”

“When we make threes, the game is very difficult for the other team,” Miller said. The Flyers were 14 for 22 from beyond the arc for the game.

Five Flyers finished in double figures led by Cooke with 24 points off the bench and Pierre, who netted 15 points to go along with seven rebounds for the game. Dayton’s bench outscored an undermanned Patriot bench 48-16.

As for the Patriots, Livingston II finished the game with 21 points, five assists and no turnovers. Shevon Thompson added seven points and six rebounds, and Jaire Grayer finished with 11 points. Mason shot 36.8 percent from both the field and from three for the game.

A big key for Dayton came on the defensive glass. The Patriots missed 36 shots, many of which were converted into easy secondary transition baskets for the Flyers. Mason, who is +7 in rebounding differential, was out rebounded 41-24 in part due to Dayton’s offensive efficiency.

“I was really disappointed with our transition defense, they really ran the ball down our throat,” Paulsen said.

Paulsen went on to express the same disappointment in the play of his frontcourt, adding that there were plenty of offensive rebounds to be had but that he did not like the way his big guys competed inside.

A bright spot for the Patriots came from their two freshman guards, Otis Livingston II and Jaire Grayer. “We had two guys who really, really, really competed hard tonight in Otis and Jaire,” Paulsen said.

The two freshmen have emerged as the team’s top offensive options over the last couple weeks, especially Livingston, who is averaging 19 points over the last three games.

Mason travels to the University of Rhode Island Tuesday and is home again Saturday, Feb. 13, to take on the Davidson College Wildcats.

Ben Cowlishaw is the Fourth Estate's Assistant Sports Editor. In addition to working at the Fourth Estate, Ben is part of the Washington Capitals Media Relations staff and is an intern at Fairfax County Chairman Sharon Bulova's office. Ben spends his spare time attending concerts, reading up on politics and wishing he was back in Texas.
View all posts by bcowlish →