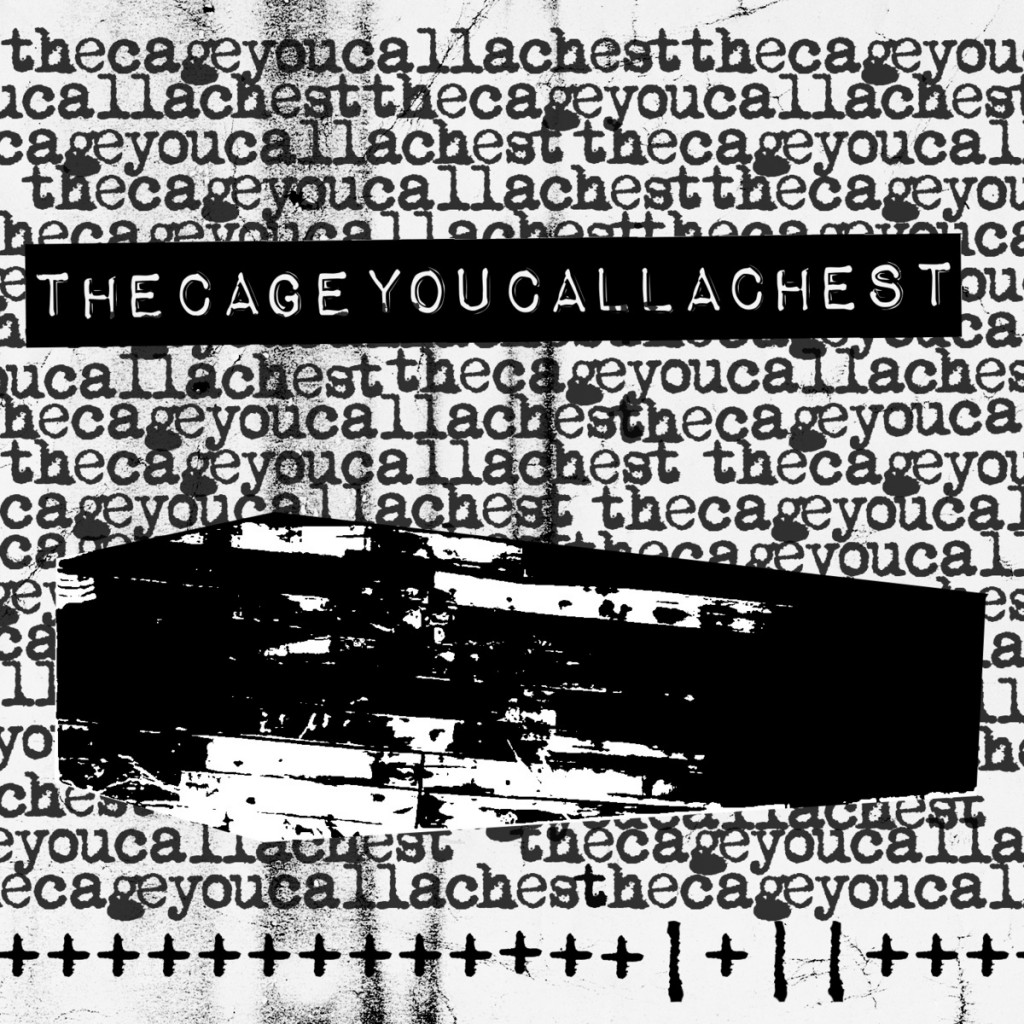 A functional music scene can provide a haven for people seeking asylum from a strict, oppressive society. Increasing numbers of venues, online discussion forums, and other culture hubs are adopting a “safe space” mentality – striving to be an inclusive space where any individual can feel welcome. Mason-based screamo act, The Cage You Call A Chest, also known as Cage, is taking an active and vocal role in creating these spaces of inclusivity and visibility for marginalized people in music.

The band’s two-song sampler, available online, is a whirlwind of chaos and rage, each track teetering on an emotional cliff’s edge. The songs are short and staccato, but raw energy stokes the band’s fire to the highest of catharses. Guitarist Chris Morgan commands the sonic forefront with downright insidious licks. Drummer Paul Karcic and bassist Andrew Schwartz lock down the rhythm section with complexity and tact infused to otherwise straightforward thrashy sounds.

But the weight of the band’s intensity and quality of message comes from vocalist Monique Deleon’s frantic and impressive performance. Their vocals and lyrics burst forth as if generations of frustrations and injustices, piled tight into a tiny space, suddenly exploded far past the cosmos.

While the group already sports a grand, tightly rehearsed sound, their beginnings are relatively humble.

“Monique and I met in [a previous screamo band] Sob Story,” Schwartz said, “and I’ve known Chris forever. It was hard to book shows and practice when everybody’s so spread out, so we wanted to be in a band where everybody’s in the same place.”

“We really wanted to be in another screamo band in the NOVA [Northern Virginia] music scene,” Deleon said, “I’d been really wanting to do something musically. And now it’s four best friends doing something we all like.”

The sreamo and metalcore elements ring clear; the group lists bands like Norma Jean and Orchid as primary influences. But just underneath their skin lies a sprawling wealth of experimentation and social commentary. Cage also lists experimental band I Set My Friends On Fire, hip-hop artist Kendrick Lamar and even classic thrash metal band Slayer as inspirations. The farthest corners of genre fuel the band’s creative process.

“I’m really influenced by people like Kendrick Lamar,” Deleon said, “people who are more socially conscious within rap and hip-hop. That genre is about social consciousness and awareness.”

That element of social consciousness, awareness of problems and struggles at large, is prevalent in the band’s overall aesthetic. The songs’ pounding dissonance cannot be ignored and reflect the plights of marginalized people that Deleon’s lyrics aim to illuminate.

“Our release, ‘No Boys Allowed,’ is me expressing my ideas of feminism,” Deleon said. “Radical leftist feminism, in a way that is accessible to people. Not everybody can shell out thousands of dollars to learn about this in universities. I wanted to make radical ideas as accessible to marginalized people as possible, and this is my outlet for that.”

Lyrics and delivery open a poignant dialogue on topics like racial inequity, fetishization of culture, western white colonialism, sex and gender, to name a few. But the discussion does not start and stop with the words. The band’s very existence is a meta-commentary on the state of diversity in music scenes.

Music scenes, along with communities on a macro level, tend to be dominated by cisgender, white men – cisgender meaning self-identifying to the gender corresponding to one’s biological sex. This one-sided dominance leaves an incredible amount of people feeling excluded from the full, open experience of a music scene. Individuals from the LGBTQ community, people of color, anyone who does not identify as a male and any victim of marginalization often feel left out or pushed aside. Cage feels that this absolutely must change.

“From the perspective of a cis, gay dude,” Schwartz said, “when I got introduced to the scene, I felt super uncomfortable. I experienced a lot of homophobia.”

Screamo, metal and other similar aggressive shows tend to host similarly aggressive patrons. Hyper-masculinity runs rampant and non-conforming individuals can be singled out. Punk scenes have historic pastimes of homophobia, racism and misogyny. While the changing times have brought significant improvement, the DNA from these early scenes remains nestled underneath the rosy exterior.

“We really want to expose a lot of internalized racism, misogyny, and transmisogyny [intersecting transphobia and misogyny] in the scene,” Deleon said. “Everyone is here to be in a ‘safe space,’ but that space won’t exist if trans people don’t feel comfortable here. Don’t push people’s personal boundaries. Go hard, but let people understand that we’re not there to compromise anyone’s safety.”

Beyond the desire to expose misgivings within the community, the band really wishes to create art that listeners can enjoy, but only a specific audience can identify with.

“A big thing we touch on a lot is entitlement to space,” Schwartz said. “The idea that anybody can listen to or share our music, that’s totally fine. It’s not exclusive. But just because you like our music doesn’t mean that you completely identify with it.”

A common struggle with any artistic expression is the difficulty reconciling the art and its message. Fans might appreciate the abrasiveness of the music, but maybe not so much the lyrics. For Cage, however, this is part of the process of exposing problems within the community.

“It’s really important for people who don’t have access to feminist spaces to understand what power dynamics look like,” Deleon said. “I’m always super open as a person to explain, and I will do it in a way that’s as accessible as possible. Until I feel insulted as an artist, as a person, as a trans person, I’ll adhere to that respectability.”

While the band’s presence and dialogue are clear, the surrounding scene poses its own set of hurdles. A common theme among bands in the area is the stagnant nature of the music scene, regardless of genre or aesthetic. Cage, however, makes it clear that the outlook is largely positive.

“I was talking to my friends recently about the scene,” said Schwartz. “Our tiny corner of it, it’s something I really appreciate. The fact that a band of four queer people can exist, and we don’t get beat up at shows or laughed out of the area, that could’ve never happened even 10 years ago. I’ve been hospitalized from violent homophobia, and now I can go play shows and feel safe.”

For the immediate future, Cage is focusing on balancing writing with school and work.

“We’re trying to set up shows for the next season and keep a fresh set in rotation so we don’t get burnt out,” said Karcic.  “We’re just trying to stay active.”

The band hopes to release new music in the winter before the new year, and they are set to appear on a compilation from renowned screamo music blog “Death of a Modernist.” The band already garners buzz and fans in the short time since the release of “No Boys Allowed” and it seems the band is set to grow even more.

Through the band’s socially conscious message and thrashy sounds, The Cage You Call A Chest has opened this area to a fresh expression of acceptance.

“A phrase that really speaks to me is ‘be the person you needed when you were younger,’ along those lines,” said Schwartz. “Playing in Cage, I feel I’m in a band that really is for kids who might grow up like me, feeling at odds with being really into this aggressive music but feeling unsafe at shows. I want to create a safe space.”