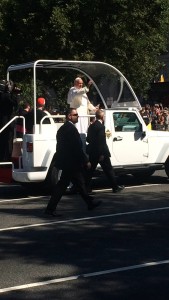 Pope Francis visited Washington, D.C., last week as part of his five-day tour of the United States. This was the current pope’s first visit to the country, and he is the fourth pope to visit the U.S., continuing a tradition started by Pope Paul VI in 1965 when he met with President Lyndon B. Johnson.

The nation’s capital was packed this past week as Catholics and non-Catholics alike flooded in to see one of the world’s most iconic figures. AAA Mid-Atlantic warned that traffic conditions could be “a-pope-calyptic,” with thousands of travelers and commuters trying to get to downtown D.C.

“For me personally, to have the Pope so close is a sign of hope and security that in an ever-changing world one thing will never change, and that’s the Church’s presence on earth. When I gaze upon Francis, I see 2,000 years of human history,” Tanner Sigmon, a sophomore global affairs major and member of Catholic Campus Ministry, said.

On Tuesday, September 22, Pope Francis landed at the Joint Base Andrews military facility in Maryland. A small crowd started cheering “Francisco!” as soon as the pope appeared on the airstair, and the president, vice president and their families personally greeted him there.

The next morning, Pope Francis made a short speech on the South Lawn of the White House followed by a private meeting with President Obama. According to the official webpage of the papal visit, this meeting marked the third time a pope has ever stepped foot in the White House. The pope also celebrated Mass at the Basilica of the National Shrine of the Immaculate Conception on Wednesday and addressed a joint meeting of Congress on Thursday.

Pope Francis arrived at John F. Kennedy Airport in New York on Thursday evening. After a jam-packed schedule that included addressing the United Nations General Assembly and delivering Mass at Madison Square Garden, he left New York to spend the weekend in Philadelphia. The pope departed from the Philadelphia International Airport for Rome Sunday night, concluding his short but historic visit to the United States.

During the Mass, which was delivered in Spanish, Pope Francis canonized Junipero Serra, an 18th-century Spanish missionary who preached in California. Serra was the first saint to be canonized on American soil.

“Father Serra had a motto which inspired his life and work, a saying he lived his life by: Siempre adelante! Keep moving forward!” Pope Francis said during the Mass, according to USA Today.

Serra represents the arrival of Catholicism to the western U.S. in contrast to the Anglo-Saxon Protestants in the east, and he also provides a Spanish-speaking example to the Latino Catholic population. According to the United States Conference of Catholic Bishops, 34 percent of U.S. Catholics are Hispanic or Latino.

“At a time when the Catholic Church is becoming more and more Hispanic and Latino, they’re trying to say, you know, Catholicism in America needs to be understood as always having had this kind of Hispanic element to it,” Robert Senkewicz, a historian and Serra expert at Santa Clara University, said in a recent Atlantic article by Emma Green.

According to Catholic Online, the majority of the 25,000 tickets to the Spanish Mass were primarily distributed throughout Hispanic parishes in the D.C. metropolitan area.

Pope Francis himself is Argentinian, and as the first pope from South America, he is often considered a spokesman for the global South by media outlets like Crux. He entered the U.S. after spending four days in Cuba, and, according to NPR reporter Sylvia Pogglioli, originally wanted to enter the country through the U.S.-Mexico border to make a bold statement but was unable to do so, due to logistical problems. The Vatican’s secretary of state, Cardinal Pietro Parolin, said in an interview that the pope entered the U.S. as “a migrant.”

While the pope’s actions may please one American demographic, another is openly offended. Native American organizations across the country have spoken out against Serra’s canonization, citing the brutalities committed under the mission system and their contribution to the extinction of native traditions.

Senkewicz summarized the two main opposing arguments against Serra. First, the canonization of Serra means that the papacy is taking steps toward approval and justification of the entire mission system, including the castigation, diseases and death it spurred. Second, “to canonize Serra is to justify and whitewash the church’s role in colonial expansion … and the horrible loss of native lives and land that was part and parcel of that process,” according to Senkewicz.

Nicole Lim, executive director of the California Indian Museum and Cultural Center, was quoted by the New York Times days after Pope Francis announced his plans to canonize Serra in January.

“If he [Serra] is elevated to sainthood, then he should be held responsible for the brutal and deadly treatment of native people,” Lim said.

Aldo Peñafiel, a senior graphic design major and communications director at Catholic Campus Ministries, does not think Serra’s canonization is too controversial.

“To canonize Serra is simply to recognize him as a man whom we know with certainty to have made it to heaven. It’s an extremely thorough process … It is in no way declaring any person or system without it’s flaws, nor is it a justification of them but rather a celebration of the blessed life they lived on earth,” Peñafiel said. 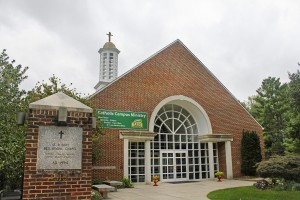 On Thursday morning, Pope Francis addressed a joint meeting of Congress. In attendance were various ambassadors and Supreme Court justices. Pope Francis is the first pope to address Congress, and, according to a statement and video released in preparation for the pope’s visit, this is something Speaker of the House John Boehner has been advocating for 20 years.

Although Boehner and Pope Francis share the same faith, they differ in many of their social and financial politics.

Pope Francis in his recent encyclical called for countries to take more responsible actions toward preventing climate change and curbing global warming. He is also outspoken against unfettered capitalism, calling extreme greed the “dung of the devil” during his visit to Bolivia this summer. Lastly, he has voiced a more welcoming stance toward homosexuality than past popes, asking “Who am I to judge?”, and, although he is strongly opposed to abortion, has criticized the Catholic Church for dwelling only on polemic social issues.

These actions, along with his advocacy for labor rights for impoverished populations, have the press heralding the pope as “progressive.” For one Mason student, however, the pope is not so much moving the Catholic Church forward as he is adhering to Catholic teachings.

“To label the pope as ‘progressive’ certainly depends on one’s definition of ‘progressive’,” Peñafiel said. “Do I think Pope Francis is here to change the things that the Church has taught since its Apostolic beginning? Not at all. Is he here to remind us of the things that many of us Catholics seem to overlook or forget are demanded of us as believers of Jesus? Absolutely.”

Regardless of whether the pope’s teachings actually lean towards the left or not, at least one Republican representative boycotted the speech. Arizona Representative Paul Gosar chose not to attend because of the pope’s views on climate change, telling The Hill that Pope Francis should spend more time focusing on religious extremism and abortion.

“When the Pope chooses to act and talk like a leftist politician, then he can expect to be treated like one,” Gosar, a Roman Catholic, wrote in an op-ed.

Pope Francis’ speech, however, was not extremely critical of America’s free market or social policies. He compared lawmakers’ struggles to those of Moses and said he was addressing the American people through their elected representatives.

“I would like to take this opportunity to dialogue with the many thousands of men and women who strive each day to do an honest day’s work, to bring home their daily bread, to save money and – one step at a time – to build a better life for their families. These are men and women who are not concerned simply with paying their taxes, but in their own quiet way sustain the life of society,” he said.

The pope also spoke at length on the impact of immigrants on the U.S., connecting with the crowd by emphasizing that he, too, is a child of the Americas.

“We, the people of this continent, are not fearful of foreigners, because most of us were once foreigners. I say this to you as the son of immigrants, knowing that so many of you are also descended from immigrants.”

Pope Francis went on to mention the global refugee crisis, advocate for the sanctity of human life with the abolition of the death penalty and protection of unborn fetuses and emphasize the importance of eradicating poverty. He praised business, going on to say that the “noble vocation” should serve to the common good. Throughout the address, the pope referenced four Americans: President Abraham Lincoln, Martin Luther King, Jr., Dorothy Day and Thomas Merton.

He ended his speech with a short and impactful “God bless America!”