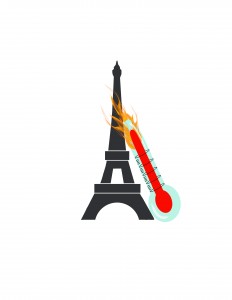 An official delegation consisting of several Mason representatives is headed to Paris at the end of November to attend the 21st Session of the Conference of the Parties (COPs) at the United Nations Framework Convention on Climate Change (UNFCC).

The delegation traveling to the U.N. climate convention, also known as COP21, will consist of Paul Schopf and Jagadish Shukla, Department of Atmospheric, Oceanic, and Earth Sciences professors; Michael Shank, media expert and adjunct professor in the School of Conflict Analysis and Resolution; and Neil Ransom, a graduate student in the Department of Environmental Science and Policy.

Shank attributes Mason’s leadership on climate change issues to the opportunity ahead, noting that it all began in February when the Mason Forum on Climate Change kicked off, and he was connected with Schopf and Shukla.

“The forum’s aim, ultimately, was to help Mason become a ‘leader in trans-disciplinary approaches to climate change curriculum, research and public engagement,’” explained Shank. “Mason has since become that leader and the school’s delegation to the U.N. climate talks in Paris is illustrative of Mason’s leadership at both governmental and non-governmental levels.”

Members of the delegation will serve as observers throughout the conference to build networks while sharing solutions with other non-governmental organizations (NGOs).

“The COPs are the key mechanism through which the UNFCC conducts its business,” said Schopf, Head of Delegation for Mason’s NGO representation at the summit. “The most important change [to come from the UNFCC] has become the concept that all countries, not just developed nations, will participate in reducing carbon emissions.”

The U.S. and China, along with other countries, have already submitted their INDCs, while “key players” such as India and Brazil have yet to announce their commitments.

The representatives’ work at the conference will be beneficial to the Mason community, Shank said.

“Bringing climate-related and Paris-based knowledge, experience, and relationships back to Mason’s School for Conflict Analysis and Resolution will be critical for cultivating the school’s focus on climate conflict,” he explained. “This is a burgeoning field of study and as cases of climate conflict become more commonplace… the academic conflict community must expand its theory and practice portfolio.”

As a Ph.D. student and professor, Ransom plans to incorporate his experience into the courses he teaches. He will include units on climate change and help his student network with professionals.

“I feel lucky to have this opportunity and excited to be able to participate in the most important climate change event of the year,” Ransom said. “I am grateful for the opportunity to attend this conference and represent GMU’s graduate students.”

The summit holds much importance, as the issue of climate change is gaining prominence worldwide.

“The Paris climate conference is critical for the nations of the world to make commitments to reduce the greenhouse gas emissions so that global warming does not exceed two degrees centigrade,” Shukla said. “In the history of our planet, whenever the global temperatures were 2 degrees above the present value, the consequences were catastrophic, especially for sea level rise.”

Another interesting aspect of the summit will be conversations between delegations from the U.S. and China.

“This year’s summit is particularly important because the U.S. and China, two key players in the global climate negotiations, both seem committed to achieve an agreement in Paris,” Ransom said. “With these two players in place, it is hoped a long-term, strategic, and fair agreement can be reached.”

As important as the conference may be, its purpose cannot be overplayed, Shank said.

“The summit’s importance cannot be overstated, of course, as the Paris-induced goals and agreements are only the beginning,” Shank said. “Building international consensus around a common agenda isn’t easy.”

Shank said that much of the work necessary for preventing global warming rests on individuals.

“We can keep tons and tons of carbon dioxide out of the air simply by switching to a more plant-based diet,” he explained.

One example can include switching from meat to soy protein, as it emits 150 times less the amount of green house gasses.

“Eating less meat, which means using less water, grain, and land, will dramatically lighten your [carbon] footprint,” he continued. “We can do the same with our clothes and with our commute.”

“It’s very doable and, most importantly, it’s necessary, as we can’t solely rely on nation-states to navigate the quickly warming planet,” Shank said. “It’s in our hands, too, not solely on Paris.”

Shank also said that if bold commitments are not made before and after Paris to prevent more greenhouse emissions from entering the atmosphere, communities will be at risk.

“Whether it’s food scarcity, water insecurity, extreme weather, or resource wars, these threats are real. They’re happening now, and they’ll only get worse if we don’t act immediately,” Shank said.

Mason professors Andrew Light and Thomas Lovejoy will also be in attendance as part of the United States State Department Negotiating Team and the Global Environment Facility’s delegation, respectively, though they are not members of Mason’s delegation.

Correction: This article originally attributed the following quote to Paul Schopf, “Whether it’s food scarcity, water insecurity, extreme weather, or resource wars, these threats are real. They’re happening now, and they’ll only get worse if we don’t act immediately.” The correct attribution is Michael Shank. The current article reflects this change.

Healthy, active and in college