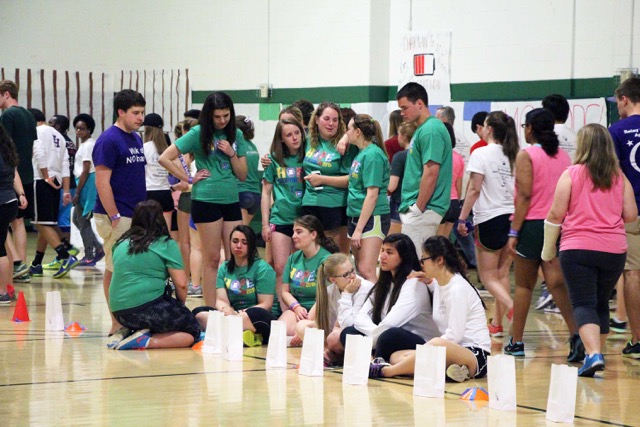 In many ways, Emily Albis is a typical college senior. An accounting major with a theater minor, she’s committed to her studies and hopes to enroll in law school after graduation. In addition to her hefty course load, Emily maintains a busy extracurricular schedule: she’s an active participant in GMU Relay for Life and was recently elected Vice President of Administration of her sorority, Pi Beta Phi.

Unlike most college students, however, Albis is a recent cancer survivor. Consequently, her undergraduate career has looked — and continues to look — a little different from the average four-year stint.

It all began in the fall of 2010 — just months after Albis had begun her freshman year at Mason. At first, she developed a persistent cough, which doctors from her hometown of Virginia Beach attributed to allergies. When Emily began losing her ability to speak without coughing, however, she made an appointment with Mason’s Student Health Services. Dr. Olympia Dallas, a family physician practicing at Mason, ordered an x-ray, which revealed nodules in Emily’s lungs.

“I knew that nodules meant tumors, but I held out hope that it was just an infection or something,” Albis said.

Albis returned to Virginia Beach for a biopsy in late October and was diagnosed with Stage IV Hodgkin’s Lymphoma a week later. After withdrawing from Mason that fall, Emily underwent several rounds of chemotherapy and a stem cell transplant.

According to the American Cancer Society, Hodgkin’s Lymphoma, or Hodgkin’s disease, is one of the most common forms of cancer found in young adults, especially those in their early 20s. Survival rates for Hodgkin’s Lymphoma have increased in recent years due to advances in treatment options.

Nevertheless, funds for researching the disease — and numerous cancers found in young adults — are greatly needed. Approximately 70,000 people between the ages of 15 and 39 are diagnosed with cancer every year in the United States, and cancer is the leading disease killer among this age group, with about 10,000 deaths reported annually. Some of the most frequently diagnosed cancers among young adults include breast cancer, testicular cancer, lymphomas, sarcomas (cancers of connective tissues like bones and muscles), leukemia and cancers of the female genital tract, such as cervical cancer and ovarian cancer.

Young adults with cancer face a number of unique psychological, social and medical challenges: among these are a loss of a sense of independence; educational and financial responsibilities; and concerns over a changing physical appearance, fertility and relationships.

According to a report published by the Ulman Cancer Fund For Young Adults, “a cancer diagnosis often makes it difficult to keep up socially, academically, and professionally … It can be difficult for young adults with cancer to find strong, reliable peer support as they face their illness … and this can lead to feelings of despair and isolation.”

But Albis chose to stay positive throughout her ordeal. “I could either focus on getting better and how great it will feel, or focus on all the bad things and wallow in self pity, and that would have made going through everything so much worse,” she said.

Although Albis had to miss three semesters of college because of treatment, she said her friends at Mason supported her through Relay for Life, a major fundraising event run each year by the American Cancer Society. From fall to early summer, participants raise money for cancer research through RFL’s website and, additionally participants host events to spread awareness and celebrate survival.

GMU Relay members host an all-night Relay for Life event each spring where students are invited to participate in ceremonies, such as a survivor’s walk around the track, and take part in various games and activities.

Despite undergoing rigorous treatments, Albis was able to participate in fundraising efforts throughout the school year and attend GMU’s Relay for Life event in 2012. She was even named the number one fundraiser for Mason for that year. Best of all, she is coming up on her third anniversary of being cancer-free.

“It has been quite a journey, but I am learning to move on and not to dwell on all the bad things that have happened to me,” Albis said, “The important thing is that I am alive, and I am a survivor!”

Last year, GMU Relay for Life participants raised over $86,000, an amount they hope to surpass by the time fundraising closes this summer.