This story was first published in the April 20 issue of Fourth Estate. 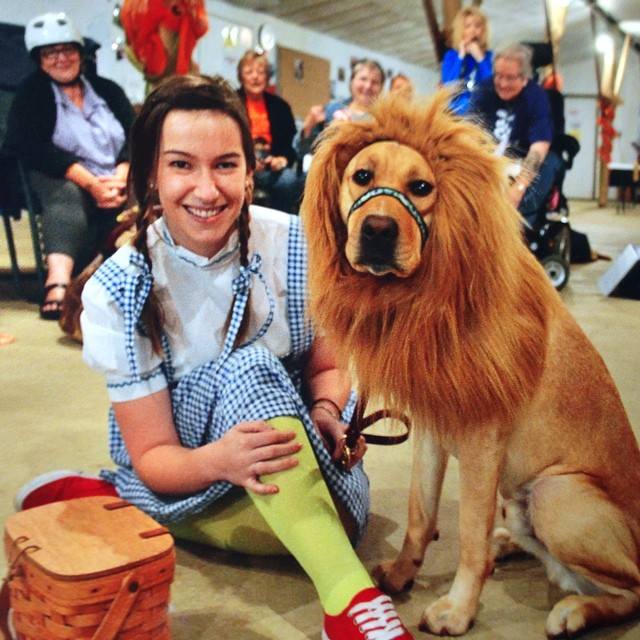 Courtney Simmons and her service dog, Zido, dressed up for Halloween.

Mason is home to many four legged creatures that live in the residence halls, just like its students.

However, many of our students have no idea they are there. Some students have fish, which per university policy are permitted to live in the residence halls as long as they are in a tank ten gallons or less. All other “pets” are prohibited, said Associate Director of Housing Services, Melissa Garza Thierry.

This freshman had a cat named Mila on campus.

“Animals have been known to bring down stress levels and relieve anxiety. This is exactly what my little Mila did for me,” she said. There are options for students who feel like this anonymous freshman. If you are documented with office of disability services, you may be able to have an emotional support animal on campus.

“ESAs can be just about any domesticated animal including dogs, cats, birds, reptiles, rodents, mini pigs, etc.,” said Karen Andrews, Associate director of the Office of disability services.  Emotional support animals are designed to provide comfort and companionship for the students they live with on campus.  They must be vaccinated in ordinance with state laws and are not permitted to go into classes or university buildings on campus, aside from the residence hall in which they live.

Another class of animals allowed on campus are service dogs.  These animals are not considered “pets” by housing, as they serve a significant purpose. Service animals protect, assist, and ensure the success of their owners every day here at Mason. Courtney Simmons, a junior majoring in Communications, has a service dog named Zido on campus. Zido and Simmons are currently living together on campus for their first semester. While Zido was trained for the first two and a half years of his life on how to be a service dog, he still had to go through further training to tailor his abilities to Simmons’ needs. Simmons then spent three weeks in Pennsylvania where the organization, Canine Partners for Life, that paired her with Zido is based. Following their graduation on Nov. 2 of last year, Simmons was able to take Zido home. Once she began her spring semester at Mason, Zido joined her on campus.

Simmons’ need for Zido became more urgent after a cardiac condition that affected her for a few years led to frequent high heart rates and low blood pressure, often resulting in her losing consciousness. Zido helps to prevent situations like this by sensing Simmons’ blood pressure and heart rate spikes or decreases. When Simmons’ heart rate reaches a certain level, Zido will “alert” her to the situation. She then will sit or lay down, to reduce her heart rate to a more normal level. Zido will do the same for her blood pressure. He can also help her by picking things up, pulling her slightly when she walks to reduce the work her heart has to do, and providing peace of mind for her safety. Zido even works while he sleeps. In the event that he is sleeping while Simmons is in need of an alert, Zido can still sense it and has even woken up Simmons’ in the middle of the night to alert her.

Zido wears a harness that is clearly marked with signs asking that individuals do not pet him. Petting a service animal while they are wearing their harnesses which is used to signal to the dog that he/she is working, can distract and confuse them.

Zido and Simmons live on campus in a single dorm on campus with a suite mate. Zido is allowed, by law, to go anywhere Simmons goes. From the car, to public transportation, to class and meetings. When Zido attends Simmons’ classes or meetings, he has a special blanket that he lays on. This signifies to Zido that this is “his spot.”  Simmons said that housing, the office of disability services, and her professors have all been extremely accommodating and helpful. Many professors have enjoyed the extra excitement Zido brings to class, with one professor calling him the best student she has ever had.

Simmons and Zido interact in a way that shows Zido’s true personality. He is able to help Simmons but can have an attitude sometimes. At the end of the day, Zido is just a dog.

“He is an incredibly-well trained dog, but he is not a robot. He is still a dog. There are days where he is just kind of like, ‘no, I don’t really feel like working today.’ Or he will give me this look like, ‘no, I’ve seen you pick that up, I know you can do it,’” Simmons said, “So he’s snarky but with enough treats and praise, he’ll do pretty much anything.”

From service animals, emotional support animals, to pets; these furry friends can offer an array of benefits to students and leave a footprint on campus life.