Females of Color Underrepresented in STEM is a week-long camp aimed at middle-school girls. It seeks to stimulate and nurture students’ interest in science, math, engineering and technology, fields that continue to be dominated by men.

“A lot of the time, women of color – people of color – have a lot against them to achieve in this area,” said Alicia Suchicital, a sophomore bioengineering major who served as a counselor for the camp. “I feel like this was a great opportunity for the girls to see that it can be overcome.”

Although the camp is new, having launched for the first time in July 2014, the Giving Circle’s grants committee was intrigued by its ambition and potential. 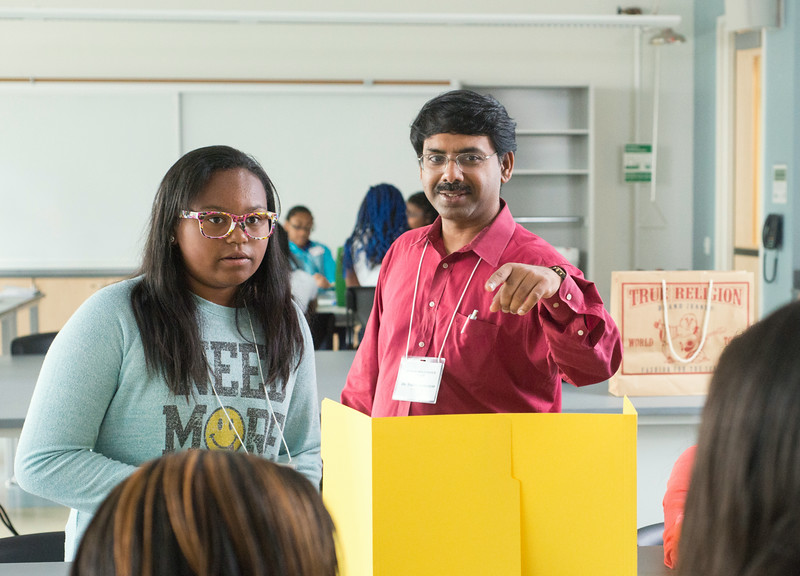 “We felt that the program that George Mason had put together through F.O.C.U.S. was very exciting because it would be targeting a hundred females of color,” said Faith Boettger, a founding member of the Giving Circle and co-chair of the grants committee. “It would have an impact by offering, obviously, STEM education but also the ability for these girls to have leadership and entrepreneurship involvement during the course of the program.”

Mason was one of three organizations to receive a grant from the Giving Circle this year. Marymount University and the Network for Teaching Entrepreneurship each got $10,000 to support their own initiatives.

All of the winning programs were chosen for their commitment to providing science and business education for girls in middle and high school.

“We believe that the programs that we’re supporting in STEM get [girls] at that point where they’re most at risk of choosing not to follow through on some of their passions,” Boettger said. “The programs we’ve selected provide the girls with the support, the mentoring and the engagement that they need to continue to see this as a viable career option.”

Padmanabhan Seshaiyer, director of the STEM Accelerator program, created Females of Color Underrepresented in STEM along with faculty members Claudette Davis and Kelly Knight. They were also helped by Danielle Blunt, a Mason alumnus and founder of the nonprofit organization GIRL, which provides educational and social support for teenage girls.

“One of the big goals [of STEM Accelerator] is outreach and development of new educational programs,” Seshaiyer said. “So, along with several other things that we do – for example, we have programs for undergraduates – these are programs that are catered to work with K-12 students to get them interested in STEM.”

Beyond its specific demographic, Females of Color Underrepresented in STEM is unique for its interdisciplinary structure. Each of the first four days involves activities related to a different letter of “STEM,” and the fifth is dedicated to 21st century skills: communication, critical thinking, creativity and collaboration.

At the end, students form groups and present what they learned to the public.

18 girls attended the program’s first session. It was a massive success, according to Seshaiyer.

“They all overwhelmingly said this was something they did not expect and they were so thrilled they were a part of this camp,” Seshaiyer said. “They didn’t want it to stop. They wanted a continuation. All the parents were asking, ‘What next? How do you sustain this interest?’”

Seshaiyer credits this success in large part to the program’s emphasis on practical and interactive learning. Instead of listening to lectures, students are encouraged to participate in creative projects, such as building roller-coasters to learn about physics or making DNA to learn about biology.

“It’s very important for us educators to start changing our pedagogical practices, maybe move from a lecture-based to a more student-centered approach, where it’s more hands-on,” Seshaiyer said. “Our education system is very geared toward ‘here’s the mathematics, go solve the problem,’ but if you were to change that philosophy to ‘here’s the problem, let’s go find the math to do it,’ then it’s much more powerful.”

Seshaiyer expects to have around 100 participants at this year’s camp as positive word-of-mouth spreads and he receives e-mails from interested parents, students and industry professionals.

The Giving Circle grant money will be used to cover the extra expenses associated with growth, including more counselors, T-shirts for participants and scholarships for those unable to afford the $350 enrollment fee.

“Having our funds coupled with the involvement of our members, we thought [F.O.C.U.S.] was just the perfect fit for the organization this year,” said Emily Daniels, co-chair of the Giving Circle grants committee. “We are so excited to be a part of helping them broaden the net that they can bring in girls under and hopefully lower the cost, which gives you even more access, more build.”

For Suchicital, the camp’s success feels personal. As a counselor, she mentored the students, giving them advice about succeeding in school and pursuing a career in STEM.

“It was really nice because I got to connect with some girls and I feel like I helped influence them to go toward STEM because I really think there needs to be more women in the field,” Suchicital said. “I would’ve really liked to have something like this when I was those girls’ age, but I figured it would be nice if I could go to bat for them because no one had done that for me. That’s why I chose to do it.”

Book by Mason professor says happiness is not always needed