Out in the Night, an award winning documentary produced by Mason’s Director of Film and Video Studies, was screened at Mason as part of the Visiting Film Maker Series.

Out in the Night has been screened at several film festivals and won multiple awards, including Best Feature at the Queer People of Color Film Festival and the Jury Award for Excellence: Best Documentary at the Seattle Lesbian and Gay Film Festival.

According to Film Producer and Director of Film and Video Studies, Giovanna Chesler, the documentary tells the story of a group of African American lesbian friends, the New Jersey 4, who were out in the West Village of New York City in 2006 and were harassed on the street by an older man. When the man realized the women were gay, his threats become violent and sexual. A fight broke out between the man and the women. Though others on the street jumped in to defend the women, the police arrested and charged the women with gang assault and attempted murder. 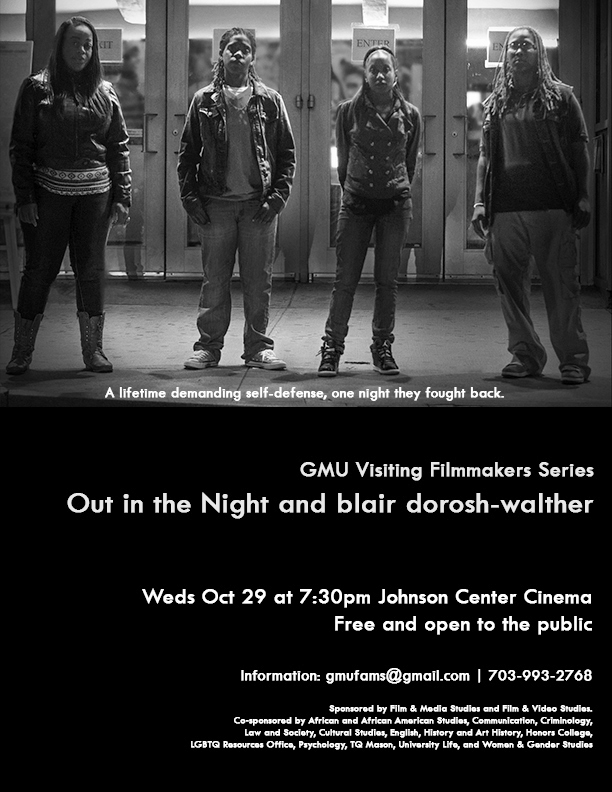 Three other women who were with the NJ4 accepted plea agreements but Renata Hill, Patreese Johnson, Terrain Dandridge and Venice Brown were put on trial and convicted by both the courts and tabloid media. According to Mason’s Film and Media Studies website, the NJ4 were dubbed a “Gang of Killer Lesbians,” by media.

“The media called them a gang, particularly the tabloid media. And the New York Times called the man ‘an admirer,’” Chesler said.

The story of the NJ4 raises several different social issues, including racial and gender identity disparities in the legal system.

“So the story of the New Jersey 4 is interesting because it raises questions about who has the right to defend themselves and also how the media contributes to, I think, egregious sentencing in the courtroom. How gender identity, race and class really make it so that people don’t have power in the courtroom, they can’t claim self defense,” Chesler said.

According to Chesler the film brought up issues that are relevant to students on college campuses who may aspire to become journalists or film makers.

“I think it’s important for college students to understand also the role that media has, I think a lot of our students are interested in being journalists or are film makers and should be aware of the way that when things are framed, they criminalize innocent people,” Chesler said.

According to Chesler, the story of the NJ4 raises so many different social issues and becomes especially relevant to many students from different backgrounds and fields of study.

“Bringing this film to campus was about telling a story that I think brought a lot of students from many different disciplines into one room. And I think it’s also really important that when we tell stories that we look across disciplines and understand how criminal justice, how African American studies, how film and video studies, how film and media studies who organized the whole event, communication, art, you know how all of these people should be at the same table addressing these issues,” Chesler said.

Out in the Night tells of the legal and social issues faced by the NJ4, but their personal stories and backgrounds are shown as well. According to director, Blair Dorosh-Walther, during the discussion panel, the original intent of Out in the Night was to prove the NJ4’s innocence. However, because self-defense would not stand in court, the film became about the NJ4’s individual stories as well as social issues.

“So it’s a very complicated layering of how that moment happened and how the case unfolded afterwards but it’s also about broader sort of political cultural issues for most of the US,” Cynthia Fuchs, director of Film and Media Studies said.

The film is available to Mason students through the library. According to Fuchs, Out in the Night features many different voices that were involved in the case, including one of the arresting officers, lawyers and activists who became involved during the appeals process.

“There’s some re-enactment footage, and then there’s some sort of surveillance footage from outside, on the theatre, outside of which the event occurred. And then some clever, I think, animation. They didn’t have access to the courtroom, so they had some animation showing sort of how the judge was ruling and how the prosecutors and defense lawyers were presenting the cases. Again, I think it’s a very good model for how you might put together a documentary that’s slightly unconventional as opposed to sort of more you know, Discovery Channel that we’re used to,” Fuchs said.

According to Chesler, Mason students have a special opportunity to advocate for issues they care about and Mason’s innovative atmosphere encourages students to do so.

“I think that we’re just very well positioned, we’re very close to D.C. and we’re also in this giant purple state and so whenever students come here, they reflect the diversity of this state as well as an international community and we’re just so privileged to be able to have this conversation across culture,” Chesler said.