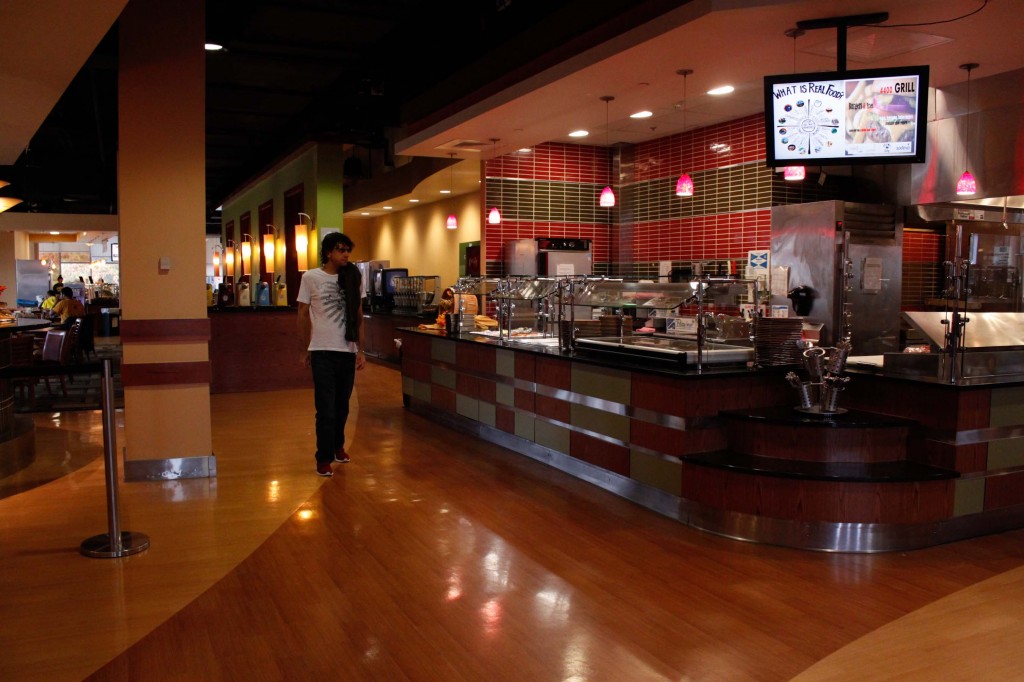 Mason dining halls are taking precaution for students with food allergies and intolerances.

The recent change in dining administration has brought some hope to what students can expect from their experience with student dining.

“We have administration that is willing to work with the students,” said Storm Pagila, head of the Student Government Dining Committee. “If they were to go in today rather than a few years ago, it would be a very different experience.  If they were to go in, they shouldn’t accept being handed off to a manager.”

Michel Wetli, Sodexo’s new General Manager at Mason, is pushing to identify and address any problems as early possible.

“There’s a whole form students fill out at registration, and if they have anything that’s flagged, they automatically go straight to the dietitian, who’ll walk them through the process and the stations,” Wetli said.

This form appears to be a recent addition to dining policy.

“In terms of allergies, I legitimately don’t remember any form regarding allergies, and mine are pretty severe,” student Jenna Gray said, describing her orientation several years ago. “I would have remembered having to meet with a dietitian. Instead I was told essentially to ‘be careful’ by a person at Southside.”

When Ryon Cummings signed up for the “Ultimate” meal plan in 2010, he was under the impression that while his Glucose-6-phosphate dehydrogenase deficiency may limit what he was able to eat, he would still be able to get by.

G6PD disorder rendered him unable to eat soy.  It is a hereditary condition in where the body doesn’t have enough G6PD, which helps red blood cells function normally.

His meal plan limited him to Southside where he thought there would be enough variety of choices in meals.  This quickly proved itself not to be the case.

“It didn’t matter how cautious I was. A day didn’t go by that I wasn’t sick,” Cummings said.

Cummings experiences various symptoms, “If I’m lucky, the consequences can be as small as my eyes flushing yellow.  If I’m not that lucky, that’s when things can go south very quickly.  Eating things I’m not supposed to, it kills my red blood cells.   What that means, if I’m eating things I’m not supposed to, I’m in a state of anemia. If anything else was to occur, and anything else that does isn’t really under my control, if I get sick in general, I could go in hemolytic shock and die,” Cummings said.

“I realized that the grill spray they used for anything that needed to be need to be non-stick was soy based, as was any oil used for frying,” Cummings said.

When Cummings learned that freshman were required to have the “Anytime” meal plan, given that it limits students to dining halls such as Southside and those that employ similar practices, he immediately voiced concern.

Cummings describes his condition as being “the most common enzyme disorder amongst man.”

While trying to meet with the dietitian, Cummings states that he was “passed off to someone who claimed to be the manager.”

During the process, he had brought up the possibility of warning labels.

“I wasn’t expecting them to stop using the oil,” Cummings said, “why would I, that’s a mass change.  I just wanted it labeled where one wouldn’t necessarily expect it. When you dunk the pasta is soy based oil after it’s already been finished being prepared, how am I supposed to guess that?”

Cummings’ concern was only compounded by the fact that the language barrier between himself and Southside employees made it difficult to find out what foods might contain or be contaminated by soy.

“To find out if they used soy frying oil, I had to ask the people cooking, and the first time, they didn’t even know,” Cummings said. “When I asked what type of oil they used, they didn’t understand the question.”

According to Cummings, the manager at the time told him that “for it to be significant enough to put a notice that it had soy content, it had to get to the point where it would be a government mandate, or he wouldn’t consider.  We’re only labeling the peanuts because it was this big government issue, and then added to his point that even peanut allergies were not that big an issue.”

Wetli is also aiming to have employees better able to identify what allergens a food may contain.

“We are broadening our scope as far as our allergy program goes, which is inclusive of training,” Wetli said.

In addition to early identification and consultation for problems, as well as making employees more well-versed on the subject, Wetli is pressing for more accommodations for be made for those with allergies and intolerances.

Wetli describes his project as being “an allergen free, gluten free cooler.  The idea is that it’ll be a table-top cooler, it will say allergen free, gluten free zone.  It will have a separate toaster, separate microwave.  We’ll have segregated items for example.  We’ll have other little thing in there, for example, something that may be prepackaged… so that they don’t have to worry about cross contamination.”

How Mason students use RateMyProfessors.com