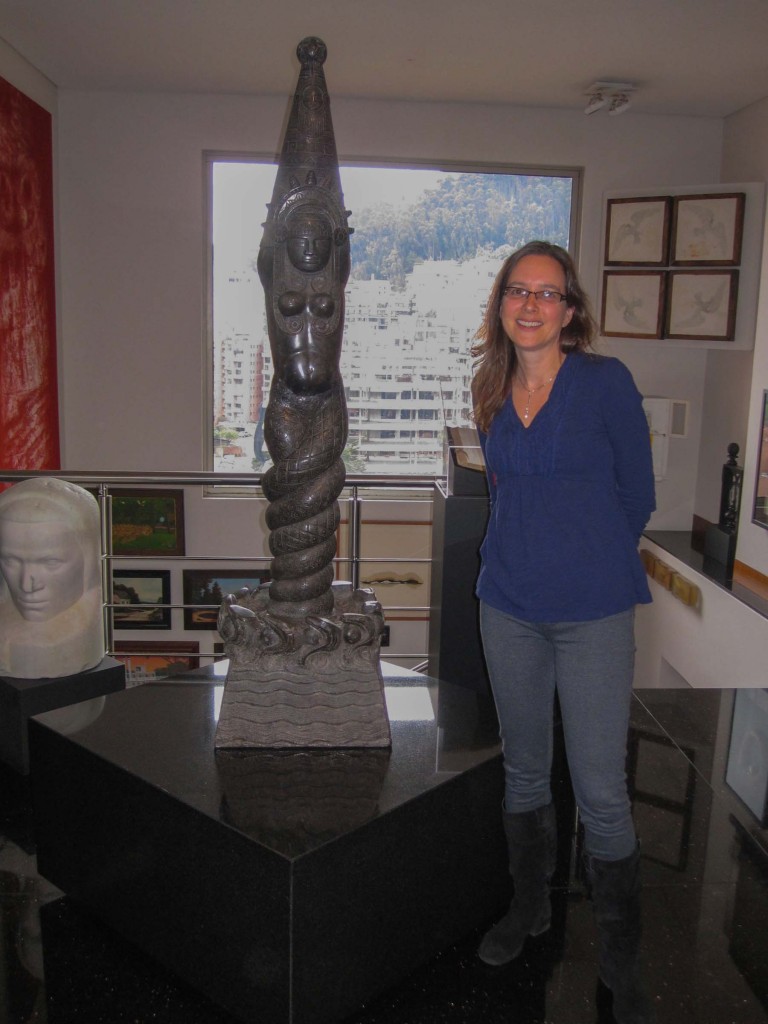 In an ideal world, Michele Greet, associate professor of art history at Mason, would curate her art exhibition with 125 pieces and tour it in five cities: three locations in the United States, one in Paris and one in Latin America.

Presently, Greet is finishing up the manuscript for her second book “Transatlantic Encounters: Latin American Artists in Paris between the World Wars,” and an exhibition based off of her research.

Greet’s interest in Latin American art goes back to when she was an undergraduate studying language at Bowdoin College in Maine who wanted to study abroad.

“I needed to go somewhere with a different cultural experience. The longest part of it is my grandmother is Peruvian, but the Spanish has been lost. She moved here as a five year old and she spoke Spanish, but my mom doesn’t speak it at all, so it was lost in my family,” Greet said. “So I thought it would be interesting to go back to Peru, but at the time it was not stable politically, so I decided to go to the country next door. I ended up going to Ecuador.”

In Ecuador, Greet discovered local artist Oswoldo Guayasamín. After learning more about Guayasamín  and his work, she realized she wanted to study Latin American art. Eventually, Greet would receive her Ph.D. in Modern Latin American art from the Institute of Fine Arts at New York University in 2004.

Greet began her current project in 2008 when she received a grant from the Phillips Collection in Washington, D.C. She has received two more grants since for her research.

“So the second project, for me it was to try to bring together my two interests. I have these two languages and I had a hunch that there were a lot of Latin American artists in Paris, in the early part of the 20th century, and I knew who some were, but I had no idea how extensive it was,” Greet said.

About a year ago, the American Federation of Arts in New York City approached Greet with the idea of turning her research into an exhibition.

The AFA is a non-profit organization founded in 1909 that organizes and creates touring art exhibitions. There are three curators within the company who perform the same work as a curator who works in a museum. More often, however, they invite a guest curator like Greet to realize an exhibition.

“I was really thinking that it would be wonderful to bring into the AFA program an exhibition that focused on Latin American art. I didn’t really have a specific idea of what that would be, I just started talking to people and researching and looking at what was going on,” said Margery King, curator of exhibitions at AFA. “One of the people who was working here, at the same time she was also a student the Institute of Fine Arts at New York University, which is the graduate school for art history. She said ‘oh I heard a wonderful talk by this person who is doing this work on Latin American artists between the two world wars.’”

King acts as the co-curator for Greet’s exhibition and works with the logistics of exhibition design, including the museum space, which art pieces they will be able to get on loan, and budgeting. Meanwhile, Greet focuses on the conceptual perspective of the exhibition.

Greet’s says her biggest job involved creating the checklist of all of the objects to include. The ideal checklist consists of 125 objects. However, it is more realistic that they will only be able to get between 110-115 pieces. Also, some pieces will have to be switched out with alternatives. Another task is organizing the pieces thematically.

“We have all of the categories of what the exhibition is going to look like. So it will have rooms of like Latin American artists working in cubist modes, or Latin American artists involved with surrealism. Then I have two sections, one on the kind of cosmopolitan, those who were not incorporating any kind of ethnic subject matter and then artists who were very much putting their ethnic identity as part of their work,” Greet said. “So I’m looking at those two poles, and as why did they choose to make those decisions to either be universal or national and why in Paris. We have one section on constructionism, bordering on abstraction. There are a lot of artists working in those sort of experimental formats in Paris.”

There are many challenges to creating an exhibition. This exhibition in particular is difficult because it is entirely an on-loan show, meaning pieces will be borrowed from private collectors and museum collections. The curators will have to negotiate with all of those parties that have one or more of the pieces.

Also, Greet does not always no where to find a piece. She searches through auction catalogs hoping to track down the current owner. Greet then submits an inquiry with the auction house, who will then forward it to the owner since the auction house cannot give away personal information.

Securing these loans may require Greet to travel to Buenos Aires, where there are several pieces she would like to include, and Cuba, since politics between the United States and Cuba are strained.

Greet’s work on her exhibition influences her work at Mason. Last spring she taught a class on exhibition curating.

“One of the reasons I took her class was because I’m interested in exhibitions that are coming in and out of museums. And we put together a proposal all throughout the semester for one of those exhibitions. She let us choose our own topic and pieces of art and let us dream a little,” said senior art history major, Madeline Cole, who took her class. “I got to learn what it takes to write a proposal, find pieces of art from certain lenders, prepare a budget and plan programs.”

For Cole, the experience was helpful when she interned at the National Portrait Gallery over the summer. Senior Shelley O’Conor, meanwhile, realized that she likely did not want to be a curator.

“You have to have a really strong idea, and you have to consider politics like identity, and gender. That is tricky to handle so [your exhibition] is politically correct,” O’Conor said.

According to O’Connor, in the case of Latin American art, the curator needs to be careful not to misrepresent Latin Americans. A curator should not show South American art as simply bright colors and tropical fruit.

“What I’m trying to show to is that they didn’t just paint, quaint Latin American subjects. They were involved in every single movement,” Greet said. “What I’m arguing in the exhibition as well that it’s not just one-way influence. These artists were contributing. They were part of the global circles in Paris. They were part of the conversations about modernism. Not just sucking up influence and copying what they saw, but they were really part of that circle.”

“With this one [exhibit], this one is special because it’s really a wonderful discovery and the work is so great. The story is really interesting, the work is really wonderful, a lot of it hasn’t been seen before in the U.S. And a lot of it many scholars who focus on Latin America are not necessarily familiar with. It’s very exciting in that way,” King said. “When we talk to people, when I’ve talked to fellow curators and other museum professionals about the show, people are very excited about it. They understand right away that this is something special, and it’s something that will really make a wonderful contribution to scholarship. But also in terms of seeing this great work, I think that’s what really makes this exhibition special.”