In 2012, Mason had 4,079 first-generation college students enrolled at the university, almost twice the number enrolled in 2008. The increase has prompted the creation of new organizations, such as MasonU, to meet the needs of this growing population.

Developed through the research of sophomore Shannon Toole, the new Registered Student Organization focuses on K-8 students, primarily first-generation students, who may not consider college as a possibility. 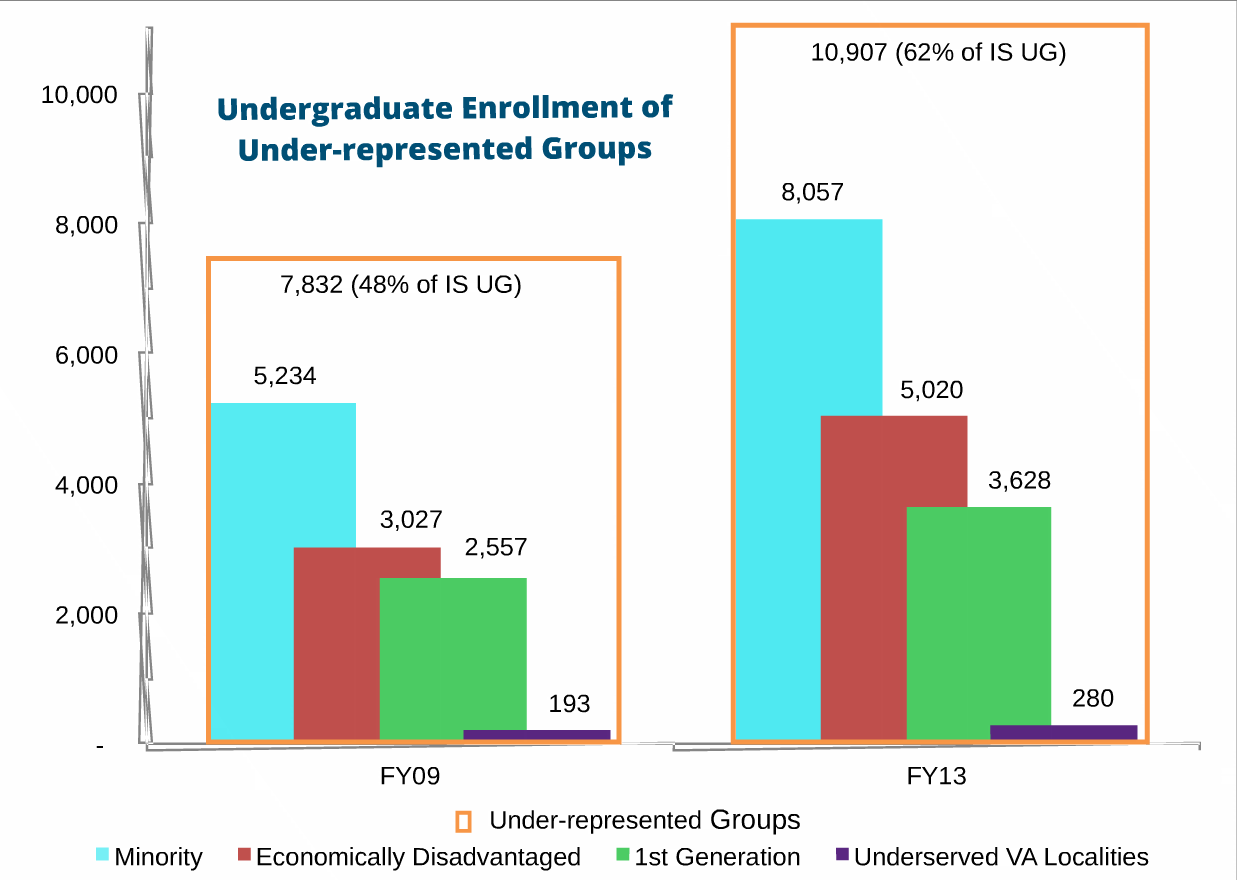 “We generally wanted to focus on first-generation college students,” said Elizabeth Moen, president of MasonU. “We wanted to give them an opportunity to see college in the same ways as some of their peers have who have parents and grandparents and relatives who have gone to college, and we wanted them to see that… it’s still accessible to you and you can get a great educa- tion in the area.”

The group reaches out to schools in the Northern Virginia area to target under-represented populations. Grace Zamorano, the faculty advisor for MasonU, said that the organization is inclusive to all groups.

“Early intervention in one way or another is really important for all under-represented students,” Zamorano said. “We look a lot at primarily fi rst-generation, ethnic minority populations, but also some other areas like girls in STEM because they are also under-represented.”

Results from Toole’s research project, funded by the Office of Student Scholarship, Creative Activities and Research, emphasized the point that early intervention was key to increasing attendance.

“They don’t necessarily see that college is accessible,” Moen said. “They don’t necessarily have a role model… and something else might have grabbed their attention already if it’s not college. If we don’t say in fi fth or sixth grade this is college, this is an option for you, it might turn into a less-constructive form of channeling their energies.”

“We hope we can get them excited enough that they’ll take the extra initiative to work with the counselors,” Zamorano said. “Schools in this area are very strong…but a student has to take some level of initiative so they walk into that college counselor’s office and be persistent about applying to scholarships or to universities. That’s going to take some innate drive and what we want to do is try to create that innate excitement at an early stage so that it’s even in their realm of possibility.”

In addition to a campus tour, each MasonU session provides a residence hall tour and an academic activity. Zamorano said those additional aspects generate the most excitement among K-8 students and make the program unique.

“There is no program that does something like this,” Zamorano said. “A bunch of campuses in the area, including Mason, provide tours to K-8 students, but there’s not that extra element of really showing them what it’s like to be a college student… we saw there was a real need for this type of really engaging activity on campus.”

At the other end of the spectrum, the Student Transition Empowerment Program supports first-generation students who have enrolled in the university. STEP participants attend a summer academy before their freshman year that includes workshops, seminars and college classes. Students are also given a faculty and upperclassman mentor, take a University 100 class in the fall and have regular meetings throughout college with a STEP staff member.

“Higher education [research is] basically saying first-generation students are here and more are coming,” Brown said. “The Department of Education estimates that almost one third of the national college population is fi rst-generation with the expectation for that to rise. The reality is that colleges need to be prepared for that.”

According to Brown, the Office of Admissions placed a check box on applications for the fi rst time last semester for students to self-identify themselves as first-generation. The measure will allow the school to track students who could benefi t from programs like STEP.

“My anticipation is that there’s going to be a dramatic increase [of STEP applicants] this year,” Brown said. “I think the reason for that is because now we can target those fi rst-generations students.”

Additional initiatives include a first-generation Living Learning Community and First Generation Mason, a new RSO, which will be available starting in the fall semester.

“If you look at the NOVA area where Mason is located, [it’s] very immigrant heavy [and] from all over the world,” Zamorano said. “From Africa, from LA, from eastern Europe – you have all kinds of diversity here.”

In a recent article published by Diverse Magazine, Marybeth Gasman, head of the Center for Minority Serving Institutions at the University of Pennsylvania, said many first-generation students are also children of immigrants. The Higher Education Research Institute located at the University of California, Los Angeles published a study that stated, “[N]on-citizens immediately [place] after Hispanics as the group most likely to be fi rst-generation college students.”

Bobbi Bowman, former diversity director for the American Society of News Editors and city editor for The Washington Post, said this information means Virginia is trending toward becoming a minority-majority state which will dramatically change cultural relations. She said “covering the ‘next’ Virginia [is] the best story of twenty-fi rst century America.”

Brown said the university is preparing for the expected influx of students.

“We have to go beyond marketing [diversity] and do some real community building on campus, Brown said. “Identity is going to get complicated; it’s going to get messy, which I think is good. We’re moving toward a campus that’s diverse in even more ways.”