In 2006, George Mason University became the first Colonial Athletic Association team to reach the Final Four. And in 2013, the men’s basketball team is determined to pull off the ultimate fairy-tale ending – making it back to the NCAA tournament in a depleted CAA conference.

Forgoing the recent do-si-do of conference realignment, Mason is staying put in the CAA – and keeping its eyes on the Big Dance.

Virginia Commonwealth University is gone. Old Dominion University has one foot out the door. So, there’s speculation among fans that the CAA will be viewed as a weaker conference come Selection Sunday in March. However, the potential impact these changes will have on the CAA, and Mason in particular, has yet to be played out on the court.

“The proof will be in the future,” said Mason athletic director Tom O’Connor, who served on the NCAA Division I Men’s Basketball Selection Committee from 2004-09. “[You] have to give it one more year, though, to really see. But I think that 90 percent of the questions are going to be answered this year.”

In 2011, the CAA received two at-large bids into the NCAA tournament in addition to the automatic entry received by the winner of the conference tournament. In 2013, the CAA conference could be a one-bid league.

Despite the uncertainty, Mason is taking the necessary steps to ensure success – a stronger non-conference schedule going into the upcoming season. 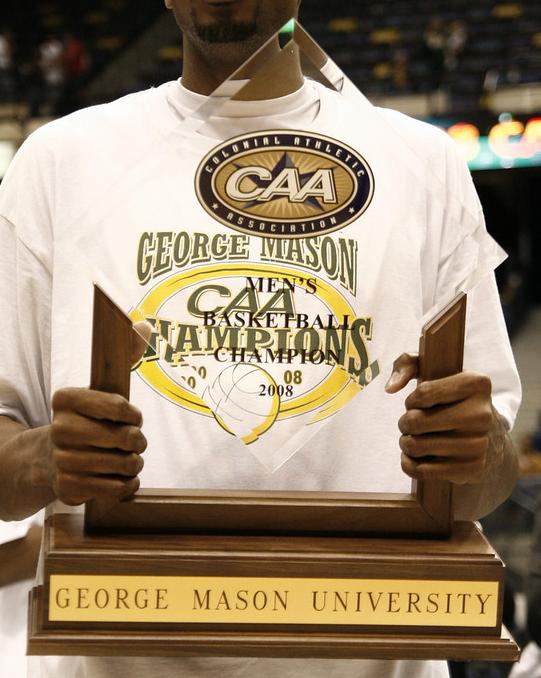 large bid into the NCAA tournament, including conference record, non-conference strength of schedule (SOS) and Ratings Percentage Index (RPI). A common misconception lies with the spotlight being placed solely on the RPI – which is actually used as a starting point when analyzing the teams during the selection process. With the attention placed on this statistic alone, O’Connor emphasizes the importance of the non-conference strength of schedule and the role it plays when determining which teams receive the at-large bids into the NCAA tournament.

“The one thing the public doesn’t understand is it’s your schedule against your opponent, but also involved in that, is your opponent’s opponent,” said O’Connor.

“If we deserve that at-large, we’re going to be a better rated team. So, we could get a higher seed than the team that actually won the tournament,” said O’Connor. “It’s not automatic that the winner of the [conference] tournament gets the higher seed. Because if you did that, you’d be placing it all on one game. And it has to be a body of work.”

In order to prepare for the strengthened schedule, the team is staying focused on what they need to do – win games.

As far as conference realignment is concerned, Copes isn’t worried. For Copes, representing Mason within a smaller CAA conference provides the motivation to make a bigger name for the school on an individual level, as well as for the team as a whole. However, the loss of rival VCU to the A-10 was a disappointment for the Patriots’s big man.

“Actually, I was kind of mad when VCU left [the CAA conference] because they beat us twice last year. Whenever there’s movement, it affects the school – because we reflect the school. We go out there with George Mason on our chest,” said Copes.

Many factors went into Copes’ decision to come to Mason, but the size and fame of the conference that the school represents were non-factors in his final choice. Mason assistant coach and Copes’ uncle, Roland Houston, was added to Hewitt’s coaching staff when he was hired in May 2011. Before moving to Mason, Houston was an assistant at George Washington University and had been influential in recruiting his nephew to play for the Colonials. Instead of going to GW, Copes decommitted from the A-10 conference school and chose Mason, providing an opportunity to gain experience with solid play in his first year.

“We have to win a lot of these non-conference games to get an at-large bid,” said Copes. “[But] this schedule proves a lot. Say, if we do beat all these teams – we might be top 25 in the country.”

No matter the changes to the conference or who is slated on the schedule, making a NCAA tournament berth boils down to winning games and building a respectable resume—plain and simple.

“I know for a fact that the institutions that we have in the CAA are committed to basketball and they’re committed to rising their schedule,” said O’Connor. “And we have always said that. So we want to do that, too.”