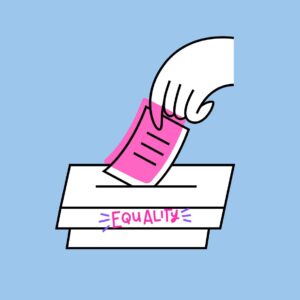 The importance of women’s rights.

Some of the most important voting issues to us as women are the right to an abortion, along with longer-term maternity leave, a focus on gender (and race) based violence, and to get rid of the wage gap and “pink tax” explained junior Holly Royhab.

Emily Lewantowicz a senior, worked for Rep. Elaine Lauria’s campaign’s financial and fundraising team. When asked about the Dobbs decision’s potential impact on voters in this election, she says that it is “important to note that decision [Dobbs], you know how the news cycle works, it spikes and it comes back down, so having all that attention on Roe being overturned in the summer was massive for the campaign and for Democrats…but now with the headlines being about inflation and the economy and impending recession how that is going to impact voters.”

Lewantowicz cites a New York Times poll on abortion in July, where abortion was voters’ #1 issue. The number of voters that said abortion was their top issue in the midterms dropped 14 points in two months; inflation/economy knocked abortion out of the #1 spot.

Young voters like Royhab discuss why she values being old enough to cast her ballot this year. She says, “I vote because there was a time when I wouldn’t have been able to, and despite making massive strides towards equality since then, there’s still a long way to go, and every vote has an impact despite being small. If everyone who voted had the idea of “why vote, it doesn’t do anything?” nothing would ever progress.”

Voting holds a metaphorical microphone to the issues at large in society. Although the power lies in the hands of the candidate elected, the importance of voting and having that choice matters.

“Since the 2016 election, I admit that I’ve become somewhat of a cynic when it comes to voting. In any case, I’ve realized that politicians can say whatever they want and highlight ‘hot issues’ as much as they please, but their character and integrity are what really matter in the end. The most important aspect of voting that aligns with my gender is the character of the candidate” explained junior Mariam Shakif.

Shakif continued to further explain how this impacted her past experience with presidential candidates such as former President Donald Trump.  “ I refuse to see another disrespectful, cruel man take office after openly bragging about sexual assault and harassment. Now, I really try to judge candidates based on who they are, which is much more obvious than they might think. I look for a candidate that doesn’t scapegoat, doesn’t use women’s issues as a poster child for their campaign, and actually listens to public opinion”.

Past candidates have reaffirmed the belief of women needing to vote for gender equality. For their issues to be seen and heard from a political standpoint and on a broad spectrum society.

“The overturning of Roe vs. Wade was such a drastic decision and I know that future elections will demand a lot more from political candidates concerning women’s issues. I feel like women’s rights were previously used as a flashy issue to try to gain a political following, but now people are going to be a lot more expectant when it comes to fighting for women’s rights. Essentially, people are going to force politicians to actually uphold their promises rather than expect them to forget about women’s issues” said Shakif.

The gender-based issues have caused strife among women in society who have banned together to ensure their rights be taken seriously by political candidates or else their vote will go to someone else.

LETTER TO THE EDITOR: ON MENTAL ILLNESS, WE SHOULD RETHINK OUR REPORTING