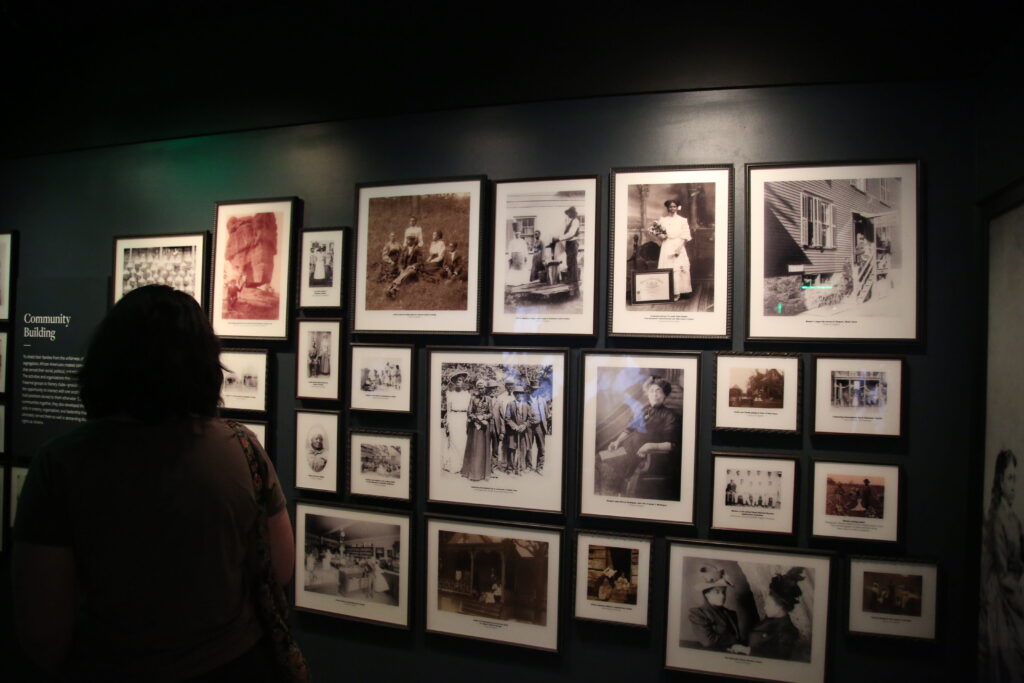 My friend and I scored a free guided tour by a docent named Frank McDermott. McDermott is a nice man who knew a lot about the museum. I first met him when I was giving tours of Horizon Hall this past summer.

McDermott showed us to the lower level which contained three unique history galleries. In order to get down to the galleries, one had the option to take the stairs or take the elevator which quite literally traveled through time. The elevator listed with various dates started with “today” and then as we moved lower and lower into the galleries it stopped at “1400”.

Each history gallery was jammed packed with facts and contained multiple visual elements to keep guests engaged. Some of the elements included video, compelling voice recording, or the Explore More Stations. These creative innovative elements were very similar to those used at the Artechouse which aims to keep guests engage while educating them on topics.

Throughout the museum, you will see both small and big artifacts used to help tell the history of African Americans. What surprised me the most was how the Jim Crow Railroad Car was brought into the museum through a very large crane.  I gasped because my friend and I had both assumed that it was not the real artifact but a replica. It was in such good condition and even allowed visitors to walk through it.

Walking through the Jim Crow Railroad Car, there was a voice recording being played. It was a black mother explaining to her daughter that they wouldn’t have access to the food they would need to eat the snacks she brought. Food was only accessible to white folks. To see signs “colored” and “white” I was getting goosebumps. I couldn’t even imagine sitting in a seat based on the color of my skin and then getting treated better or worse due to that. It was unfair.

Allowing guests to walk through the Jim Crow Railroad Car highlighted the segregation and treatment of African Americans during this time. After the railroad car exhibit, there was Emmett Till exhibit. This exhibit was strictly no photos due to its graphic nature.

Originally heading into this exhibit I had read a lot about Emmett Till and even watch a few documentaries. As I began to read and process all the horrifying facts of Emmett Till’s murder I realized what big chunks of information had been left out of my history book. One fact that stuck with me was the fact that a heavy cotton gin fan was tied around his neck with barbed wire. It was horrifying and he was only 14.

The coffin in the Emmet Till exhibition was real and depicted a picture of Emmet Till’s beaten and tortured body. On the wall adjacent to the coffin a few brief articles talked about the strength of Mamie Till to share her son with the world. It was very emotional and brought tears to my eyes. Emmet Till’s death was a catalyst for the African American community to push back and start fighting for their rights.

Before walking up to the next floor we saw a photo gallery of important African American figures which were put into this light box and really aimed to capture the essence of that figure. It was also included on the top floor as well.

The top floor exhibits discussed a lot of important figures who have helped the African American Museum such as Barack Obama and Oprah Winfrey. It talked about the importance of organizations like Black Lives Matter (BLM) and the impact they create on society.  I was able to identify similar patterns in past and current times of police violence, as well as the issue of certain laws that prejudice African Americans.

Overall, the History Galleries taught me a lot about the strength, endurance, and perseverance that has been ingrained into African American communities. It taught me about the need and constant hunger for equality in not only the United States but worldwide.