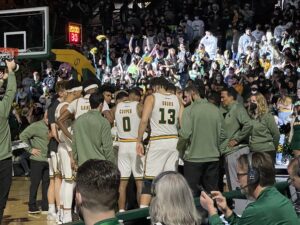 Atlantic 10 Basketball set the tone for homecoming weekend with VCU Rams (17-7), got the upper hand against the Mason Patriots (13-11) which resulted in an upset with a final score of 85-70, in the Rams favor.

Sophomore Adrian Baldwin and senior Vince Williams of the Rams tied in scoring a total of 18 points, in addition to junior Josh Oduro of the Patriots who also led his team in scoring putting up 18 points. This however was not enough for the 6 feet 9 inch forward as he explained there were missing aspects of his game he was not able to fulfill, such as “being a better leader.”

“They were the tougher team today, and they had a pretty good game,” Oduro said. “We had to be better and that starts with me, I have to be a better leader and take ownership, and lead by example.”

HOW THEY DID IT

VCU Rams head coach, Mike Rhoades, who guided his players on a 6-1 win streak explained how he believes the Rams will keep the momentum for all the previous wins. He suggested that executing well offensively and defensively is his team’s philosophy.

“The best thing to take momentum in the next game is to take it from the last game,” coach Rhoads said. With our execution this late in the season, those are our emphasis. But keeping the tank full, not wearing them out so they’re ready to go like they were today.”

Coach Rhoades also noted that brushing up on little things, and doing them well at the end of the season is what takes a team so far. Owning the day, taking control of the day, and helping your teammates is what will help win the next game.

Coach English of George Mason plans to answer for the upcoming week and broke down what changes the Patriots have to make playing on both ends. He suggested that you have to play well and know how to execute offensively and defensively.

“I’m just worried about our defense,” coach English said. “We were fine with a lot of their players shooting from the outside and the guys that we said we don’t care if we shoot from the outside, we’re still getting layups. That’s a problem.”

Homecoming is arguably the most exciting time at Mason featuring tailgates, and more. According to Mason Athletics this game had the highest attendance with 6,333 spectators. The Mason men’s basketball team is the most anticipated event of homecoming weekend. Though the Patriots came up short, this group of talented individuals gave it their all until the very end.

The Patriots will face off against Fordham University, Sunday, Feb. 20th and will run it back against the Rams at Stuart C. Siegel Center Wednesday, Feb. 23rd.

PATRIOT PANTRY IS ACCEPTING ORDERS FOR THE SPRING SEMESTER

THE CASE FOR A LARGER PRAYER SPACE AT MASON