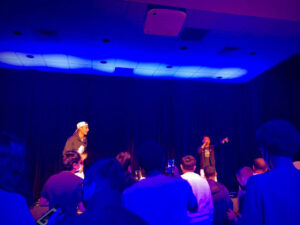 Walking into the doors of Dewberry Hall at 6:00 pm on Jan 28., what is normally an empty ballroom space was transformed into a safe space for all to gather and learn about the cultural diversity that is within Mason.

Booths lined up against both sides of the room leading up to the main stage, each booth highlighting a cultural organization, such as the Spanish Hispanic Association and African Student Association, where students of the culture and allies could learn more about (and have the opportunity to join) the organizations. Along with the booths, dinner was provided, featuring dishes from around the world.

As the night was getting started and the audience started taking their seats, Jaelin Mitchell, the emcee and “master of the ceremony”, kicked off the event with a powerful voice, performing the song “Lift Every Voice And Sing” with his equally talented friend Eliyahu Young. Maya Champion followed them, singing Meghan Trainor’s hit song “Me Too.” The duo Steph Cody and ZZZBOW followed it up, performing their own mashup of original songs including “Round & Round”, “FUEGO” and “Multiverse”.

With each stellar performance, the crowd cheered as they waited for the next performer. In between acts, Jaelin Mitchell took back the stage to introduce and feature some of the different booths at the event, including the Native American and Indigenous Alliance (NAIA).

“Getting our culture out there, making a difference, making sure people are informed about our culture, our history, it was nice having an event that people were able to come to and learn more about us,” said Lopez-Perez.

Along with his appreciation, Lopez-Peres mentioned, “[NAIA] has allies, has people that vaguely know their ancestry, and it has people from all over the indigenous world.” He encourages those who are interested to join. “It is really nice to have everyone share this common interest and passion in promoting Native American and Indigenous culture and to learn and grow,” he said.

In part with NAIA, Sara Jefferson, a member of the Chickahominy tribe, located right outside of Richmond, VA., performed a dance that promoted healing with her jingle dress regalia, in which she showcased her culture. 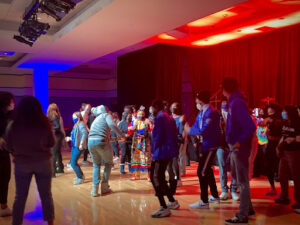 As the night carried on, performers on the stage continued to showcase themselves through their talents, such as Alfred Jones, an engineering student at Mason who performed Rodeo Clown on acoustic guitar, their culture, with Ravan performing central Asian folk music, and their organizations, with the National Panhellenic Council showcasing steps from the fraternities and sororities on campus.

By the end of the night, as everyone danced and celebrated one another together, Mason in Color became more than just a night of performances — it became a night that honored the unity between students at Mason.