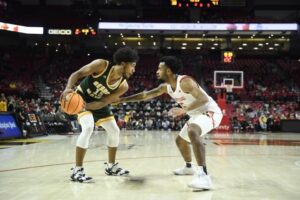 Fairfax, VA – Mason men’s basketball sealed an astonishing win at the Xfinity Center against the Maryland Terps, tallying a record of 4-0 under new head coach Kim English and marking the start of what many are referring to as the “English Era.”

According to ESPN, this was Mason’s first win against a ranked opponent since 2007. During the teams’ first meeting in November of 1985, they tallied a thin loss — finishing with a final score of 81-80.

“We knew it would be a dog fight but our guys played with poise and unbelievable confidence,” Schwartz explained. “The career high came as a result of just wanting to win. Some games call for different approaches but I knew I would have to assert myself to keep us going on the offensive end. On defense we played with toughness and battled against a good team.”

The Texas native has many goals for after college, such as playing for the NBA or overseas. Schwartz additionally wants to become a music producer.

“From a physical standpoint we have bigger, longer, more athletic guys,” assistant coach Duane Simpkins said. “I think from a defensive standpoint, we have more of an identity I believe of who we are. We’re going to be a defensive team, first, second and third. Obviously we’re going to do things offensively but we have to have a firm understanding that the success for offense is going to be predicated on the success of our defense.”

“Oh, it’s amazing. And I think we’re starting to build a new culture here for George Mason athletics. And, I think this is just the beginning of it all,” junior forward Josh Oduro said.

With this being his seventh year working for the program, Simpkins noticed much improvement with the franchise itself — but emphasized there are areas which need more focus on for improvement.

“I think there’s more of a an intentionality to PR, I’ve had so many people comment positively about our media content and the presence of it,” Simpkin explained.

He added, “I think that goes well for your fan base and getting your community engaged and enthusiastic about the season, about your program. It’s great for our student athletes because it provides an opportunity to see who they are not just on the court, but also have much more of a personal connection with them off the court.”

Simpkins has mentored quite a few All A-10 players: Marquise Moore, Justin Kier, AJ Wilson, and Otis Livingston Jr.

“All those guys were tremendous people. You tell them things you need to work on, all of them respond differently but none of them were in a disrespectful manner or anything, and anytime you have that as a coach you can work with that,” Simpkins noted.

The Patriots face off against James Madison at the Atlantic Union Bank Center on Friday Nov. 19 at 7 p.m.