Flashing lights of green filled the stands as the crowds roared in anticipation for the annual Mason Madness event on Friday, Oct. 15. Cancelled in 2020 due to the COVID-19 pandemic, the official kick-off to basketball season was finally back.

Setting the tone of the event were stellar performances from the Masonettes, the dance team of the Mason Athletic Department, followed by Mason’s first and only shake dance team, Lights Out!, and finally Phi Beta Sigma Fraternity. Throughout the performances, bouts of cheers and applause came from the audience as they watched with excitement over each step and move from the dancers. 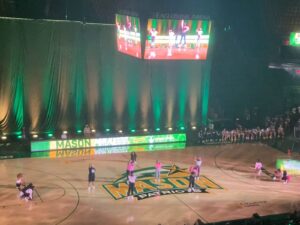 Yenelis Jones, a freshman member of Lights Out!, said her experience being on the court performing for Mason Madness was definitely at the top of best experiences while being at Mason. Jones mentioned that she is involved with several other organizations on campus, but admitted that “this one was definitely memorable.”

“It was so exciting to be back in here! Not just to be able to play in the arena, but to have fans back, because it’s been so long. And the energy was so … just exciting,” Blair-Lewis said.

As the women’s team cleared the court, Urbanknowlogy 101, the university’s first hip-hop dance team, offered another outstanding performance. Following the performance, the lights began to dim and the fog rose again.

The men’s basketball team contained players coming from hometowns as nearby as Sterling, Va. with number 4, Sam Shelton, and as far away as Canberra, Australia with number 24, Blake Jones. Similar to the women’s team, the players for the men’s team showed off the plays and moves that they have been practicing so far before the start of the season through practice drills and a scrimmage.

A notable move during the scrimmage was from player number 15, D’Shawn Schwartz. Making a 3-pointer that caused the crowd to erupt in cheers as Green Machine shouted “Oh” to the song “Seven Nations Army” in the background.

As the night concluded, Kim English, the head coach of the men’s basketball team, thanked everyone for their support and coming to Mason Madness. English also told the audience that his staff and himself “couldn’t be more appreciative of all you have done for us and we are incredibly excited about the basketball season.”

“We’re getting the team back to where it was, this year,” English said.