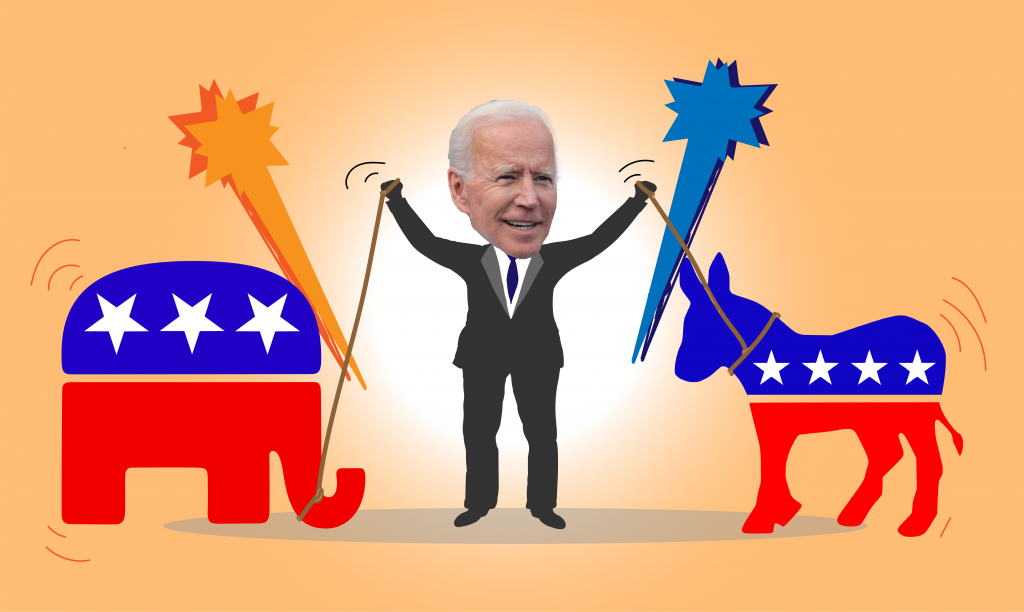 It’s time to build back better.

Afforded unified government for the first time since 2009, Democrats must do what they couldn’t during the Obama years: Secure what Senator Elizabeth Warren dubbed “big structural change.” This project entails massive domestic investment and redistribution.

But the actual mandate given to the Democrats is less sweeping. While Americans rejected the chaos of the Trump presidency, they were ambivalent on the Democrats’ proposed economic project. Some apparently voted for Biden while voting Republican down ballot, and more voters still trust Republicans on the economy — only after months of a bungled COVID-19 response did a plurality of voters indicate they trusted Biden more than Trump on the economy.

Whereas the mandate for the Biden administration is essentially for competence and turning down the temperature, the measures necessary to address our myriad crises need to be much more radical. This puts the Democrats in a precarious position, and how they navigate the elusive ideal of “bipartisanship” is the central challenge of the next two years.

A fifty-percent-plus-one “ram-through” mentality can easily lead to voters punishing the party at the next election. Democrats cannot afford to repeat the politics of TARP and the Affordable Care Act, which eventually led to the Tea Party backlash which cost them unified government and control of dozens of state houses. With even slimmer majorities this time around, such an approach by Democrats would almost certainly provoke an electoral reckoning that would result in a redux of Obama-era deadlock.

If the Biden administration is too liberal with concessions, however, this country’s slow-motion institutional collapse wrought by cronyism and extreme inequality will only continue — and an angrier and more organized left will emerge, exacerbating the country’s divides.

The first test is COVID-19 relief. Democrats have the votes to pass the $1.9 trillion Biden plan through reconciliation, which requires only a simple majority. However, 10 GOP senators have proposed a much slimmer $618 billion relief plan, with more targeted payments and no aid to state and local governments, that may be able to pass with bipartisan support. Biden is faced with a choice: opening the next four years with a bold spending package that can only pass on party lines, or with a very imperfect compromise.

The nature of the situation actually puts the Biden administration in a very strong political position. Whereas other necessary reforms, such as a public insurance option and a climate change plan, can be reversed or dismantled as the political winds change, a spending package such as this is largely one-and-done — a clean legislative victory here does not require bipartisan consensus.

Additionally, checks are a popular and highly visible form of aid. The Tea Party-ers were able to campaign on skyrocketing deficits that voters associated with a sluggish economy and some combination of corporate bailouts, being “in debt to China” and government excess. Debt-clock talk won’t resonate as much as it did after the financial crisis if we have a stronger recovery (as is projected) and people see that money in their own mailboxes.

When it comes to COVID-19 relief, Republicans stand to lose. This makes it tempting for the Biden administration to use its governing trifecta.

However, timing and symbolism are the factors that ought to steady the administration’s hand when it comes to COVID-19 relief. This measure will begin their relationship with the Senate GOP, many of whom have a sincere desire to move their party in a more moderate direction.

Though the proposed GOP relief plan is unnecessarily stingy when it comes to state and local support, among other things, it would be prudent for Biden to put moderate Senate Republicans in a strong position. Bringing them to the table for COVID-19 relief and allowing them to have a small bipartisan victory could do that. Marginalizing them in any relief measures will only give more credulity to the hardliners and firebrands.

Biden should give moderate Republicans an opportunity to signal what they do support, and he should support the passage of a leaner bipartisan package focused on the consensus measures. Forcing moderate Republicans to vote against a larger package because of provisions like a $15 minimum wage and healthcare subsidies – when they may in fact support spending on vaccine distribution and school reopening – is the kind of politics that have gotten us to this level of dysfunction. Our leaders need better opportunities to indicate what they stand for, and voters need clearer opportunities to evaluate them.

But Democrats shouldn’t skimp on what they believe needs to be done. There is no need to drop the other spending measures — they can be passed quickly, separately and along partisan lines, and the same Republicans who voted for the bipartisan package can go on the record opposing them.

If they want to vote against an expanded child tax credit and increased minimum wage, Democrats should let them — and use it against them when elections roll around. This approach has opportunities for more honest political craft.

While falling far short of any dreams of healthy bipartisanship, this transparent approach to legislating is perhaps a baby step in the right direction towards a more functional Congress.

The next political battles won’t put the Biden administration in as strong a position as COVID-19 relief. This package will be the easiest bill to pass without consensus and the least likely to invite punishment at the ballot box in two years. But this is the one that will set the tone and relationship for the rest of this Congress.

Cut the package up to let the public know what passed with bipartisan support and what passed along party lines. President Biden should use his political capital to start this era of reconstruction with an embrace rather than an opening shot.