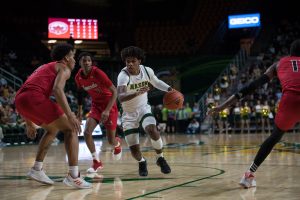 On April 8, Washington Post reporter Steven Goff announced in a tweet that the NCAA had granted Kier a fifth year of eligibility after he missed all but nine games this season with an injury. In the same tweet, Goff announced that Kier was entering the transfer portal.

Since then Kier has gone from a Top 10 list of schools to a Top 3.

ESPN’s Jeff Borzello said in a tweet Thursday that Kier would announce his decision on Sunday and that Georgia, Minnesota and NC State were his final three.

Kier eliminated Mason from his Top 8 on April 21, as reported in a tweet by Jake Weingarten.

The Virginia native took to Twitter to address the Mason community.

“This was a hard one but I just wanted to say THANK YOU to @GeorgeMasonU and a bigger thank you to @MasonMBB for believing in a scrawny kid from Grottoes, VA,” Kier said. “My four years with you guys were so special to me and the city of Fairfax will always have a place in my heart!”

He continued, “Again, I want to thank my brothers, [M]ason nation, my professors, the community, and everyone who supported me throughout my journey at Mason. I have nothing but love for every single one of you. I will forever have a love for the green and gold”

Prior to his senior season in 2019-20, Kier sustained a foot fracture in September and missed the first section of the season. Later in the season, Kier returned to the court and played in only nine games in 2019-20, before reinjuring the foot and missing the remainder of the season to recover from surgery. Kier averaged 9.6 points and shot 46 percent in his nine games as a senior.

Kier told Fourth Estate back on March 2 that “Ever since I was little, I just felt like everything that I did was to try to be the best. And as you see in anything competitive you watch, in sports or even in anything in school, your goal is to be in that number one spot.”

The Patriots have failed to finish in the top four of the Atlantic 10 Conference every year since they switched from the Colonial Athletic Association and have not made either the NIT or NCAA Tournament since 2009 and 2011, respectively.

On Sunday, Kier announced on Instagram and Twitter that he would be transferring to the University of Georgia.

Farewell Letter from the Sports Editor