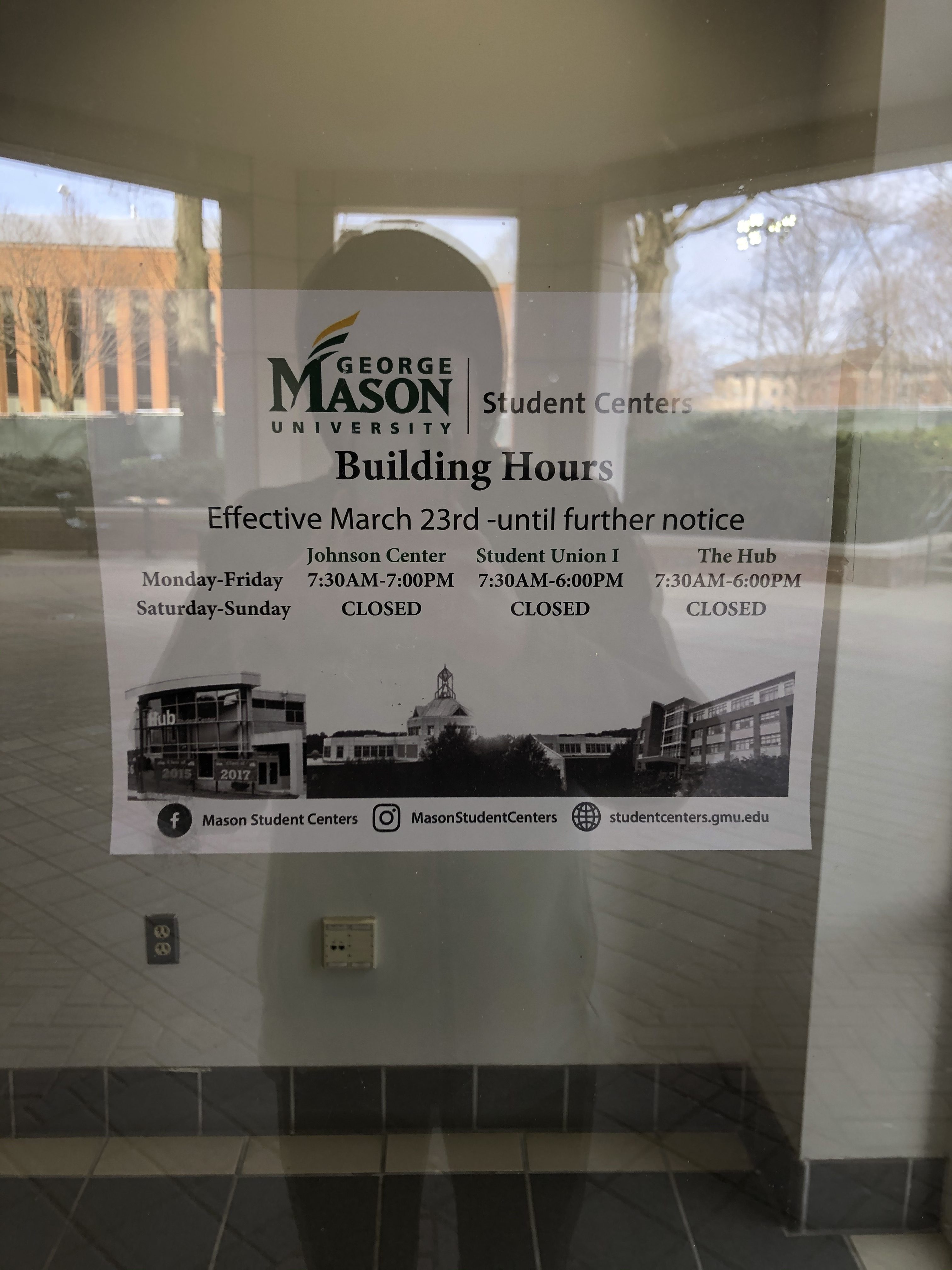 For the rest of this semester, the Mason campus will be devoid of any students rushing to class or meeting up at dining halls. Instead, students will be home — likely in their sweatpants — taking their classes online. On March 16, Mason joined several other universities across the country taking precautionary measures to prevent the spread of COVID-19 by transitioning to online instruction.

The news arrived to the Mason community during spring break amidst a storm of media coverage on the spread of COVID-19 in Europe and across the U.S. Doctors and politicians urged people to stay home and refrain from spending time in close proximity with others. College life is seemingly defined by spending time in close proximity with other people, so universities, including Mason, began to ask their students to go home and not return to campus for the rest of the academic year.

These are uncertain times as many classes are trying to figure out how to transition to online instruction. Classes that depend on in-person labs are even less equipped for the transition, leaving many students worried about how courses will progress and many teachers trying their hardest to ensure a smooth transition.

“I’m a little conflicted about the transition right now. I’m not sure how this is going to work as an engineering student,” said Grace Morrissey, a sophomore civil engineering student. “Three of my classes are all math-based and one of them is a lab. I’ve heard back from two of my professors so far and it seems like they’ve got the transition down well, but I’m still not sure how the lab is going to work.”

Many professors will be utilizing the Cisco Webex video conferencing system to hold lectures as regularly scheduled, but Morrissey is worried about the time differences.

“I know one of my classes is [doing] live lectures at the class’s usual time. For this specific class, it doesn’t bother me that much [but] I have three 7:30 a.m. mornings and I’m worried those classes are going to do the same type of thing with the live lectures at that time,” she said. “It makes a lot of sense, but I’m back home in [Los Angeles] right now so that would be 4:30 a.m. in the morning for me and I’m not sure how I feel about that. It’s super early.”

Besides the shift to online classes, student life was also interrupted. As everyone went home, friends and roommates were separated indefinitely.

“I feel really bummed; this transition was definitely the right call considering the current situation, but everyone is getting robbed of so many potential experiences and it sucks knowing there’s no way around it,” said Jack Parker, a sophomore history major. “Leaving for spring break, I never would’ve thought that’d be the last time I saw my suitemates for the whole school year, and it just won’t be the same going through the semester without them.”

Students who are graduating this spring or winter also raised many concerns about how this change would impact their future plans. So far, Mason has postponed commencement indefinitely and has offered a few 1-credit courses for those who need it.

“Not having an official commencement as of now is probably the most disheartening,” said senior information systems and operations management student Tyler Tep. “Because I’ve done online classes throughout my time at Mason, it’s not that big of a deal. It’s more the fact that I won’t be on campus at the facilities walking around engaging with my peers. That’s probably the most unfortunate.”

There is also substantial student support for Mason to grade all courses with a pass/fail system for the semester. In fact, a change.org petition for Mason to implement this grading system was circulated on the Facebook GMU Generalposting page.

Mason has responded to a few concerns from students regarding access to housing, internet and income by setting up an emergency assistance fund. The money is for students in need of short-term financial assistance and covers expenses such as technology needed for online instruction, medical expenses, travel costs and sudden loss of housing, according to the University Life website.

“It is an understatement to say that we are living in extraordinary times,” said Interim President Anne Holton in an email to the Mason community. “When the academic year began, few of us could have imagined that we would be preparing to finish the spring semester teaching our courses online. This is a new reality for all of us, and while we might not have planned on this path, we are taking it and stepping boldly into this new frontier.”