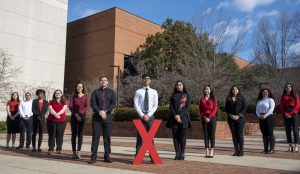 Can you talk a little about TEDxGeorgeMasonU and what you do?

So, TEDxGeorgeMasonU is an organization that is a club, technically, that is committed to the [parent organization] which is TED globally. And we are TEDx, which means we are an independently organized TED talk conference. What our job is is to bring the spirit of TED wherever we go, so that it’s here at George Mason University.

We’re planning to have our next conference March 31, which is coming up soon. And the whole purpose is to bring about ideas from our local community and give it to our local platform: to students, [Northern Virginia], Fairfax people.

Can you talk a little bit more about the conference?

Yes, definitely. We’re going to be having a good mix of some live speakers: faculty, students even — anybody who basically feels they have an idea that provides a solution for our local community problems. That’s who we want to bring to light. Anybody who feels like they don’t have a platform to share their ideas, like, ‘I have a revolutionary idea. I have a groundbreaking idea.’ That’s what we’re there for.

Do they submit their ideas through the organization?

Yes. So we will be having applications go out really soon where you can apply for student speakers. We have a short interview process. There’s a quick video that you need to submit, and if we feel like the idea is unique enough and it substantiates, then, well, you’re in. It doesn’t take too much to get into a TED talk.

What’s the most influential TED talk that you’ve seen personally?

I can give like two answers to this. The simple, most impactful one that I’ve seen is this four-minute TED talk by this guy who teaches you how to wipe your hands. You know how when you go to the bathroom you end up taking like two, three, four tissue papers? That’s such a waste of resources.

So, this guy did the math and he comes up with this astronomical number as to how much trash we can save if we do two simple steps: When you wash your hands you kind of shake off the water, you know just wipe it off, and then you take one tissue paper and you fold it in half and you wipe your hands. Boom! Dry.

I’ve tried it, I’ve tested it, it works and I do it every single day. And it’s simple. That’s the whole idea of TED, right. It doesn’t have to be some Ph.D. level math that gets you into a TED talk. It’s simple stuff also. Groundbreaking daily change is what TED represents.

For me, it’s a great representation of TED, and the idea sticks with me because whenever I see people in the bathroom taking like three or four sheets — come on! You can do better than that.

That’s the most influential one. My favorite one would be, this was the first TED talk that I’d ever seen it was like back in 2009, it was this guy who invented the sixth sense device — you can even look it up on TED — it basically uses your fingers for three dimensional depth. It’s like a phone but in three dimensions. You can wear the glass and see it, kind of like a Google Lens.

How did you get involved with TEDx at Mason?

I have been involved with TEDx in general for many years. I did a TEDx club in my high school for two years. I was the president there as well and that is why, when I came to campus, I had a strong vision that I wanted to continue my path and I wanted to continue my passion for this, and that’s when I found the TED club and was like, ‘Hey, I’m interested in being a board member,’ and then I reached out to them a couple of times. They had a position opening and then they came back to me and that’s how I got involved.

Have you been to any of the TEDx conferences that we’ve had here at Mason?

What are you most excited about?

I want to see everything fall into place, you know, the months of planning that have gone into it. It’s very satisfying for me to see everything work like clockwork. But I’m definitely excited to see the ideas that people come up with because that’s all that this is about. I want to have a great turn out. It’s going to be in the Johnson Center Cinema, by the way. So, good space, centrally located.

For someone who doesn’t watch TED how would you pitch finding the time to watch a talk?

In that case, I think one thing is very clear: TED has something for everyone. If they haven’t found the interest in TED in general, it’s because they haven’t found their niche in it. They just have to dig deeper and they will find something for sure because there are so many talks, from subjects like gaming to math to just even music. TED also has a lot of musical performances and if you’re an exemplary musician, well, you get featured on TED as well. There’s something for everybody. TED stands for Technology, Entertainment and Design. It’s very encompassing for everything.

Why do you think the TED lecture series is important?

I think this ties in with my major, which is economics. I definitely believe in the idea that education is the way to the empowerment of societies. It is the way to bring about any tangible sustainable change in our lives. So, TED is a platform definitely where a lot of ideas can be communicated and have an impact because you’re teaching someone, anyone, something that can bring about slow changes like the little snowball effect. One person starts to do it and then another one and another one, [it] snowballs into more impactful changes. That’s why I truly believe in the power of TED.

How would someone get involved with TedXGeorgeMasonU?

So, to attend the conference, well, it’s free. You can get your tickets from the Student Involvement Office once sales go up, but to be a part of the organization committee, we will send out applications for that after the conference. So, you can definitely apply and be interviewed to be the next president and vice president.

What does it look like to be a part of the board?

Running the risk of oversimplification, it’s like any other organization where you have lots of tasks, but then these tasks are more specific in terms of TED. We have a speaker’s committee whose job is basically to find speakers who will fit our theme, the TED criteria, the TED guidelines. It’s a lot of meticulous … making sure that we don’t cross any TED rules, because TED has a lot of guidelines to how their conference should run. So, we have to keep a lot of that in mind.

We’re not a typical Registered Student Organization … we don’t have to adhere to quite a few of [the] RSO guidelines, so it’s kind of different in that sense, but it’s a lot of fun because you’re creating tangible impact in society, so it’s that good satisfaction that you can go home with at the end of the day. That, ‘Hey I’m making a change and I’m an important part of change in society.’