Literary game show visits for Fall for the Book 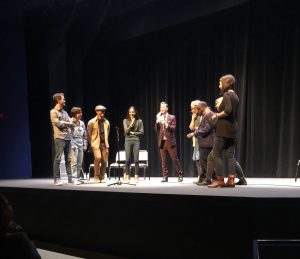 On Saturday, Oct. 12, the extravaganza known as Literary Death Match performed their 502nd show as part of the Fall for the Book Festival in Harris Theater.

Now in its 10th year, this out-there reading performance was created by Adrian Todd Zuniga to bring together some of the best parts of game show culture and literary performance. The show has visited 64 cities around the world. After visiting Mason, its next stops include Austin, San Francisco and Miami.

According to their website, each match is “part literary event, part comedy show, part game show.” The event pits four prominent writers against each other in a dramatic, head-to-head seven-minute reading of their choice. Two by two, performers face off to impress a panel of judges that change from show to show.

After the head-to-head readings, the panel of judges chooses which of the performers will advance to the next round. The judges for each event were selected to fulfill the three different categories that competitors are judged by: literary merit, performance and “intangibles.”

The readings were powerful, intense and dramatic. The writers read book excerpts, poetry and short stories that were beautifully organized and filled with moving thematic content. Each of the artists boldly presented their work with a familiarity and attachment that was very emotional.

But the intensity of the content contrasted strangely with the attempt from the judges and Zuniga, also the host of the event, to provide constant comedic entertainment. The whole night, seemingly intentionally, brought the audience up and down from serious literary highs to the occasional comedic low.

Mixing the two is an ambitious project. It mostly made for an entertaining way to orally present quality literary content, which was provided in spades by each of the participating writers. However, sometimes the contrast was too much.

For example, prior to starting his reading, Scott dedicated his performance to his recently deceased mother. Afterwards, one of the judges mistakenly made a quip about his mother while discussing his work (a truly cringe-worthy moment).

The prior example only highlights the perils of mashing together two things that are so opposite — serious writing and jokes. But overall, the show was entertaining, lively, nerdy and unpretentious.

The host and judges were funny, and the writers expressed their personalities in a way that could never be picked up simply off a page.

After the two head-to-head competitions, the two winners, Johnson and Dalcher, then drafted a team to compete against each other in a guessing competition that substituted the names of characters from popular books with members from the Trump circle in Washington.

In the same vein, the game was absurdist, nerdy and hilarious. After advancing to sudden death, Dalcher pounced on the final question to win the competition.

When asked to comment on her victory, she looked at the younger Johnson (her competitor) and said “I’m going to die before you. I would, personally, trade my medal for another few years.”