Mason community comes together to celebrate and acknowledge immigrant presence 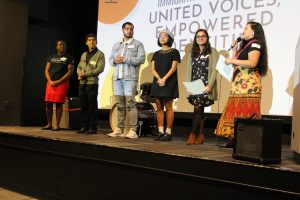 Titled “United Voices, Empowered Identities,” the event focused on the diverse immigrant experience within the Mason community and beyond. Speakers shared their stories however they felt most comfortable, while student performers like Hojin and the Boyz and FCA Culture Group added to the event as well.

“We still have to keep doing a better job in making sure we’re inclusive of all identities when you talk about immigration,” Asian Pacific American Coalition President Justine Suegay said. “Even though in the past few years we have definitely been starting to shift more [in talking about] the diverse identities of immigrants, there’s no stopping.”

Maricielo Ampudia Gutierrez, Mason DREAMers’ internal vice president, shared her story artistically. A senior creative writing major, she shared two poems and a monologue about her experiences being an American immigrant, traveling to Peru and meeting members of her extended family for the first time.

HSA President Nelcy Rocha Meneses also used poetry to discuss her experiences. Bullied through elementary, middle and high school, Meneses wrote a poem about how this experience affected her and made her want to become a role model to her younger self. After she read the poem, Meneses listed all her identities, personal as well as professional.

Others told their stories in a more traditional manner. Former DREAMers President Rodrigo Velazquez had spoken at the Immigration Monologues in 2013 during his sophomore year. There, he revealed he was undocumented, gay and could not continue his education because he lacked the money to do so. After Velazquez shared this information, which occurred while onstage with former Mason president Ángel Cabrera, he ended up being able to stay at Mason after all.

Six years later, Velazquez graduated from Mason and is a legislative aid to Delegate Kathy Tran. He now has a green card, and shared during his speech that he would be applying for citizenship in three months.

“I do think we can win, because that’s how we do this,” Velazquez said. “We tell our stories, we fight, we don’t give up, we support one another. We empower ourselves in every single aspect of our identities.”

Al Fuertes, an associate professor in the integrative studies department, also gave a traditional speech. He has been awarded multiple honors in his career, including the 2015 Spirit of King Award and the 2014 Oscar Mentoring Excellence Award.

“The fact that this event has given us the opportunity to become the authors and narrators of our stories,” Fuertes said. “I think that’s so liberating, instead of always having other people putting words into our mouth when we actually can do that.”

Other speakers at the event were sophomore government and international politics major Mya Billingsley, as well as senior individualized study major Amini Bonane. During her time at Mason, Bonane has founded Brains Then Beauty, a woman’s mentorship program on campus.

During Bonane’s speech, she discussed her experiences as a black woman and how her life has included multiple diverse experiences. To make her point clear, she had the crowd declare: “There is more than one way to be black, and black is beautiful.”

During her performance, Billingsley shared an original spoken-word poem called “Pledge of Allegiance.” It discussed the intersections of being African-American and living in America.

“They made sure I forgot my name, and now you do the work for them and making sure I never remember what that was,” Billingsley said in her performance. “Listen. How can they sit here and say Jesus was a white man when he died the brownest way possible, with his hands up, with his mother watching, crying at his feet?”

Suegay said that her favorite part of the Immigration Monologues series is being able to help share immigrants’ impressive stories on a larger stage, from her friends and classmates to the wider community around Mason.

“I think just seeing that impact is really good because you don’t really get to have this exposure all the time to such various immigrant stories, and I’m just glad to be able to help do that.”