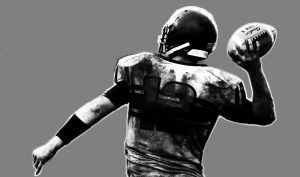 You probably drafted Devante Adams in the first or second round. Up to this point you may have been terrified that he was this year’s draft bust — but have no fear! The player that we all know and love showed up in Week 4. Quarterback Aaron Rodgers was looking for Adams early and often. Adams gained 67 yards on the first drive, which is more than his yards per game average through the first three weeks of the season (66 YPG). Unfortunately, Adams suffered a turf toe injury in Week 4 that led to him being ruled out against the Cowboys in Week 5. It’s a situation to monitor in the next couple weeks, but Adams is an every week start going forward.

Gardner Minshew, aka “Uncle Rico,” has been the most popular player in football this season (partially for his play, partially for his mustache). A sixth-round pick in this year’s draft, no one expected Minshew to play even one down of football this season. When starting quarterback Nick Foles went down, panic arose in Jacksonville. Little did they know that Minshew would step up and set a record for the best QB rating through their first four games (106.9). Right now, Minshew is sitting at QB18 in rankings — however, his schedule goes from one of the top-five hardest through four weeks to one of the easiest for the rest of the season. Minshew may not be ready to be trusted as your starting QB just yet, but keep an eye on Minshew Mania for the remainder of the season.

With all of the hype surrounding Odell Beckham Jr., Baker Mayfield and Jarvis Landry this offseason in Cleveland, it may come as a surprise to you that Nick Chubb is the only one worth mentioning here in Week 5. Chubb has simply looked like a man playing against boys so far. He’s currently the RB4 in PPR formatting and isn’t playing for a necessarily “explosive” offense either. In Week 4, we saw Chubb go untouched on an impressive 88-yard touchdown run and finished the day with 183 total yards on 23-touches and added three scores as well. It’s not unrealistic for Chubb to finish as the RB1 this season even with running back Kareem Hunt coming back from suspension after Week 8.

While the Browns as a whole looked better in Week 3, Baker Mayfield was still very underwhelming from a fantasy perspective. He had his best fantasy performance of the season in Week 4, however he only put up 19 points (Yahoo Standard Scoring). The second-year player only has four touchdowns through the air this season while throwing six interceptions. Currently the QB22, Mayfield is vastly underperforming his top-five projection from the beginning of the season. While we all know Mayfield is a talented young QB who has a bright future ahead of him, his fantasy relevance is low right now. Baker Mayfield is getting close to being a waste of a roster spot on your fantasy team.

Yes, I know, another Browns player is being featured this week — but OBJ deserves a spot on this week’s disappointments. We all know how talented OBJ is. We saw him do things in New York that very few if any other humans can do. But the fantasy world is very different from the real one. This year, Beckham is currently WR28 after being drafted in the first or second round in most drafts this year. In week four, where Baker Mayfield threw for a season-high 342 yards, Beckham only contributed to 20 of them on two catches. You probably drafted him too high to drop him this early in the season. But the next time that OBJ has a good game, look to sell high on him to another team in your league.

As a Redskins fan, there are few players I love to see on this list more than Kirk Cousins. Cousins’ time in Minnesota has been … disappointing up to this point. You expect a lot from a quarterback who has two of the best wide receivers in the league and maybe the best running back at the moment. However, Cousins seems to disappoint people in both the fantasy world and reality. He is currently the QB25 and is coming off a game where he threw for 233 yards and no touchdowns or interceptions. Following the game, his star receiver Adam Thielen angrily said, “You have to be able to throw the ball” in response to Cousins’ game. With his own players disgruntled about his play, it would be wise to drop Cousins if you still have him on your team.

Many of us thought Jameis Winston was just going to be another first-round quarterback bust in the NFL. Winston, in his fifth season, came in knowing his job was on the line and he’s playing better as a result. It helps that he has an offensive-minded wizard of a head coach in Bruce Arians, but Winston just looks more focused. So far, through four weeks, he has thrown for 1,167 yards and nine touchdowns. He also has a QB rating of 95.8 which is a career best. He’s currently the QB8 and looks to have a great connection with his weapons on offense. Winston needs to be owned in all leagues.

Wayne Gallman played great in his replacement start for Saquon Barkley. The second year back had 18 carries for 63 yards and a touchdown on the ground, while adding six catches for another 55 yards and a touchdown through the air. This was easily the best performance of Gallman’s career and it came at a great time. It should be noted that the Giants were facing a lost Redskins defense. With that being said, as long as Gallman continues to see that same type of volume in Barkley’s absence, he will be fantasy relevant and can be put into lineups with confidence as an RB2 or FLEX play.

We’ve seen flashes of what Fournette can do. There’s no doubt that he is a very talented football player. The questions for Fournette have been about his health, and if he can put up numbers on a bad football team. So far this season, Fournette has seemed to stay healthy and the Jaguars have looked better as a team with Gardner Minshew under center. These have helped Fournette quietly produce a very good season so far. He is currently RB11 and has been consistent up to this point. Week 4 is what got everyone’s attention on Fournette though. In a week where six running backs had multi-touchdown games, Fournette was the fourth best runner and didn’t even have a single trip to the endzone. He ran for a whopping 29 times for 225 yards and caught two passes for an extra 20 yards. The game plan was simple for the Jags: get Leonard Fournette the ball. If this is the plan for the rest of the year, be excited that you have Leo on your team.