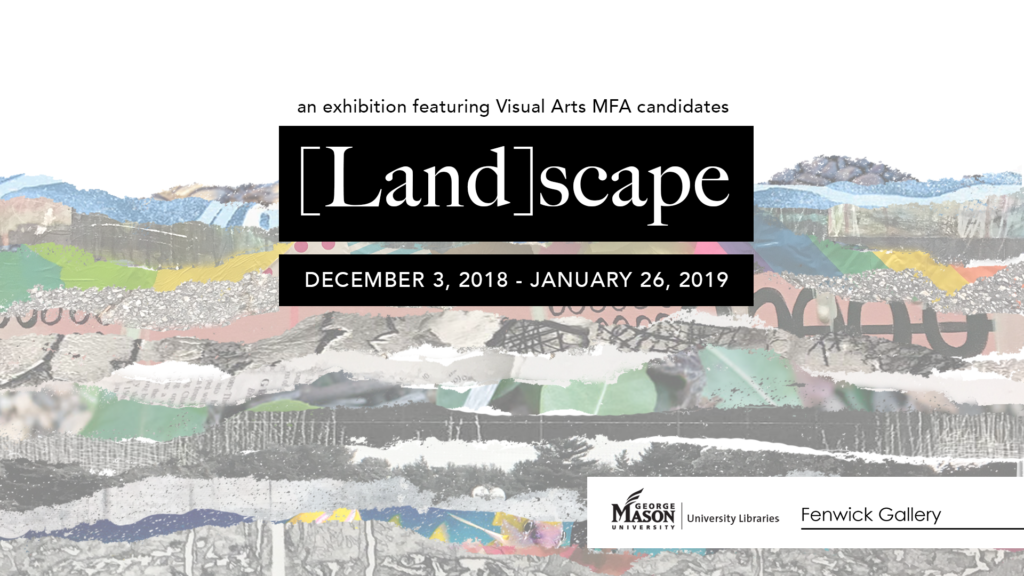 The Fenwick Gallery hosts a reception for the current exhibition, [Land]scape

Fenwick Library is not only a space for studying, but also for creative innovation. The library hosts several exhibits in its main lobby throughout the year, with the current exhibition called [Land]scape.

It seeks to engage the audience in the notions of landscapes that are around people everywhere. On Wednesday, Jan. 23, the Fenwick Gallery hosted a closing reception in the form of a performance and artists’ talk, where several of the artists showcased in the gallery had the chance to discuss their inspiration and work.

The reception began in the gallery itself with a performance from Bunni from Andiland, who gave out lollipops to the group. Bunni is the alter ego of gallery artist, Andrea Benge, who said, “Bunni is meant to invite you into the painting … so you can live inside and have fun.”

The artists included in the talk were Andrea Benge, Danielle Dravenstadt, Kate Fitzpatrick, Emily Fussner, Jayne Matricardi-Burke, Matt Nolan and Kevin Wallace, many of whom are visual performing arts majors. The panel was moderated by artist and gallery director of Olly Olly, Jessica Kallista.

The purpose of the exhibit was to make known that which is unseen by “exploring things that are hidden in plain sight,” Nolan said. The goal of his photographs, which “document” homomutatus clouds man-made clouds that form due to human activities, is meant to make what is invisible or overlooked visible. “For me,” he said, “that invisible should be chased after.”

Matricardi-Burke’s work consists of photo transfers and acrylic on a canvas that conveys a quiet suburban street. When talking about her “[suburbia]scape”, she said “[the] piece is about the feeling I got when I first moved to a new neighborhood.”

Though their works are visually different, Wallace and Matricardi-Burke’s works speak to the same invisible “wounds.” Wallace, diagnosed with PTSD, uses art to express that which is not seen but is strongly felt. He works closely with refugees who he believes “are invisible people in a politically loud climate,” he said.

In a similar manner, memory also plays an important role in the art. “[I] had a very superficial childhood,” Benge said, “but later, when I was doing work, a past trauma seeped through.” To her, surrounding herself with “fun things” is how Benge dealt with it. Fitzpatrick also used her art to practice mindfulness. “[It’s] a form of meditation,” she said, “a break down of language.”

The exhibit’s curator Emily Fussner was influenced by her first-year teacher in her curating of [Land]scape, who also has a piece in the gallery. Though the art is so varied, Fussner said, “I wanted to connect all the pieces.”

The MFA program at Mason is what makes the showcase possible. “Being in the MFA program and getting others to see your work and the feedback is very important,” Dravenstadt said.

The reception was put together by Fussner and Stephanie Grimm, manager of the Fenwick gallery. The exhibition will be on display until Feb. 1.

Lead Singer of Cinema Hearts Shares Inspiration for Her Music