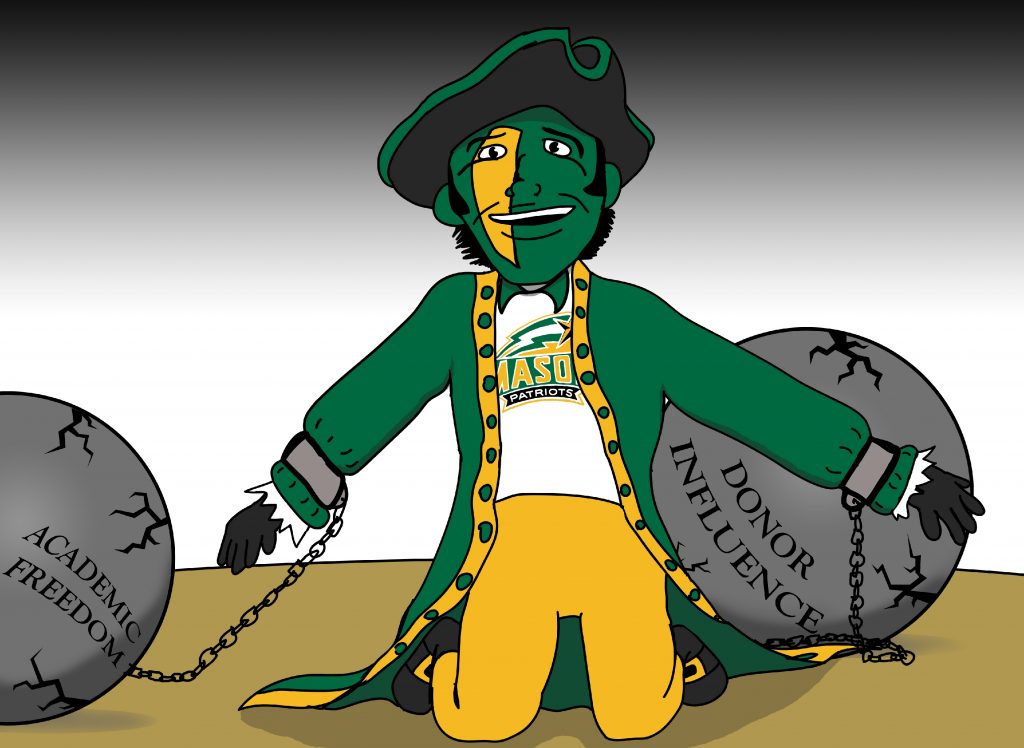 Mason’s Faculty Senate resumed meetings last week on Oct. 3, with an address from President Cabrera and an ensuing discussion between members of faculty. Protestors from Transparent GMU were also in attendance, positioned at the back of the room in silence, holding signs that called for donor transparency.

Following Cabrera’s address, questions were asked regarding the ability of the university’s buildings and classrooms to keep up with the growing number of new students. President Cabrera cited the construction of Peterson Family Health Sciences Hall. He suggested that this would offset the increasing number of students and stated that a high demand of students is a good problem for a school to have.

Turning to questions of donations within Mason, concerns were raised by Dr. Bethany Letiecq, a professor in the Human Development and Family Science Program, about Mason’s transparency and the connection between the Mercatus Center and Mason. Cabrera agreed that transparency is paramount to maintaining Mason’s academic integrity and cited efforts by the Internal Review Committee to examine donor agreements, but disagreed with the notion that donor agreements as they currently stood influenced Mason’s academic integrity.

Nancy MacLean, author of “Democracy in Chains,” a critically acclaimed book about the effect conservative policymakers have had on democratic governance, expressed bemusement at the idea of donor agreements not carrying with them any burdens upon the school.

“It’s great to have donors in universities,” MacLean said. “Donors play an important role, but donors shouldn’t have the kind of control that Charles Koch has had, and they shouldn’t be able to leverage a university.”

As for the Mercatus Center’s relationship to Mason, when asked whether Mercatus was a 501 (c)(3) tax-exempt entity or part of the school, Cabrera simply replied, “Yes.”

Following the president’s address, Dr. Michelle Marks, vice president of academic innovations and new ventures at Mason, spoke about the initiatives Mason is currently in the process of researching and implementing. Among these was a focus on Advance, a program at Mason that helps to support transfer students in Virginia, as well as broaden the scope of online education at the university.

Marks noted several times that the office’s initiative to moving more classes online was in an “exploratory” phase but stressed the importance of reaching underserved “non-traditional” students with broader options for accessing Mason courses.

Letiecq discussed efforts to expand Mason’s online education offerings, in particular the pitfalls that she hoped any such initiative would not fall into.

“We must sell [non-traditional Mason students] something that is of the highest quality with the Mason brand, so they can be highly competitive in the labor market,” Letiecq said. “If we sell a low-quality product and they’re spending a lot of money purchasing that in a convenient online format, it could have low returns for them and their livelihood.”